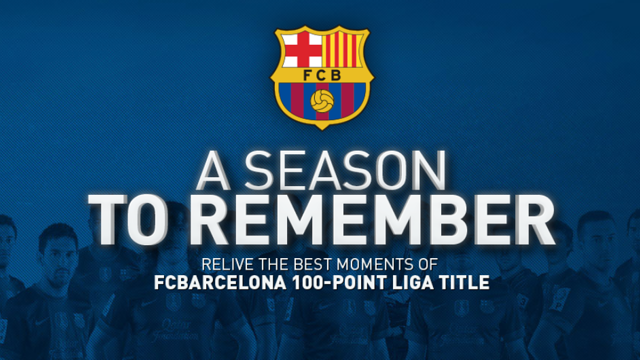 FC Barcelona’s 2012/13 Liga campaign was certainly a memorable one, and now it’s time to take a look back at what the Blaugrana accomplished

The 2012/13 Liga season saw FC Barcelona equal the all-time record for points won in a single season. The Blaugrana secured an eye-opening 100 points from 38 matches, a feat only equalled by José Mourinho’s Real Madrid the previous season.

Even though the team broke records it’s evident that this season has been anything but easy for the Blaugrana. Tito Vilanova and Éric Abidal were both forced to step away from their duties at Barça as they successfully dealt with their respective illnesses.

It’s the ups and downs that make a season memorable, and this year was one for the history books at Can Barça. In addition to the 100-point record, and the illnesses Vilanova and Abidal dealt with, there were also a handful of individual records that were broken. The records that perhaps stand out the most are Leo Messi’s. The Argentine broke Gerd Müller’s all-time record for goals scored in a calendar year and, at the end of the season, he secured the Pichichi trophy and his third Golden Boot award.

INTERACTIVE REVIEW OF THE YEAR