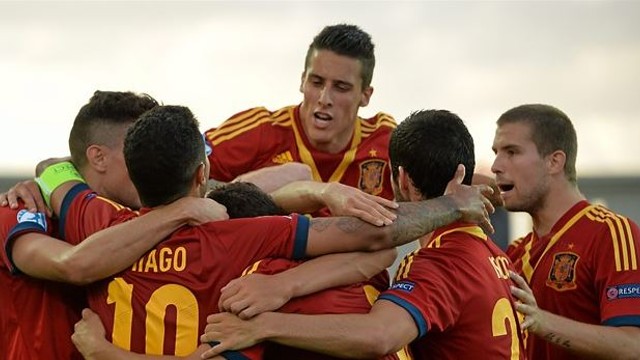 The U21 Spain side secured a place in the U21 European final thanks to goals from Rodrigo, Isco, and Morata

FC Barcelona will be represented in the U21 European Championship final. Spain, featuring five Barça players on the team, defeated Norway in this afternoon’s semifinal. Spain manager Julen Lopetegui named Montoya, Bartra, Thiago and Tello to the starting line-up, and left Marc Muniesa on the bench.

Spain dominated the first half from beginning to end. The Iberians besieged Norway’s goal, but the keeper Nylander Hskjold was up to the task. Isco had the first chance, and Tello also came close to giving Spain the lead.

On 25 minutes Bartra was booked after the referee deemed that the Barça player had simulated a penalty. Spain kept on trying and their perseverance paid off in the last minute of the first half. Rodrigo latched onto a loose ball and made it 1-0.

Norway came out swinging in the second half, but they were unable to equalise. Spain fired for two more goals at the very end of the game to secure passage to the final.

Spain will face the winner of the Italy-The Netherlands semifinal on Tuesday.