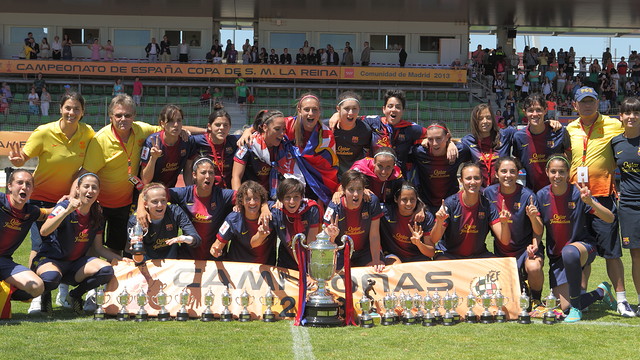 The Barça women’s team has rounded off a spectacular season by winning the Queen’s Cup at the Ciudad Deportiva de Las Rozas (Madrid). The players managed by Xavi Llorens beat Prainsa Zaragoza 4-0 in a great match with an outstanding goal from Alexia to lift their third trophy of the season – League, Copa Catalunya and Queen’s Cup.

Barça dominates from the start

The match started with pressure from both sides but Barça soon created the first danger when Melanie Serrano pounced on a cross from the right.  Zaragoza keeper Jamila Martins did well to save.

The Zaragoza players began to tire and in the 25th minute midfielder Vicky Losada took advantage of a great through ball from Míriam Diéguez to open Barça’s account after the Zaragoza keeper could only block the first effort.  The goal opened the floodgates as the Zaragoza resistance crumbles.

Sonia Bermúdez and Olga García combined to score the second but the icing on the cake was provided by Alexia, who beat two opponents and left keeper Jamila Martins helpless on the ground to score the third and best goal of the match.  At half time Barça led 3-0.

Pace slackens in second half

The second half followed a similar pattern to the first half.  Prainsa Zaragoza tried to step up the pressure but Barça remained vigilant despite taking their foot off the accelerator.  Both teams suffered under the intense Madrid heat.

Zaragoza had a chance to get one back but Barça keeper Laura Ràfols turned a María León free kick for a corner.  In the 22nd minute, second half substitute Kenty Robles ran on to a great pass from Sonia Bermúdez but failed to convert the chance.

In the final quarter of an hour Barça scored a fourth.  A free kick taken by Vicky Losada was missed by everyone and went straight into the net.  An excellent game and a great victory which was watched from the Directors’ Box by Board members Jordi Mestre and Susana Monje.