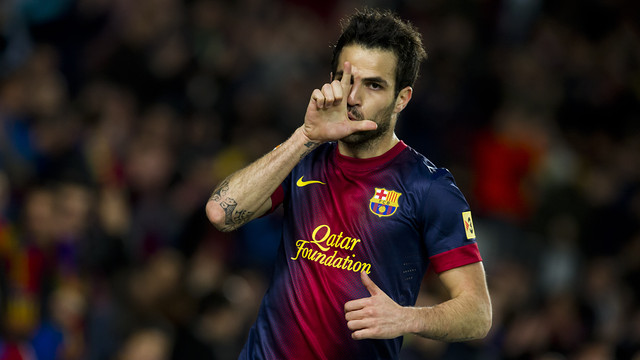 The FC Barcelona midfielder says that his move from London to Barcelona has helped his career because “you’re playing with the best, which means you automatically have to move up a level to match the standards they set”

After Spain’s 2-1 victory over Uruguay in the Confederations Cup, Cesc Fàbregas sat down with FIFA.com to talk about his role within La Roja and what his move to FC Barcelona has done for his development as a player.

“I think moving to Barcelona was a very important step for me, because of the system and also because you’re playing with the best, which means you automatically have to move up a level to match the standards they set. You learn something in every training session and you have to give your very best,” said the midfielder who’s enjoying an ever increasing centre-stage role for Spain since he made the switch from London to the Catalan capital.

On his international career with Spain, Cesc noted that “the boss [Vicente del Bosque] has made me feel special […] I started virtually all the games at the EURO and I’ve been in the side a lot since then too. I’m very happy about that, especially as it’s all been down to hard work and staying patient.”

When asked about Spain’s chances of claiming the only international title that’s eluded the two-time Euro champions and current World Cup holders, Cesc declared: “We’re just trying to play our game and our tournament. We can win it, just as long as we do what we know best, which is to keep possession and control the pace of the game. When we do that, we’re very difficult to beat, as we’ve shown.”

The midfielder is also confident that Spain’s reign at the top of world football is far from coming to an end. When asked how far Spain can go, he was unequivocal in his response: “As far as we want. This team’s made a habit of doing well and has a style all of its own. As long as we can maintain the standards we’ve set, there’s no reason why we can’t keep these good vibrations going.”