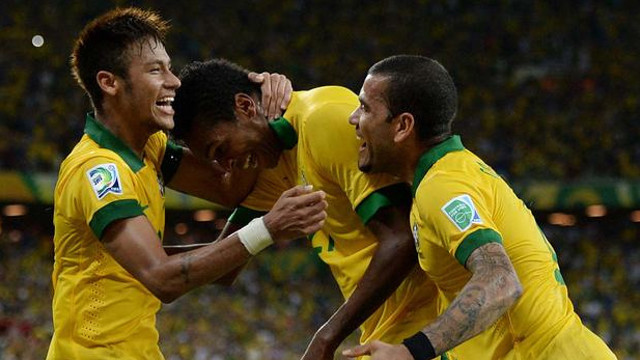 The two teams including Barça players have already virtually booked their places in the Confederations Cup semi-final.

All eleven Barça players playing in the Confederations Cup are through to the semi finals after both Spain and Brazil won their first two games in the completion to book a place on the last four.

Brazil meet Italy in the final game of Group A, with a win ensuring top spot and chance to avoid favourites Spain in the semis. After seeing off Japan(3-0) and Mexico(2-0), Neymar and Alves’ side need only a point against Italy to avoid Spain.

Spain virtually in the semis

With Barça players Valdés, Piqué, Jordi Alba, Busquets, Xavi, Iniesta, Cesc, Villa and Pedro all figuring in the first two games, Spain face Nigeria, who are on 3 points alongside Uruguay, in the final game of the group. Only a defeat against the African champions and a big win for Uruguay can stop Spain from going through to the semis.