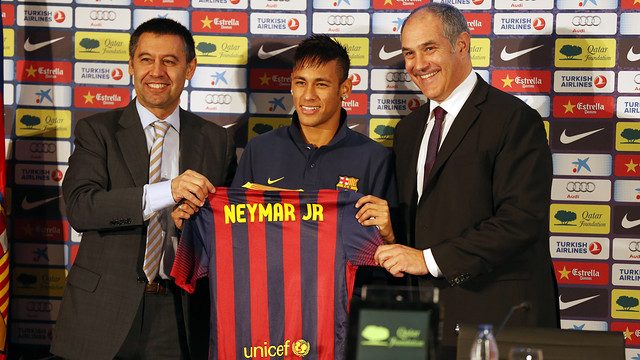 FC Barcelona vice-presidnet Josep Maria Bartomeu reveals financial details of the deal between Barça and Santos for Neymar, who now has a buyout clause of 190 million euros

Zubizarreta, who admits the Club received a scouting report on Neymar in 2011, is clear that “we will experience many magical nights of football at the Camp Nou”

Josep Maria Bartomeu explained that FC Barcelona have “an agreement with Santos that has nothing to do with the Neymar deal. It’s a collaborative agreement that allows Barça to take a first look at the players Santos bring up from their youth system. We have this agreement with other clubs as well.”

FC Barcelona vice-president, Josep Maria Bartomeu explained the cost to acquire the services of Neymar da Silva Junior for the next five seasons. FC Barcelona will pay a total of 57 million euros for the Brazilian star, which will be distributed among three companies (DISC, TEISA, N&N) and Santos FC, Neymar’s old Club. The companies have asked FC Barcelona to keep the percentages of the transfer sum allocated to each entity confidential.

Bartomeu specified that the cost of the player increased “due to the interference from other clubs” in the latter end of the negotiations with Santos FC. He then went on to thank Naymar for deciding to play for Barça “seeing that our offer wasn’t the highest.” He added: “Neymar wanted to come to Barça and that helped us a lot seeing that the amount of money we were willing to offer, 40 million euros, only increased to 57 million euros.” Another reason Neymar’s price went up was “because we had hoped to bring him in 2014, and there’s an extra cost for bringing him earlier.” In any event, Neymar’s price tag won’t influence Barça’s transfer budget for the 2013/14 season seeing that “we have a good cushion,” explained Bartomeu.

The vice-president also revealed that Barça had first contacted Santos FC and the player in 2011 and that’s why last year’s budget reflected a 10 million euro downpayment on the player’s services. FC Barcelona expects to pay the full sum for Neymar over the next three years.

Bartomeu went on to thank those who were involved in the process to bring Neymar to FC Barcelona, especially Raul Sanllehí and Andre Cury, who has been FC Barcelona’s representative in South America since 2012.

The vice-president also noted that the deal between Santos and Barça for Neymar was done without the help of intermediaries. Bartomeu went on to say that Neymar’s buyout clause is set at 190 million euros.

In addition to a monetary transaction for Neymar, Santos FC and FC Barcelona have also agreed to hold two friendlies between the teams. One of the matches will be played at Peixe stadium and the other at the Camp Nou. Bartomeu explained that it’s very likely Santos FC will feature in the Gamper Trophy this summer and that “good attendance would help offset the cost of new signings.”

“He could become a leader in the world of football”

Andoni Zubizarreta, FC Barcelona’s football director, talked about what initially made Neymar interesting to the Club. Zubizarreta referred to the first scouting report on the Brazilian the team received after the U20 World Cup. “He can score, he’s very capable at combining with players [passing] and he takes players on.” He continued: “Neymar is neither affected by his surroundings nor the weight of responsibility.” The football director concluded, “he’s one of the biggest talents [in the tournament], he could become a leader in the world of football.”

Zubizarreta is clear that with Neymar on the team “we will all experience many magical night’s [at the Camp Nou] because Barça have an extraordinary team.” He continued to say “Neymar is a great player because of his way of taking on players and how he finds solutions. He will integrate well into the team.”

Finally, Zubizarreta cleared the air about what number Neymar will wear on his shirt next season. “The number 11 is currently taken by Thiago,” said Zubizarreta, who added that the players agree at the start of each season on how the numbers are divvied up.

Our offer wasn’t the highest, but Neymar wanted to come to Barça and that helped us a lot seeing the amount of money we were willing to offer, 40 million euros, only increased to 57 million euros
We will all experience many magical night’s [at the Camp Nou] because Barça have an extraordinary team