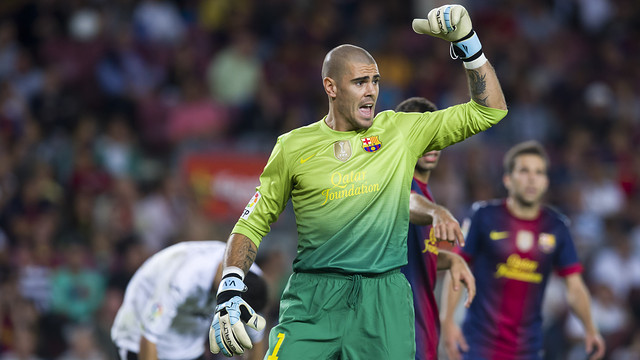 The FC Barcelona keeper reached his 500th official match in the Blaugrana strip, a feat only Xavi, Puyol and Migueli have achieved

Víctor Valdés took his place among a select group of FC Barcelona players this Sunday as he completed his 500th match in the Blaugrana strip. Up until today, only Xavi, Puyol and Migueli had accomplished this feat. The current Barça keeper has featured in 359 La Liga games, 104 Champions League matches, 12 Copa del Rey games, 5 UEFA Cup matches, 10 Spanish Super Cup finals, 3 European Super Cup games and 6 Club World Cup matches. The keeper has won a total of 20 titles in his 500-match odyssey with Barça, among them 6 Liga titles and 3 Champions Leagues.

Since his first team debut, in September of 2002, Valdés has surpassed the most emblematic keepers in FC Barcelona history, like Zubizarreta – who played a total of 410 matches – and Ramallets, who featured in 384 matches in the Blaugrana strip.