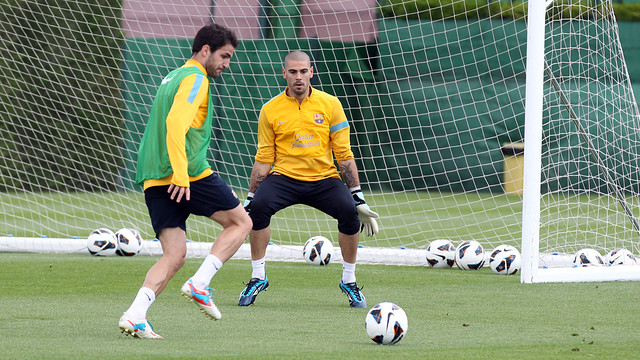 The Barça squad returned to training on Tuesday to prepare for the last two matches of the season. First up is the final of the Copa Catalunya against Espanyol on Wednesday.

The session, with Tito Vilanova in charge, included all available players from the senior squad plus Oier, Espinosa, Balliu, Deulofeu, Sergi Gómez, Sergi Roberto, Rafinha and Patric from Barça B

The players were back on the Club’s training grounds at the Ciutat Esportiva Joan Gamper on Tuesday morning – following a day off on Monday – to prepare for the last two games of the competitive season. The first match is on Wednesday evening when Barça takes on Espanyol in the final of the Copa Catalunya.

Tito Vilanova led today’s session with Oier, Espinosa, Balliu, Deulofeu, Sergi Gómez, Sergi Roberto, Rafinha and Patric, from Barça B, joining the first team squad. Tello, Thiago, Bartra, Montoya and Muniesa were all absent on international duty with the Spain under 21s while Dani Alves has already left to join the Brazil squad for the FIFA Confederations Cup.

Meanwhile, Abidal, Messi and Puyol all continued with their individual recovery programmes. For his part, Adriano was able to take a full part in training. Today he is due to sign a contract renewal at the Club’s offices.