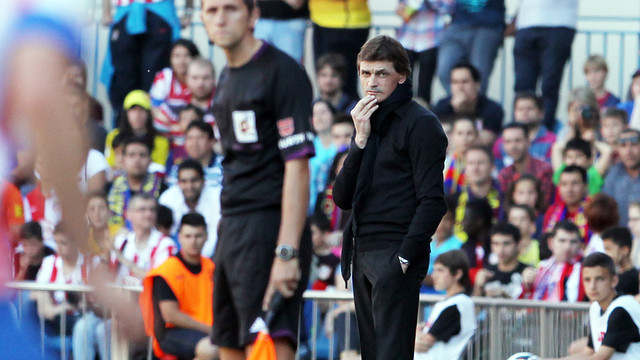 The FC Barcelona manager considers the season to be “a good one,” and he highlights that “winning the league after not winning it last year is fantastic!”

“The hardest thing to do in this sport is to win after you’ve already won everything,” he adds

Tito Vilanova was very clear after this afternoon’s match at the Vicente Calderón: “we’ve been the better team in La Liga, without a doubt. We knew that we had to win as many points as possible at the start of the season because big teams usually drop points in the first games of the year. We started off well and that gave us a good advantage. After that, when everyone said the league was already won, we were mentally strong to hold of a Real Madrid side that played an exceptional second half of the season.”

He added: “winning La Liga a year after not winning it is fantastic!” When asked to rate the team’s year, Vilanova said, “a season where you win the league title is always a good season. We lament the fact that we were unable to compete better in the Champions League. Next year will be even more difficult but we’ll try to win it.”

The merit of staying on top

Vilanova also praised his players for their season-long ambition: “the hardest thing to do in this sport is to win after you’ve already won everything.” He then called for additional respect for players like Iniesta, Xavi and Puyol: “these players have won nearly one third of all the league titles in Barça’s history.”

When asked to give his impression on individual performances, the FC Barcelona manager simply said that “I consider this to be my fourth league title. I’m just as excited about this one than the other three. We have always worked as a team.” Lastly, when asked about the team’s objective of winning 100 points, he said: “if we have a chance to do it, we’re going to go for it!”

Vilanova is the sixth manager in FC Barcelona history to win the league title in his first season on the Barça bench.