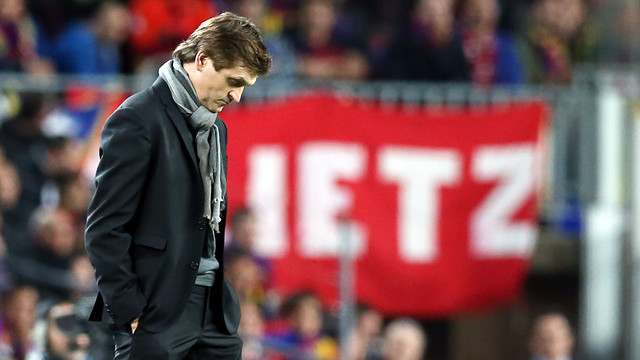 “I want to thank the fans, they supported us until the end”, said Vilanova

Tito Vilanova admitted that Bayern Munich were the superior side throughout the Champions League semi-final tie between the two teams. “I want to congratulate Bayern for reaching the final and for how well they played.” When asked about tonight’s match at the Camp Nou the manager explained that Barça “competed in the first half and in the second their early goal really put a lot of weight on us.” He added that his team “competed until the end, but in the end we couldn’t do it.”

The manager, who has been criticized for his management of the team this season, said “we’ve given playing time to all the players this year. We have never distributed the load more than we have this season.”

Vilanova also explained why he decided to sub out Xavi and Iniesta: “we had to score six goals and at that moment I thought we couldn’t do it. Xavi has been dealing with injuries and we have an important game this Sunday.”

On the team’s physical fitness level, Vilanova said that “these players have played over 300 games in the past five years.” He added: “the first half of the season through December was very good. But now it’s getting more difficult.”

The manager then talked about Leo Messi’s absence against Bayern Munich: “Leo played against Athletic because he was feeling good but at the end of the match he noticed a strange feeling in his leg. There’s no injury but after so many days of not training it can feel uncomfortable for a player and he could have picked up an injury if he had played.” He added: “when you have such a good player like Leo it’s normal for it to be noticeable when he doesn’t play.”

Song and Bartra, both of whom had great games against Bayern, were singled out for praise by the Barça manager. “Song helped us tremendously when Bayern countered, and it’s good for Bartra’s progress to play these types of games.”