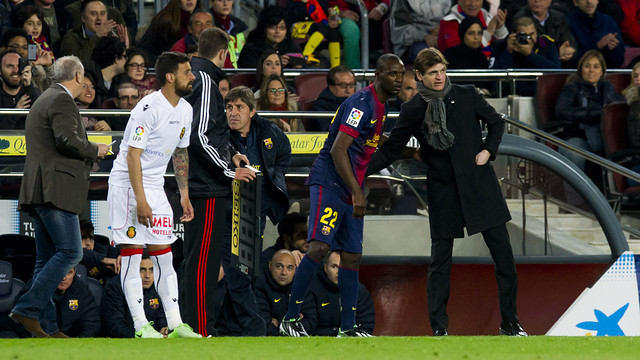 1. Victorious start to the season (FCB 5 – 1 R. Sociedad): The team started off the season with a bang at the Camp Nou. Carles Puyol scored the first goal for the Blaugrana.

2. Villa makes his return (FCB 5 – 1 R. Sociedad): El Guaje featured in an official match for Barça after fully recovering from the serious injury he picked up in the Club World Cup in December of 2012. He also scored against Real Sociedad.

3. Marvelous strike from Adriano (FCB 1 – 0 Valencia): Barça defeated Valencia thanks to a wonder strike from the Brazilian defender.

4. Xavi earns the points for the Blaugrana against Granada (FCB 2 – 0 Granada): The midfield maestro sent the ball to the back of the net in the dying minutes of the match to give Barça the lead, in added time Borja scored an own goal to seal the win.

5. Miraculous comeback (Sevilla 2 – 3 FCB): This was quite possibly the most difficult win for Barça in La Liga this year. Two goals from Cesc and another from Villa (in added time) gave Barça the win after they trailed Sevilla by 2-0 for most of the game.

6. Electric Clásico (FCB 2 – 2 R. Madrid): The Blaugrana came into the match without their starting centre backs. Messi and Cristiano Ronaldo, both of whom scored braces, were the goal scorers.

7. Crazy match at the Riazor (Deportivo 4 – 5 FCB): The match with the most goals in La Liga this season for Barça was at the Riazor. The Blaugrana took a 0-3 lead but Depor fought back. Messi’s hat trick was key in securing the points.

9. Best start to the season in the history of the competition (FCB 5 – 1 Athletic Club): A phenomenal match against the Basque side saw Barça claim the record for the best ever start to a league campaign: 13 victories and 1 draw in the opening 14 matches of the season.

11. Authoritarian leaders (FCB 4 – 1 Atlético Madrid): The Blaugrana fired for four goals against their closest pursuer in the table, which increased Barça’s lead to 9 points. Falcao scored the opener.

13. Four goals in 28 minutes in the Catalan derby (FCB 4 – 0 Espanyol): The Blaugrana sealed the win in under 30 minutes on January 6 of this year against city rivals Espanyol.

16. First defeat of in La Liga (R. Sociedad 3 – 2 FCB): On week 20 of La Liga, the first match of the second half of the season, Barça were handed their first defeat of the tournament. Real Sociedad fought back from a two-goal deficit to take all the points at Anoeta.

18. Something special, indeed (Celta 2 – 2 FCB): At Balaídos, Leo Messi became the first player in the history of Spanish football to consecutively score against every top-flight team.

20. Abidal returns (FCB 5 – Mallorca): One year and two months after his liver transplant surgery, Abidal made his miraculous return to professional football: he was subbed in for Gerard Piqué.

21. Messi’s slalom at the San Mamés (Athletic Club 2 – 2 FCB): Barça bid farewell to the San Mamés with a bittersweet draw. The Argentine scored one of the best goals of the year moments after he was subbed into the match.

22. Champions’ fightback (FCB 4 – 2 Betis): The Blaugrana practically secure the league title with the victory over Betis on week 34 of the competition.