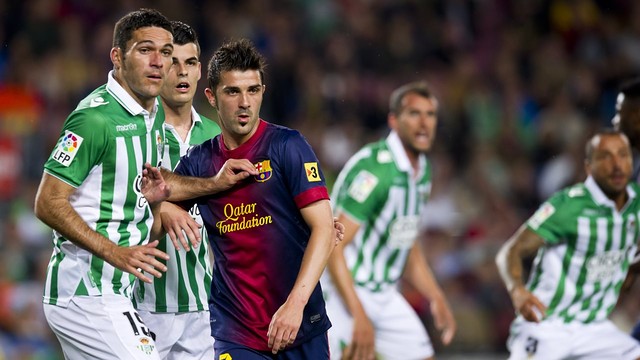 In this weekend’s action, Madrid’s win over Valladolid put any Barça title celebrations on hold, Valencia closed in on Real Sociedad and 5 of the bottom 6 took points.

Real Madrid refuse to lie down. Real Madrid were 0-1 down early on in their game against Valladolid and although they then scored twice through Ronaldo and a Valiente own goal, they were once more pegged back to 2-2 at the break. With seemingly little at stake, this might have been the game that last year’s champions finally gave way and handed the title to Barça, but Kaka and Ronaldo were again on target after the break and despite a late strike by Sastre for the visitors, the points stayed at the Bernabeu to postpone the Barça celebrations for a few more days.

Real Sociedad slip up in Getafe. Monday night’s La Liga game saw fourth place Real Sociedad go down 2-1 to a Getafe side who move up into the European spots. Real are just two ahead of Valencia – who crushed Osasuna 4-0 on Saturday and the Basque team’s coach Phillipe Montanier insistsed: “we just have to put that defeat out of our heads and concentrate on the next game”. In the final run in, Real have two more home games- against Granada and Real Madrid and trips to Seville and Deportivo, whilst Valencia are away to Rayo next week, before repeating Real’s fixtures at Getafe and Seville, with the visit of Granada to Mestalla their only home game in the last four rounds.

Relegation fight still tight. There’s still hope for the bottom six – but still the threat of going down, with just six points between basement side Mallorca and 15th placed Granada. Mallorca (29 points), Celta(31) and Deportivo(32) all took a point at home, but Zaragoza’s 3-0 win over Rayo took them out of the bottom three with 33 points – level with the fast sinking Osasuna, who were thrashed in Valencia, whislt Granada made it three games without defeat by beating Malaga 1-1 and move above the Basques on 35 points