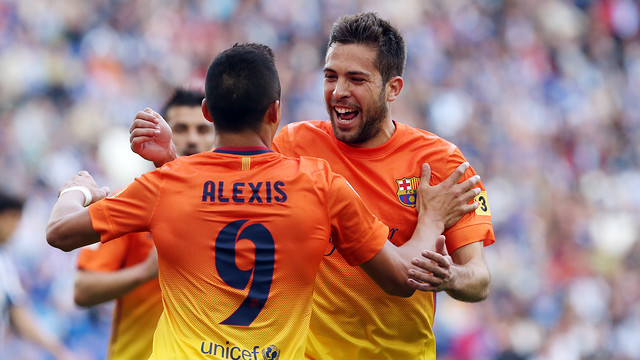 There are plenty of curious facts to examine following Sunday night’s win away to local rivals Espanyol:

– The win at Cornellà was Barça’s 14th on the road this season, equalling their own Liga record.

– They also made it to 52 goals as visitors, which beats the record set last season by Real Madrid.

– In total, Barça have scored 71 goals outside of the Camp Nou this season. As well as the 52 in the league, they have claimed 10 in the cup, eight in the UCL and one in the Supercup, which also beats the previous record held by Real Madrid since 2011/12 (69).

– Barça now have 97 points in the league, and if they win their last game of the championship against Malaga, they’ll make it to 100, and equal another record currently belonging to Real Madrid.

– After scoring again last night, Alexis Sánchez has scored in all four of his last appearances (he didn’t play last Sunday). In seven games, he has amassed six goals and five assists.

– Pedro made it to 10 Barça goals this season, the same number that he has scored for the Spanish national team.

– Thiago made his 100th appearance for FC Barcelona. He made his first team debut on May 17, 2009 in a league game with Mallorca.

– Barça totally dominated against Espanyol, with 70% of the possession. They had 10 shots, of which four were on target and another hit the woodwork.