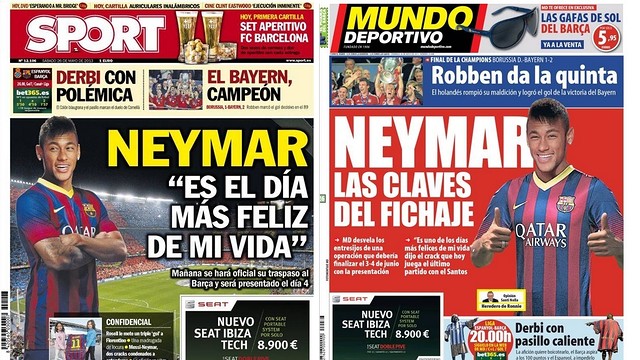 Neymar took centre stage this Sunday after he announced his plans to sign with FC Barcelona last night on Twitter and Instagram. The news quickly spread across the world as international news outlets picked up the story:

Both the digital and the paper versions of Mundo Deportivo focus on Neymar’s deal with FC Barcelona. The front of the daily shows the Brazilian player in a 2013/14 Barça kit with the title “Neymar: The details of the deal.” The website reads: “It’s official: Neymar to Barça.”

Splashed across the font page of the Catalan daily is a photo of Neymar in the Blaugrana strip and a headline that reads: “Neymar: ‘It’s the happiest day of my life.’”

“He votes Barça,” says the front of the the daily El 9 Esportiu. The digital version of the daily reads: “Another victory [for Barça].”

“Barça sign Neymar” reads the Madrid-based daily. The lead story explains that the player will play for FC Barcelona for the next five seasons.

Neymar is also the protagonist in AS’ digital edition. “Neymar signs for FC Barcelona” reads the headline across the top of the Madrid-based outlet’s webpage.

The American news outlet notes that Neymar will report for duty in Barcelona after the Confederations Cup in June.

The British daily leads with “Brazil’s golden boy Neymar is ready for Barcelona.” The Independent then goes on to explain the latter stages of Neymar’s transfer saga, which came to a close after the player decided to pledge his future to Barcelona even though there was another offer on the table from an unknown club.

“Neymar to join Barcelona from Santos after agreeing five-year deal,” reads The Guardian. The news outlet then highlights the statement made by Neymar on Instagram last night: “I’m here with friends and family and they have helped me to write a few things here. I’m not going to hold out until Monday. My family and friends already know my decision. On Monday I will sign a contract with Barcelona.”

“Neymar offer accepted as Catalan derby looms,” reads ESPN this Sunday morning. “Everyone expects Neymar to keep his word and join forces with Lionel Messi, Andrés Iniesta, Xavi Hernández and the rest of the Blaugrana stars at the Camp Nou,” says Francesc Tomas, ESPN’s FC Barcelona correspondent. “The prospect of adding another reliable attacking threat would bring a new dimension to the team, giving Tito Vilanova a chance to evolve his current system.”

“Neymar’s mission in Barcelona,” screams the Brazilian sports outlet. The daily then goes on to explain why the Blaugrana leapt at the chance to sign the Brazilian youngster, stating that Neymar will give Tito Vilanova potent attacking option in addition to Leo Messi.

The Portuguese sports website, A Bola, leads with Neymar’s promise to sign for FC Barcelona on Monday. “The story is over. The Brazilian striker Neymar has decided to join the Catalan Club, who confirmed the deal on their website … The player will sign for five seasons.”

“Neymar announces move to Barcelona on social networks,” says the Brazilian daily. The outlet the highlights the forward’s online announcement: “I want to thank the fans of Santos for those nine incredible years. My feeling for the club and the fans will never change. Only a club like Santos FC could provide me with everything I experienced on and off the field.”

The Italian sports daily reads, “Neymar breaks the deadlock: ‘I’m going to Barça’”. The Brazilian, who “announced his move to Barcelona on Twitter,” will sign a five-year deal with Barcelona on Monday.