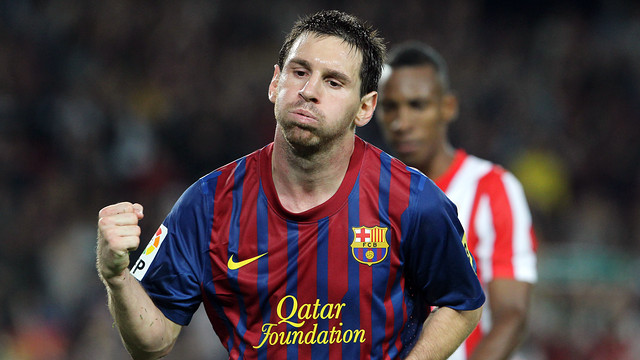 Leo Messi is Atlético Madrid’s worse nightmare.  He has netted no fewer than 20 goals against Atlético, 17 in the league and 3 in the Cup. And he’ll be looking to add to his tally this Sunday in the Vicente Calderón (kick-off 7 pm, GolT, Canal+ Liga).  They’re his favoured victim, followed by Real Madrid (18 goals).

Messi has notched up no fewer than three hat tricks against Atlético Madrid.  The first was in the first leg of the last 16 Cup match in the 2008/09 season, when his goals turned the tie in Barça’s favour in Madrid (1-3).  The second hat trick came two years later in a league match in the Camp Nou (3-0).  Just seven months later, at the beginning of the 2011/12 season, he added another as Barça thrashed Atlético 5-0.  So far, no other team has suffered three hat tricks from the Argentine international.

Messi has got on the score sheet in the last five consecutive matches against Atlético Madrid.  The last time he finished a match against Atlético without scoring was on 14th February 2010, when Barça lost 2-1 in the Calderón, with a goal from Ibrahimovic.