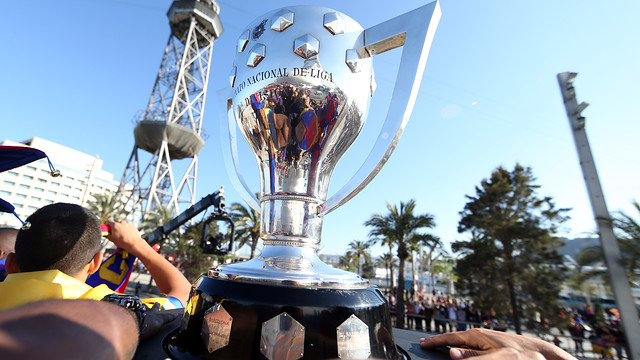 On Monday there was an open top bus tour of Barcelona.  And tonight there’ll be a party in the Camp Nou. FC Barcelona will be celebrating the Club’s 22nd league title, which was mathematically guaranteed eight days ago when Real Madrid could only draw away to Espanyol.  The party will begin at about 11 pm after the final whistle of the game against Valladolid (9 pm, Canal +).

Mascherano and Valdés ready for action

Manager Tito Vilanova welcomes back Javier Mascherano and Víctor Valdés after their injury layoffs.  Both players were declared fit to play by Club doctors on Saturday and will be available for selection.  However, Puyol and Messi will definitely miss the match through injury while Adriano, Abidal and Alves – who have been racing against the clock to get fit over the last few days – are all doubtful.  Barça will be looking to take the three points and take a step closer to equalling Real Madrid’s record total of 100 points set last season.

Valladolid can be relied on to put up stiff resistance.  The team managed by Miroslav Djukic, with first division survival already guaranteed, is coming to the Camp Nou with the aim of being only the second club capable of taking points on the home ground of the newly crowned league champions.  They’ll have to try it without two of their first team regulars: Serbian right back Rukavina (suspended) and German winger Ebert (flu).