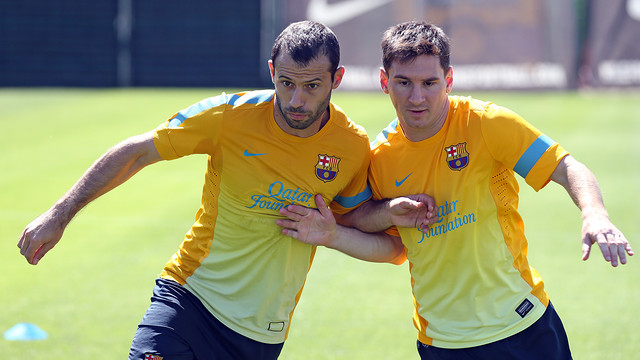 Pedro, who missed the win against Betis due to gastroenteritis, was also back with the main group while Valdés exercised separately.

Javier Mascherano took another big step forward today in his return to full fitness when he joined his teammates for part of the training session for the first time since picking up his knee ligament injury in the CL match away to Paris Saint-Germain.

The first training session of the week was led by Jordi Roura, as Tito Vilanova is in New York until Thursday for medical tests.  As well as Mascherano, the session also included Pedro, who took a full part in the activity after missing the Betis game due to a stomach bug.

Valdés exercises on the pitch

Meanwhile, Víctor Valdés worked out separately from the rest of the squad.  The Barça first choice keeper also missed the Betis game due to a foot injury.  Two other players, Abidal and Puyol, continued with their individual programmes.