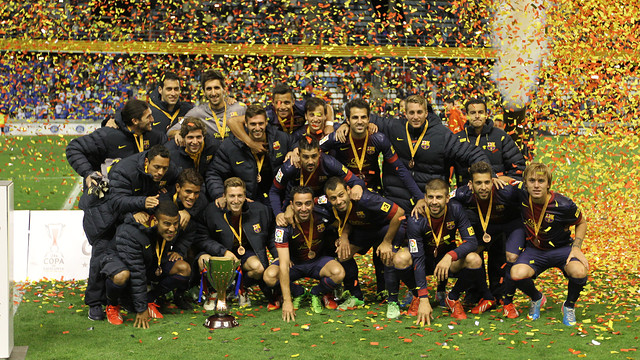 Barça managed to equalise in the final minutes of the match, and later claimed the title on penalties

FC Barcelona were well represented this Wednesday in the final of the Copa Catalunya. Sandro Rosell led the Barça delegation, and he was accompanied by vice-president Jordi Cardoner and the directors Jordi Moix and Jordi Mestre. At 19.00, Cardoner, Moix and Pau Vilanova, chief director of the Social Commission, attended the commemorative service for Juanjo Garra, the Catalan alpinist who recently passed away in the Himalayas.

FC Barcelona were awarded for their tenacity and determination this evening in the final of the Copa Catalunya. Tito Vilanova’s men found it difficult to score on a very on form Kiko Castilla throughout most of the match, but nearly at the end of regulation time Cesc brought the Blaugrana level after Simao’s first-half goal. In the subsequent penalty shootout, Barça outscored their Catalan adversaries by 4 to 2.

The Catalan national anthem, “Els Segadors,” rang out in the packed-out Campo de Deportes of Lleida just before the crowd and the players held a moment of silence for the alpinist Juanjo Garra. Vilanova decided to send out a starting line-up made up of first team players – Adriano, Sergio, Pedro and Dos Santos – and Barça B players. Javier Aguirre, on the other hand, started with 10 first team players and one reservist.

After the first couple of minutes, Wakaso won back possession in the middle of the pitch and found Cristian Gómez, who perfectly assisted Simao. The Portuguese player fired away to score the first goal of the night. Barça reacted and quickly took control of the match. Rafinha and Deulofeu, on two occasions, tried to beat Casilla but their attempts were saved. Sergio Roberto had the best chance for the Blaugrana in the first half, but it was also saved by the in-form keeper.

Vilanova subbed in four new players at the break  – Mascherano, Song, Espinosa and Alexis – and Aguirre made three substitutions – Petrov, Stuani and Colotto. The second half started with Deulofeu leading Barça’s attack, but his attempts, in addition to Alexis’, were saved by Casilla.

Insistence and determination pay off for Barça

Barça continued to press their rivals and they were rewarded when Cesc managed to fire past Casilla after a great assist from Song on the 87th minute. The Cameroonian was then ejected from the game along with Stuani, both of whom were involved in a tussle right before the referee blew the final whistle.

The 24th edition of the Copa Catalunya was decided by a penalty shootout. Fàbregas, Piqué, Alexis and Villa scored from the 11 meter mark making Wakaso and Petrov’s penalties useless. Tito Vilanova’s men finally reconquered a title that the Club hadn’t won since the 2006/07 season.