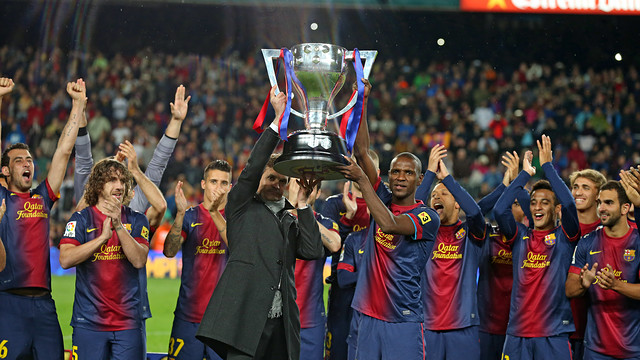 Puyol: “It’s been a difficult year, but the most important thing is that Abidal and Tito are with us”

The rain that soaked pitch during the match between FC Barcelona and Valladolid was quickly forgotten when the league champions trotted out onto the pitch after the match. It was time to celebrate the well earned title after a season marked by many difficulties. “It’s a real joy and pleasure to offer you this Liga. It’s been away from Barcelona for a year, but now it’s here once again,” declared Tito Vilanova in his address to the fans.

“I want to thank you for your confidence and for the help you’ve given to us throughout the season, through the good moments and the not so good moments. Without you this would have been much more difficult. I also want to thank my technical staff, who have done a fantastic job.” Lastly, he thanked his players: “Help them and encourage them, they will make you enjoy [football]. Visca el Barça and visca Catalunya.”

Abidal and Tito lift the trophy

Before Vilanova picked up the mic, it was Carles Puyol who addressed the Camp Nou faithful: “we want to thank you for the support you’ve shown us. It’s been a difficult year, but we won La Liga. The most important thing is that Abidal and Tito are here with us. Let’s celebrate this well earned title. We want more next season!”

The captain, who was handed the trophy by Ángel María Villar, president of the RFEF, gave the trophy to Abidal and Vilanova so that they could lift the cup for the first time in front of the fans. A gesture, similar to the one in Wembley in 2011, that won’t be forgotten.

The celebrations got underway in earnest after Vilanova and Puyol had thanked the fans for their support. Videos highlighting the best moments of the season were shown on the stadium’s video screens, and were followed by fireworks which lit up the dimmed Camp Nou. In addition to the videos and fireworks, the children of the players took a major role in this evening’s festivities. They joined their fathers on the pitch as the team took their lap of honour. The traditional ‘corro’ in the middle of the pitch around the Club’s 22nd La Liga title capped off Barça’s historic night.