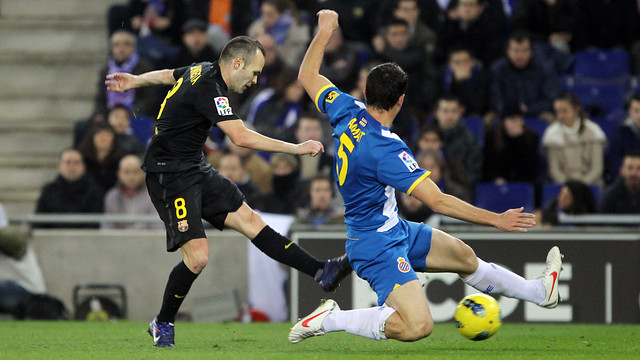 This Sunday, FC Barcelona will play at Cornellà-El Prat for the forth time since the stadium opened in 2009. Currently, Barça’s record away to Espanyol is one victory (1-5, 2010/12 season) and two draws (0-0 in 2009/10 and 1-1 in 2011/12). Historically, the matches away to Espnayol have always been intense and complicated for the Blaugrana.

The blue and whites, who still have an outside shot at qualifying to European play next season, have completed a fairly irregular season. They’ve been unable to win in their last five home matches, however, one of them was the 1-1 against Real Madrid. That result secured the La Liga title for FC Barcelona.

Nearly unbeatable at home since the start of the new year

Before these five matches – four draws and one defeat – Espanyol managed to win five straight games at home. Betis (1-0), Levante (3-2), Mallorca (3-2), Celta (1-0) and Deportivo (2-0) all visited Cornellà El-Prat and none of them were able to take the points home.