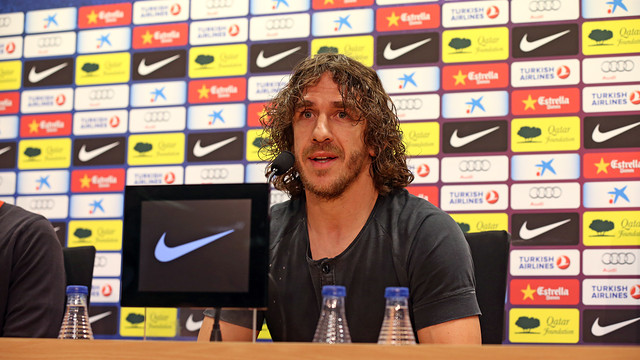 Captain Carles Puyol explains that he’s working to “be fit for the preseason, and if I’m at 100%, even better”

“I have three years left on my contract and I’d like to play when I’m 40, I’ll fight for it,” says Puyol

The captain admitted that Thursday “was a difficult day, emotional, because a great team-mate is leaving. He’s the example we should follow, he’s a friend and Culé for life.” Puyol also talked about Víctor Valdés, who he praised as “the world’s best goalkeeper.” He added: “he’s a friend, you can trust him because he’s always honest. The best news is that he will be here next season. We’ll have the best goalkeeper in the world for another year.”

[[DES_1]]Carles Puyol held a press conference this Friday afternoon to talk about the knee injury that’s keep him away from the pitch for two and half months. The captain revealed that he could hardly walk in the first weeks after his surgery, but as time passed he started to recover. Puyol is determined to continue with his recovery process so that he can be fully fit for Barça’s preseason. “The idea is to keep on working. I have a plan prepared so that I can by at 100% for the preseason,” he noted.

Puyol was clear that he’s ready to fight to keep on playing football as long as possible. “My future is at Barça. I have three years remaining on my contract and I want to play competitively until I’m 40, I’m going to fight for it,” he said. He then went on to rubbish claims that he was interested in moving to another club: “I’ve only been focused on Barça. I would like to retire here.” [[CITA_1]]

The FC Barcelona centre back then talked about his injury, which forced him to have surgery on March 15. He admitted that he first noticed the problem with his knee during the preseason match against PSG. Since then the pain persisted and his knee injury made it impossible to train or play properly. Puyol decided to undergo surgery in the hopes he’d fully fit by the conclusion on the season. But the captain explained that the injury was more complicated than the doctors had thought, which in turn forced the player “to follow a more conservative recovery process.”

Puyol thanked President Sandro Rosell, who honoured the verbal agreement to renew the player for three additional seasons even though Puyol wasn’t at 100%. The captain explained that he phoned Rosell to inform him of his intention to not renew his contract because he “thought it was the fairest outcome for the team and the institution.” But the president talked him out of that course of action and Puyol eventually signed his new contract. The player thanked the president for his “confidence” and he made it clear that he has no intention to see out his contract if he’s not fit enough to play.

“My future is at Barça. I have three years remaining on my contract and I want to play competitively until I’m 40, I’m going to fight for it”