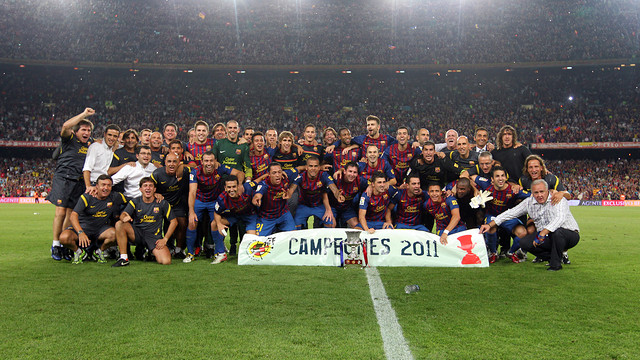 Barça have won the trophy more times than any other team – 10 in all – and Leo Messi is the competition’s all time leading scorer with 10 goals – so far!

Leo Messi is also a record holder in the competition – his 10 goals in nine games making him the leading goal scorer in the Super Cup’s history.

As this year’s league champions, Barça will be taking part in next season’s curtain raiser – the Spanish Super Cup – against the winner of Friday’s Spanish Cup Final. It’s the fifth year on the trot that the team have made it through to the game, equalling the record of the 1990-1994 Barça side.

The game will see Barça face either Atletico or Real Madrid and give them the chance to win their fourth Spanish Super Cup in five years, having beaten Athletic Bilbao in 2009, Seville in 2010 and Real Madrid in 2011. Last year saw Real Madrid beat them to take their total of titles to nine, one behind leaders Barça with ten.