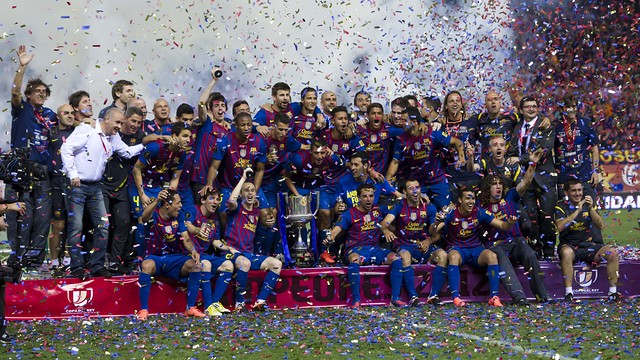 This Sunday, Barça will be back at the stadium where they were crowned Spanish Cup Winners in the final game of last season.

Pedro (2) and Messi were the scorers as Barça swept to a 3-0 victory over Athletic Bilbao.

Barça will be back at the Vicente Calderon on Sunday – a ground that holds plenty of happy memories for the team, who were crowned Spanish Cup Winners there last season. That was the last title that Pep Guardiola won as coach with the team – the 14th out of a possible 19 in his three years at the helm. May 25th 2012 was a happy night indeed for Barça fans.

It was a happy night and one without too many worries, as the team put three goals past the Bilbao keeper within the first 24 minutes, with Pedro scoring twice and Messi adding the other to leave the Basques shell shocked and unable to ever really threaten Guardiola’s side.

The players celebrated their fourth title of the season following the two Super Cups and the FIFA Club World Cup and the end of an emotional campaign.

352 days later the players could be repeating those scenes of celebration, if they can beat Atletico Madrid and Real Madrid fail to win against Espanyol. Simeone’s side confirmed third spot with their 1-3 win against Celta on Wednesday night and they are likely to be turning their attention to the Spanish Cup Final at the Santiago Bernabeu next Friday.