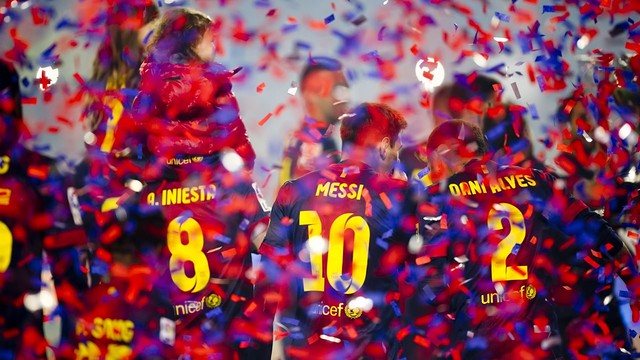 Leo Messi opens up about the difficulties Barça had to endure this season, while Andrés Iniesta launches his Google+ page with a little help from former AC Milan player, Alexandre Pato

Leo Messi sat down with Televisión Azteca’s Inés Sainz last week to give his take on FC Barcelona’s 2012/13 season. “I was very happy to win La Liga,” starts Messi, “the Spanish league is a very important competition because of the rivals we had to go up against, like Real Madrid; they are one of the best teams in the world.”

Even though Barça took control of table from the first week of the competition, Messi says that the road that led the team to the title wasn’t an easy one to travel. “The truth is that this hasn’t been easy because we came into this season after a big change,” says the Argentinian in reference to Guardiola’s departure. He adds: “Things went well with Tito [Vilanova], because he practically didn’t change anything. But we noticed a change when he left, not because Roura or the training staff who stayed on didn’t do a good job but because we were missing our head manager … It wasn’t the same. One year is a long time and it’s great that we can finish it by celebrating.”

The tough Champions League campaign, in addition to Éric Abidal and Tito Vilanova’s absence for large swaths of the year, certainly added to the burden the players had to carry throughout an otherwise successful season. “You can’t always win,” says Messi in reference to Barça’s elimination from the Champions League at the hands of Bayern Munich. “We’ve been playing our brand of football for years and managers and teams have studied it. But we can’t lose our heads after what happened this season. We can’t change Barcelona’s style of play because that’s what has defined the team for years. We have to stay calm and focus on next year.”

When asked about his future plans, the Argentinian superstar declared, “I’m only focused on staying at Barcelona until the end. I’d like to play in Argentina one day, but I won’t play for another European team.”

Read Televisión Azteca’s interview with Messi in its entirety here.

Andrés Iniesta unveiled his Google+ page this afternoon ahead of the FIFA Confederations Cup, which is set to kick off later this summer. The midfielder’s foray into Google’s social network platform started with a ‘Hangout’ with and Alexandre Pato, who plays for Brazil’s Corinthians, and Google+ users. You can watch the Google+ Hangout below: