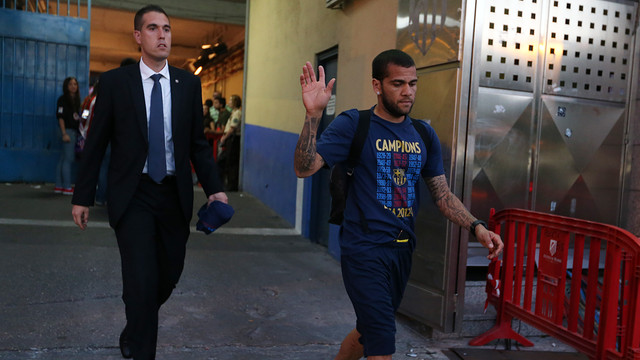 The defender recalls Vilanova and Abidal’s emotional return to the team, and he states that “this title is for them”

Barça’s Brazilian right back, Dani Alves, who was subbed off against Atlético due to injury, is very pleased with his team’s victory at the Vicente Calderón this evening. Alves has always advocated that winning the league title is something to be celebrated, and now that he’s won it, he reiterated that belief to the press. “I’m very pleased, winning this title has been a long process but we’ve done it, now we have to celebrate it with the importance it deserves.” He added: “if it were so easy to win La Liga, we wouldn’t have lost it last season.”

More than a league title

The defender then said that this title is more than just an athletic achievement seeing that this season has been very difficult for the team: “I remember when Abidal and Tito returned [to the team]. It’s been a special year because we’ve won something more important than just a cup, we’ve won the battle for Abi and Tito’s lives. This league is for them, for everything they’ve had to suffer.”

Lastly, when asked about the possibility of breaking the record for points won in a season, the Brazilian said, “the first objective was to win the title, now we’ll try to break the record.”

After the match against Atlético Madrid the FC Barcelona players talked to the press about the team’s title winning bid this season.

“It was an evenly matched game, there weren’t big chances for either side, but in the end we turned the game around and we won all three points. The most important thing is that we’re league champions.”

“Winning the league like this is different, but we’re very happy, now it’s time to enjoy it with out fans and our families.”

“We’re not focused on breaking the record for points won in a season, we approach each match with the same eagerness to win, but it’s not our objective; we only want to be champions.”

“We’ve had an exceptional league campaign; 10 out of 10. The season, which was nearly perfect for us, saw us get very close to the Cup and Champions League finals. The team put in a brutal effort to get there [the finals].”

“I’m eager to celebrate this title. It’s been a difficult year, and now we have to celebrate. We’re the best team in La Liga.”

“Last night some of us gathered to celebrate. We have to celebrate, we need to enjoy this.”

“We’ve experienced a lot of special moments this season. For example, Abidal and Tito … those moments [when they returned to the team] were touching.”

“I dedicated my goal to my mother, it’s Monther’s Day in Chile today, and it’s her birthday on the 14th.”

“I finished strong. The most important thing is how things end, not how they start. Now our objective is to win the games we have left this season.”

“I’m very pleased we won the title, I’m very proud, it’s a dream for me … it’s very special. It’s the most important title I’ve won on the club level.”

“We would have suffered if we had given Madrid a chance to win the title, but whenever they got close, we won.”

“I’ve participated a lot in La Liga and that pleases me, I’ve played a lot of matches. I have to improve, I need to be self-critical once the season ends, but I’m young and I can do it.”