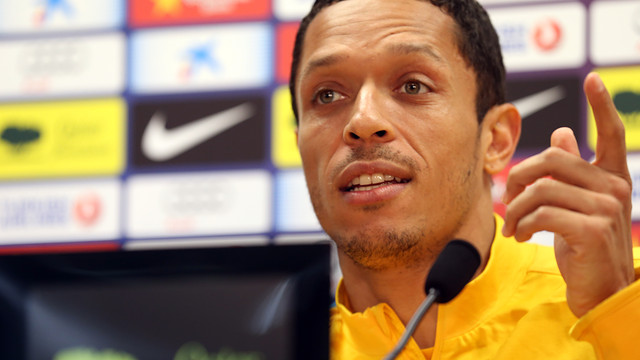 The Brazilian admits that Bayern were the far superior side in the UCL semi-final, but insists that it’s time to turn the page and focus on finishing off the Liga season

Adriano has said that as the days go by, the players have come to accept the circumstances of their heavy defeat at the hands of Bayern Munich in the Champions League. “We’re feeling much better now” he says. “The way the semi-final went was a big blow to all of us. But we were more cheerful in training today and have managed to turn our minds back to Betis, a game that’s like a final for us … Everything seems black now, but the season isn’t over. We still have to finish off the league”. He added that “people have been saying that the league doesn’t matter, but it’s been a tough competition against some difficult opponents”.

We were more cheerful in training today and have managed to turn our minds back to Betis, a game that’s like a final for us

The player was asked to describe the game with Bayern, and answered that “we were looking forward to the chance to get to Wembley, but Bayern were physically better and had very clear ideas about what they had to do.” He added that it had been one of the most difficult matches he had played since he came to the club.

Adriano continued by saying that although he was obviously aware of the enormity of the task, “we believed we could turn the game around because there were still 90 minutes to play”. Nevertheless, he insisted that the result “wasn’t a disappointment. There are a lot of things we can take out of that match and we now know what mistakes we should avoid making in the future.”

Adriano also announced that he and the club are currently speaking about the possible renewal of his contract. “It is my wish to stay here” he said. “We are very close to an agreement and I hope we’ll be able to reach a final decision over the next few days”.

He ended with a few words about Leo Messi. “He’s in a cheerful mood” said the full back. “He couldn’t play against Bayern and that was sad, but he’s feeling very motivated and hoping to get back to full fitness as quickly as possible”.