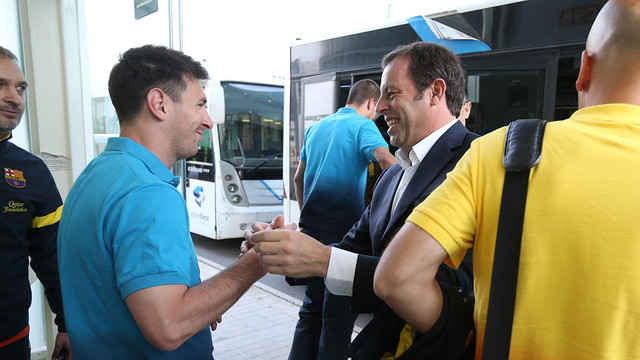 With the league title in the bag, the players were in an upbeat mood as they flew to Madrid to face Atletico

The Barça players came together this morning just hours after Real Madrid’s draw against Espanyol handed Barça the league title on Saturday evening.  The squad is flying to Madrid to take on Atlético in the Calderón (kick-off 7 pm).  The mood at the airport was understandably upbeat.

Congratulations from the president

The Club president Sandro Rosell together with vice-president Josep Maria Bartomeu and director of football Andoni Zubizarreta congratulated the players on their success before joining them on the plane.

The Barça party is due to land in Madrid just before noon and will go straight to their hotel.