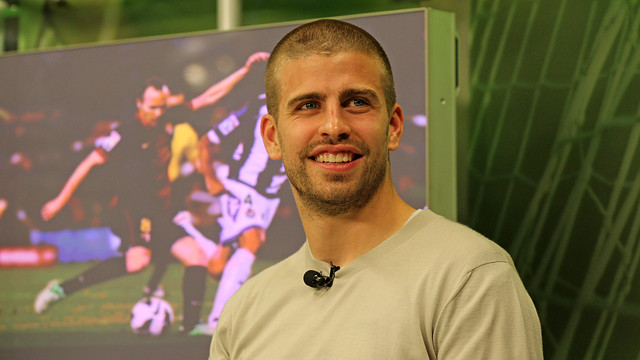 The Barça defender admits, “We’ve got used to the good times but winning a league is never easy”

According to Piqué: “This team’s got a lot more in it. We have to try and keep on winning and taking more trophies”

Gerard Piqué has taken a look back over the season for Barça TV. The defender was interviewed for ‘El Marcador’ following the win against Valladolid and the celebration of the league title with the fans. “The fans were looking forward to enjoying the league with us and once again they proved it by coming on a difficult day”. Piqué spoke about the moment Carles Puyol handed the trophy to Tito Vilanova and Éric Abidal. “It was a great gesture by Puyol. The captain always makes good and appropriate gestures. They both deserve it. But now we have to move on and focus on the future with enthusiasm and hope”.

Although the objective of winning the league has been achieved, the team still has challenge of reaching 100 points. “We’re attracted by it because in every match we have to go out to win, above all for the honour of the Club we represent. If we can get there, all the better. For us it’s a challenge. If we can reach 100 points, and beat the Club record (99), all the better”.

The next hurdle in the race to 100 points is the match against Espanyol in the Cornellà-El Prat stadium. “It’s always special to go there because of the rivalry between the two teams and because of the stadium, where there’s always a great atmosphere”.

But whatever happens, the team won’t be changing the way they play. “The Barça style isn’t negotiable but we have to progress. Sometimes we play with Leo as a false striker with wingers. We have to change things around because our opponents get to know us and that mustn’t happen”.

Winning titles is very difficult and we’ve got used to the good times but winning a league is never easy
Reaching 100 points attracts us, above all for the honour of the Club we represent