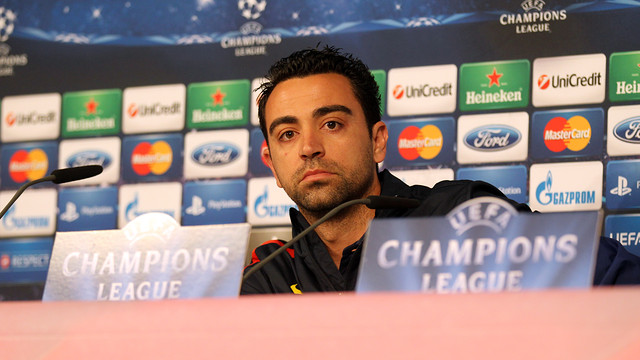 The Blaugrana believes that “retaining possession is the key against Bayern”

Xavi Hernández talked to the press ahead of tomorrow’s Champions League semi-final between Bayern Munich and FC Barcelona. During the press conference, the Barça vice-captain said that “retaining possession will be key, not having the ball would be the worst possible scenario. We need to control the ball for long periods of time and take control of the game. We know that Bayern are in form, but we’ll try to impose our style of play. The team that imposes its personality will win the tie.”

“We’re not going into the match as victims”

Knowing full well that the German side are favoured by many to make it to the final, Xavi declared “we aren’t going into the match as victims. Both teams have the same chances of going through. They are an amazing team, but Barça are Barça, we’ve been on top for a long time in Spain and Europe.” He added: “we understand and respect what has been said [in terms of which team is favoured] but we don’t share the sentiment, we’ve qualified for six consecutive Champions League semi-finals … this is where we wanted to be when the season started. We’re very happy to be here and we’re very eager to play.”

Xavi then went on to describe Bayern Munich: “they are a very complete team, strong physically and technically. They are perhaps the most on form team in Europe at the moment.” This, however, motivates the Catalan and he expects tomorrow’s match to be extremely challenging: “the tie will be very difficult because of how they’ve been playing all season.”

When asked what he thinks Barça need to do in order to reach the final, Xavi said, “it’s very important to score away from home. We have to attack. The match against Milan is our reference point. We’re in the semi-finals of the Champions League and that motivates us.”

“We’ll see the best Messi on the pitch”

One of the big questions ahead of tomorrow’s match is whether or not Messi will be able to play. “For us, having the best player in the world is fundamental,” said Xavi. “He always makes a difference. He’s very eager to play, and I’m sure we’ll see the best version of Messi on the pitch.”

“Bayern are an amazing team, but Barça are Barça, we’ve been on top for a long time in Spain and Europe”