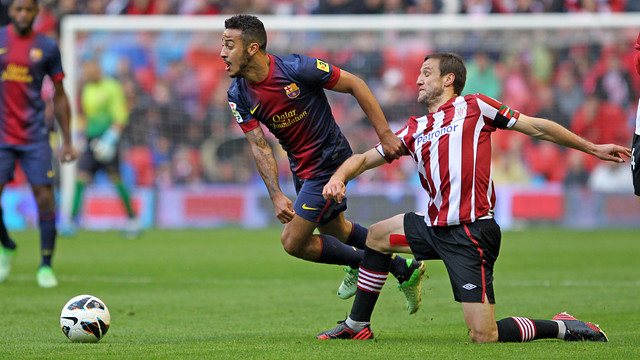 Once again Thiago Alcántara was named to the starting line-up, this time against Athletic Club. The match had two distinct periods – before and after Messi came onto the pitch – but the midfielder was singled out for praise by Roura after the game. Despite leading throughout most of the second half, the Blaugrana watched as Athletic Club scored the equaliser in the final seconds of the match. “Athletic Club are a team that always try to win, and they didn’t give up until the end,” said Thiago.

The team, in good condition

The eldest Alcántara brother continued, “we’re in good condition and we have a team that always want to win, but anything can happen in football.” This Saturday’s match was Barça’s last at the San Mamés seeing that the legendary stadium will be demolished at the conclusion of the current season. “San Mamés is an historic stadium and we’ve always really enjoyed playing here, but I’m sure the new stadium will be great as well.”

Lastly, the midfielder talked about the return leg of the Champions League semi-final against Bayern Munich. Despite the bad result from the away leg and the obvious quality of Bayern, Thiago noted that “I think we will make a comeback.”

Alexis unhappy with the draw

Alexis Sánchez scored the go-ahead goal at the San Mamés, which was his fifth in the competition so far this year. Despite his goal, the final two-all draw leaves “a bad taste in our mouths, but we’re not worried about it because of the hard work we put in against Athletic.” He added: “We know what it means to have Messi on the pitch, it doesn’t surprise us, when he comes in, he changes the game.” Lastly, the Chilean talked about the Champions League showdown with Bayern: “We need to fight back, but we also know that it will be very difficult.”