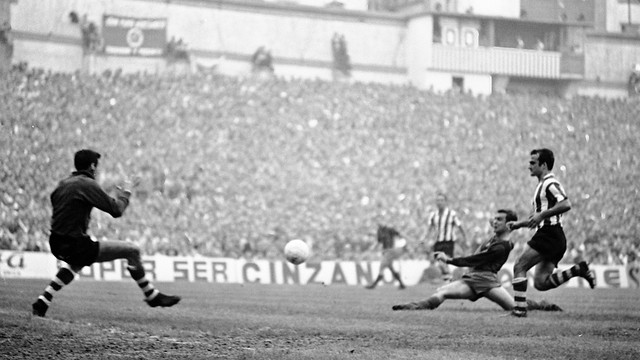 The legendary stadium San Mamés, inaugurated on August 21 of 1913, will be torn down this summer to make way for Athletic Club’s new stadium. This Saturday Athletic and Barça will play for one last time at La Catedral and thus the storied history between the two sides at the San Mamés will come to an end. Here’s a look back at the most memorable matches played in the famed stadium between Basques and Catalans:

The first Athletic-Barça at San Mamés

The first game Barça played at San Mamés was on January 31 of 1915. The two teams finished in a one-all draw, with goals from the legendary Rafael Moreno ‘Pichichi’ (the top scorer in La Liga wins the trophy that bears his name) for the home team and Mallorquí for the visitors.

On February 21 of 1928 Barça defeated Athletic Club at San Mamés for the first time in Club history thanks to a solitary goal from the Catalan Josep Sastre. Curiously, a sports daily in Bilbao declared that Sastra was Basque, “because of how he plays football, his way of being and his scope for the game.”

On February 8 of 1931 Athletic Club thrashed a Barça side that featured players like Zabalo, Martí, Castillo, Piera, Sastre, Goiburu, Arnau, and Parera by 12 to 1. In fact, Barça had defeated the Basque side earlier in the season by 6 to 3, but they missed out on the title by a single point; the champions were Athletic Club that year. Anyhow, the Barça players, who were angered with how the Club was being handled by the administration, purposefully played poorly against their Basque rivals.

The semi-final of the 1950/51 Cup between Barça and Athletic was certainly an electric affair. Barça hadn’t won at the San Mamés for 16 seasons, since the 3-5 in 1931. However, on May 20 of 1951 Kubala’s Barça won by 1 to 2 despite the incredible amount of pressure heaped on the Blaugrana. The match was so intense that at its conclusion Barça Club administrators hurried to the dressing room with bottles of cognac to calm the nerves of their frazzled players.

The famed Barça of the Five Cups put an end to the team’s bad luck at San Mamés. Since the first edition of La Liga (1928/29), the Blaugrana had played a total of 20 matches at San Mamés with a record of 2 victories and 18 defeats, and 36 goals scored and 81 conceded. On January 6 of 1952, the Blaugrana vanquished the Basques by 0-3 thanks to goals from Basora (2) and Vila and a phenomenal performance from Ramallets. It was Barça’s first ever clean sheet at Athletic’s stadium. Curiously, Kubala, who was injured, didn’t play that game.

On May 29 of 1955 the Basque defender Canito picked up an injury on 25 minutes in the Cup match against Barça at San Mamés. 25 minutes later, Canito, who was positioned on the left wing of Athletic’s attack, scored what has come to be known as the ‘cripple’s’ goal when he latched onto a loose ball in the Barça area and beat Ramallets despite barely being able to walk.

José Ángel Iríbar was Athletic Club’s keeper from 1963 through 1980. At San Mamés, the ‘Txopo’ [The Mole] could simply not be beaten by Barça’s forwards. It wasn’t until the 50th minute of the match played on January 18 of 1970 that Barça managed to get one past the legendary keeper. It was Lluís Pujol who headed the ball in from a corner kick taken by Carles Rexach. Before Pujol’s goal, Iríbar had kept Barça off the board for 590 minutes – which translates to 6 games; five in La Liga and one in the Cup.

The relationship between FC Barcelona and Athletic Club was excellent during Spain’s transition to democracy. In the 1976/77 season both teams faced off in the quarter-finals of the UEFA Cup. In the away leg, played at San Mamés on March 2 of 1977, the Basque fans applauded and sang the names of the Blaugrana players when they trotted out onto the pitch. At the Camp Nou, during the league game that had been played days prior, the Catalan fans did the same for the Athletic players. However, during the 1980s the relationship deteriorated and the subsequent encounters between the two sides were rather unpleasant.

Hristo Stoichkov put in a glorious performance – which included four goals – against Athletic Club on March 10 of 1991 when Barça defeated Athletic Club by 0 to 6 at San Mamés. The Bulgarian master’s third goal should be included in text books on how to execute the perfect counterattack: Zubizarreta snagged a corner kick and quickly found Goikoetxea, who ceded the ball to Stoickhov. The Bulgarian made for Athletic’s goal like a bullet shot from a rifle as he blew past Andrinúa and Lakabeg and beat Iru with a low shot to the near post.

On June 18 of 1995, Athletic Club and Barça played at San Mamés in the closing match of the 1994/95 La Liga season. On 77 minutes, Jordi Cruyff received the ball in his own half, danced around Larrazábal and dribbled his way all the way to Valencia’s goal, who he beat with a phenomenal strike.