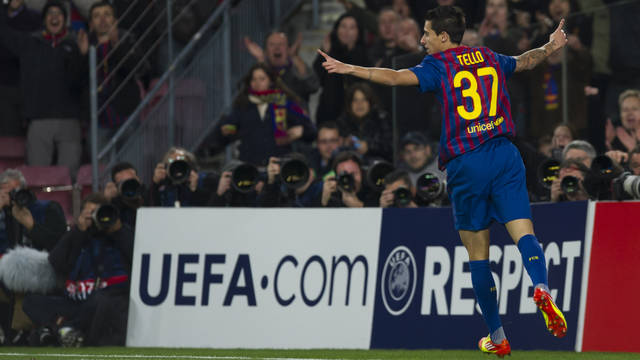 The scorer of a brace against Bayer 04 Leverkusen has scored a goal every 66 minutes he has played, an even better average than that of Leo Messi

He has only ever started two first team matches, but has taken his chances extraordinarily well, with six goals already to his name
Cristian Tello is proving to be the perfect super-sub. The Barça B player has scored six times in the 366 minutes he has been with the first team in the Liga, Copa del Rey and Champions League. His finest showing yet came against Bayer 04 Leverkusen, where he was on target twice on his European debut, and that despite only being on the pitch for 40 minutes.

Fast and decisive, and always playing on the left, Tello has an average of a goal every 66 minutes. Not even Messi, who has scored once every 93 minutes, can boast stats like that, although the Argentinian has played considerably more minutes, 3,291 this term.

Most of Tello’s goals have been scored as a substitute. He has only every been in the first XI twice, against l’Hospitalet in the cup (0-1) and Real Sociedad in the league (2-1), both times playing the full 90 minutes, and both times scoring Barça’s first of the night.

Tello has scored his other five goals as a substitute. He managed braces against both l’Hospitalet (9-0) and Bayer 04 Leverkusen (7-1), while he also netted what was ultimately only a consolation goal at Osasuna.