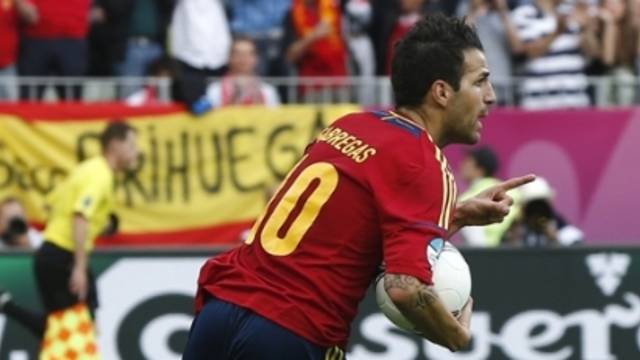 Cesc played the full game and scored the second Spain goal, after Cazorla had got the first. Cintrón pulled one back for Puerto Rico

Vicente del Bosque used three FC Barcelona players (Cesc, Piqué and Iniesta) in his starting eleven against Puerto Rico in San Juan, which ended in a 2-1 win for the visitors thanks to goals from Cazorla and Cesc Fàbregas. There was also time for Sergio Busquets to appear as a substitute, while Cesc was the only Barça player to see out the full ninety minutes.

The first major scoring opportunity fell to Gerard Piqué with an early header onto the post. But despite their dominance, it took the World and double European champions 43 minutes to open the scoring thanks to a Cazorla shot from distance. Moments after, Cesc Fàbregas latched onto a Navas cross from the right to make it 2-0.

Sergio Busquets came on after the break, while Sergio Ramos replaced Piqué. In the 64th minute, Marc Cintrón gave the home crowd something to enjoy by pulling a goal back for Puerto Rico. Torres could have made it three with just four minutes left on the clock, but was denied by an astonishing Gaudette save, and things ended with a Spain win by the odd goal in three. 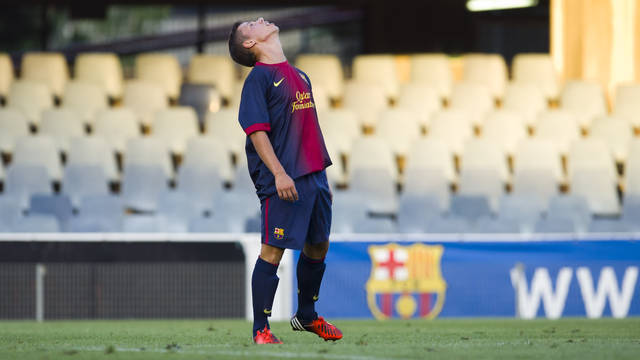 An equaliser 10 minutes from time by Toni Sanabria gave Barça’s Youth A team a draw in their opening NextGen series game against Anderlecht tonight.

Despite enjoying the lion’s share of the game’s chances, Jordi Vinyal’s Youth A team had to come from behind at the Mini Esatdi against Anderlecht tonight and they needed a late equaliser from Toni Sanabria to take a point from their opening Next Gen series match.

Domination, but no goals

Anderlecht had the first chance after just three minutes when Bruno caught Ondoa out with a shot from outside the box which hit the woodwork, but as the game settled down, it was the hosts who began to dominate and create the better opportunities. Barça’s first chance came on 11 minutes Nando Quesada rounded off a nice move with a shot that just went over and 10 minutes later, Sandro came close as he turned and shot from an Adama cross. Soon after, Ebwelle forced a good save from the Belgian keeper from a Lucas centre, as Barça upped the pace in search of an opener. Anderlecht had few chances themselves in the first half, but when they did get the ball forward, they certainly looked dangerous.

Sandro again came close after the break with a shot from the edge of the box and Adama Traoré, one of the most threatening Barça players on the night, was troubling the Anderlecht defence down the wing, but despite their domination, the hosts seemed to tire and on 66 minutes, Kabasele took advantage, finishing off a counter attack led by De Bruyn to give the visitors the lead. Vinyals threw on Toni Sanabira, Babunski and Enguene as he looked for the equaliser, but the team were finding it hard going until Sanabria was set up by Enguene to fire past the Anderlecht keeper. It could have been worse for the youngsters had Ondoa not come to the rescue two minutes from time after the ball was lost in midfield and Bruno broke free. 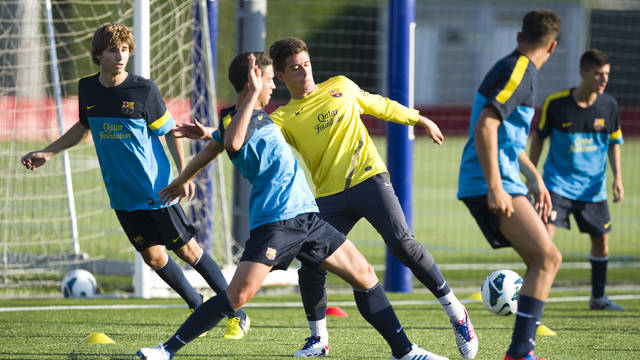 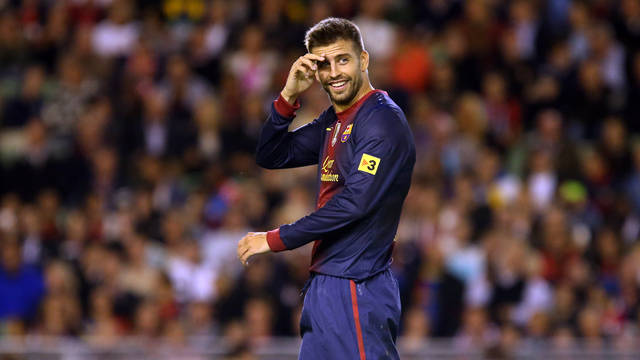 The first team face a hectic opening to the season, with five games in the first fifteen days – three league matches and the two Spanish Super Cup games against Real Madrid

In addition, next Monday’s Joan Gamper Estrella Damm Trophy pits them against Sampdoria

Tito Vilanova begins his first league season in charge on Sunday with the visit of Real Sociedad to the Camp Nou (21.00) and the Basques will be just the first of a series of five tough games in the first 15 days of the campaign, with two more league matches and the two legs of the Spanish Super Cup all scheduled ahead of September’s international break

First title up for grabs

Following the league opener, Barça – the Spanish Cup holders – entertain last season’s league winners Real Madrid in the first Classico of the season – the first leg of the Spanish Super Cup on Thursday at the Camp Nou (22.30). Six days later – August 29th – the return game at the Bernabeu will also kick off at 22.30.

Between those two games, Barça will make their first away trip of the league campaign, when they travel to Pamplona to face Osasuna at 19.00 on Sunday August 26th, whilst the week after they entertain Valencia on Sunday September 2nd at eight in the evening.

As well as the five official games, Barça will also be playing the Joan Gamper Estrella Damm Trophy on Monday August 20th, with the official team presentation taking place at 21.20 and the game against Sampdoria following at 22.00. The gates to the Camp Nou will open at 17.00 for the traditional pre-tournament Festa del Gamper. 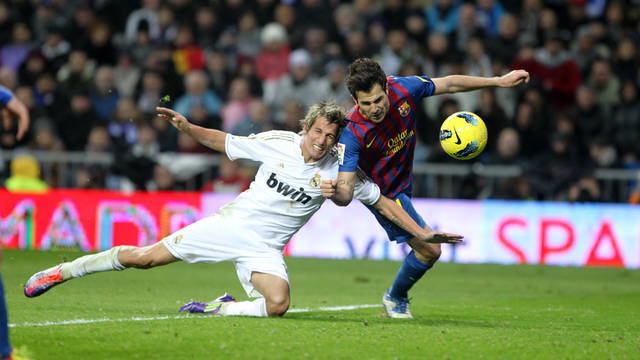 On August 15th 2011, Cesc Fàbregas’ dream of a return to the Camp Nou came true. His desire to sign for Barça had been no secret over the previous summers, but last year the then Arsenal captain, the London club and the Club where he’d learnt his trade as a youngster finally reached a deal to bring him home. Cesc was the Club’s second signing of the summer – after Alexis – and more than 30,000 turned out for his official presentation. Minutes before that presentation, Cesc had described his move as “the biggest challenge of my life”.

Three titles to start with

Handed the number 4 shirt, Cesc made a spectacular start to the season, winning the Spanish and European Super Cups and the Club World Cup in his first four months, scoring his first goal against Madrid in the Spanish Super Cup, then chalking up another in the European Super Cup win over Porto in Monaco. He settled into the team almost immediately and he was the second highest scorer in the first part of the season with key goals such as against Madrid at the Bernabeu (1-3) or against Santos in the final of the Club World Cup (4-0).

Although his goal scoring feats slowed down in the second half of the season, he confirmed his position sitting just behind the front men, or a s a false number nine, able to create chances for the rest of the team., Cesc finished the season with 15 goals in 48 games (scoring in 5 of the 6 competitions he played in) and a Spanish Cup winners medal.

The Spanish Cup wasn’t the last thing that Cesc won though, as he played a key part in Spain’s Euro 2012 victory. Like the rest of the European champions, Cesc joined up with the rest of the squad late, but Tito Vilanova knows what Cesc is capable of from his time working with him in the academy and will be counting on him as he begins his second year back home at Can Barça.