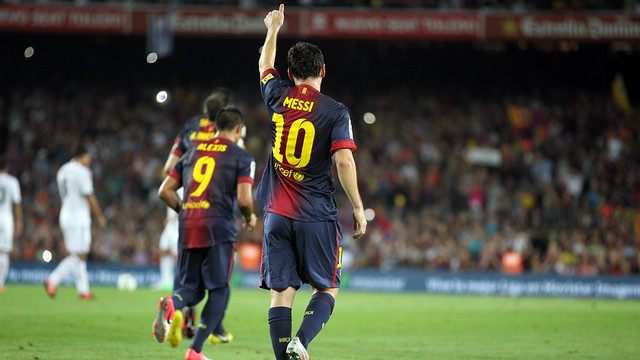 The Argentinean, at 25, is level on goals with the ex-Sevilla player Juan Arza as the 10th all-time scorer in La Liga history

Leo Messi keeps on breaking long-standing records. The Argentinean, with his two goals against Rayo Vallecano this evening, has netted 182 career goals in La Liga, making him the all-time 10th highest scorer in La Liga history. The Barça player is level on goals with Juan Arza, the player that donned the Sevilla strip from 1943 through 1959. Messi is only four goals back from Santillana (186 goals), who played for Madrid for 17 seasons. Zarra (Athletic Club) currently holds the record with 251 goals.

This year, after nine matchdays, he’s netted 13 times. If he continues at this pace, he’ll end the season as La Liga’s sixth or seventh all-time scorer.

Atlético Madrid are the team that Leo Messi has scored the most on throughout his career. Up until now, he’s netted 15 times against Los Colchoneros, three more than he has against Racing Santander (12) and four more than he has against Sevilla and Zaragoza (11). Diego Alves, who’s conceded 11 goals to the Argentinean, is the keeper that has conceded the most goals to Messi, ahead of Iker Casillas (10).

The Argentinean has scored a total of 13 hat-tricks and 2 quadruples – against Valencia and Espanyol, both times last season. Is there a record that Messi cannot break? 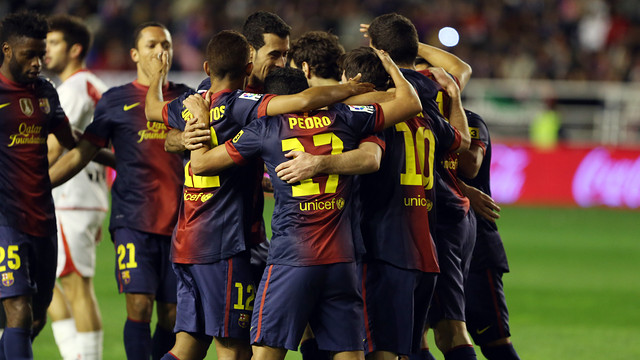 FC Barcelona laid down the law in Vallecas with a 0-5 win thanks to goals from Villa, Messi (2), Xavi and Cesc and stretch their best ever start to a season

Barça’s magnificent start to the season continued with a comprehensive win in Vallecas to make it eight wins and a draw from their first nine games in La Liga. Goals from Villa, Messi (2), Xavi and Cesc saw Barça through after a pretty well balanced start, which really tilted the visitors’ way after the second goal, as Tito’s men took advantage of Rayo’s advanced back line.

Tito had warned that this could be a tough match and the first quarter of an hour seemed to back that up as a combative Rayo challenged Barça for possession and even came close to taking the lead. Barça, with Busquets and Adriano at the heart of defence, were finding it hard to link up in midfield and created very few chances.

Then, on 20 minutes, Cesc and Villa linked up brilliantly and the Asturian fired low past the keeper for his first goal as a starter this season to give Barça the lead. Now they were ahead, Barça took control and began to dominate possession, though there were no more goals before the break.

In the second half, Barça came out determined to put the game to bed and after just two minutes Messi rounded off a brilliant team move which saw Pedro beat two defenders and lay the ball off for Montoya who set up the world number one to fire home for the second.

Xavi, Cesc and Messi finish the game off

Rayo kept trying and Paco Jémez threw on Nicki Bille for full back Casado in a brave move which failed to bear fruit as Barça took full advantage of the spaces behind the advanced Rayo defence, with Xavi, Cesc and Messi all getting goals in an easy end to the game. 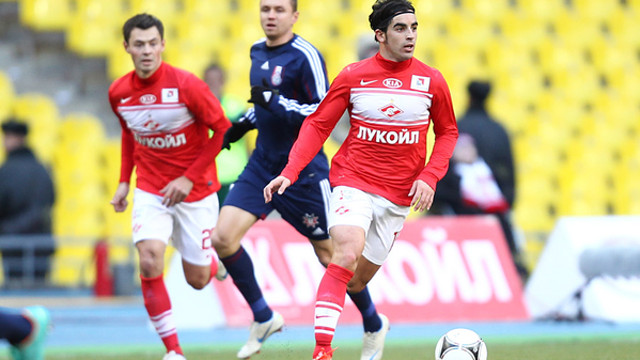 Celtic FC hosted Kilmarnock this Saturday evening at Celtic Park. The home team looked sluggish from their mid-week match against Barça in the Champions League (1-2) as they surprisingly were defeated by the seventh-placed team in the Scottish Premier League (0-2).

Kilmarnock scored the opener in the final minutes of the first half thanks to a goal from Sheridan. In the second half Celtic attempted to fight back but were not rewarded for their efforts. Kilmarnock doubled its lead thanks to a converted penalty by Kelly.

Unai Emery’s Spartak Moscow easily brushed aside M. Saransk by 2-0 this Saturday evening in the Russian capital. Barça’s Champions League rivals have yet to lose any home matches this season.

Spartak Moscow dominated the match from the first minute but were unable to score the opener until right before the break. Jurado, the Spanish midfielder, gave the home team the lead. Nothing changed in the second half as Spartak Moscow maintained its dominance and doubled its lead thanks to a goal from Bilyaletdinov.

Emery’s team will play away to Benfica in the Champions League on November 7th. 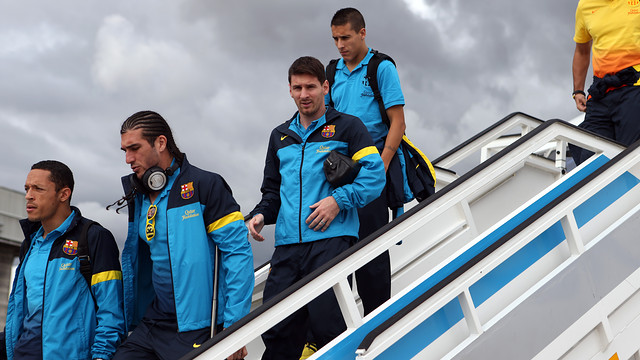 Barça arrived in Madrid this afternoon ahead of this evening’s match against Rayo Vallecano (22.0))

Barça departed from El Prat airport at 11.15 and arrived in Madrid at noon, where the team will face off against Rayo Vallecano this evening at 22.00. Vice-president Jordi Cardoner, accompanied by director Jordi Moix and director of football Andoni Zubizarreta, led the Blaugrana expedition. The directors Joan Bladé and Pilar Guinovart will join the team later on this evening.

Upon arrival, the team went directly to the Hotel Eurostars Madrid Tower. The Rayo-Barça match is scheduled to kick off at 22.00 (GolT and Canal+ Liga). 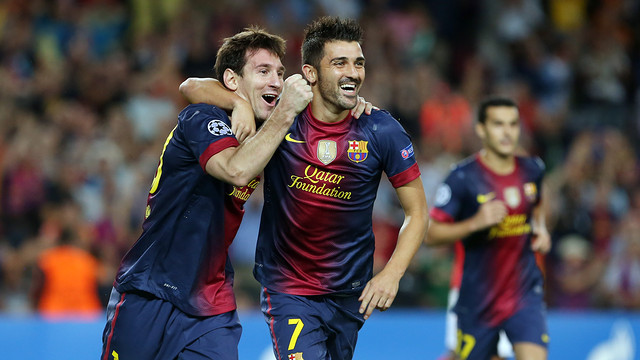 With Barça facing Rayo on Saturday night, the pressure will be on Atletico Madrid to keep up the pressure when they play Osasuna on Sunday evening at the Vicente Calderon

So far this season, Atletico Madrid are the only team able to keep up with the pace Barça are setting at the top of the table and they will no doubt be hoping their near neighbours Rayo Vallecano do them a favour against Tito Villanova’s team on Saturday. On Sunday Simeone’s team entertain bottom club Osasuna and after their midweek Europa League win, they will be looking to extend their impressive 21 game unbeaten run with a win over the Basques.

Malaga could be up to within two points of the top two by kick off time in Vallecas if they see off struggling Espanyol at El Prat –Cornella in the opening game of the weekend. Malaga’s great start to the Champions League was confirmed with a midweek win over Milan and with Espanyol on just five points, Pellegrini’s team, who’ve lost just once on the road so a far this campaign, should start favourites. Real Madrid are fourth in the table and after their defeat in Dortmund on Wednesday, they face another tough trip on Sunday when they visit Mallorca, who have won three of their four home games so far.

If the bottom two face difficult games this weekend, so do Deportivo – just a point ahead of Espanyol on 6 – as they go into the first top flight Galician derby since 2007 when they travel to Balaidos on Saturday. As Celta boss Paco Herrero made clear though, whatever their position in the table: “there are much more than three points at stake here”. Athletic Bilbao are another team in desperate need of points and they will have to lift themselves following Thursday’s defeat in Lyon when they face Getafe at San Mames, whilst their fellow Basques Real Sociedad – who are just a point ahead of Bilbao on 9 – themselves face a tricky visit to Valladolid on Monday night still looking for their first away point of the season.

Valencia back on track

Betis are at home to Valencia, who appear to have got back on track with their wins over Bilbao and BATE, and Pepe Mel will welcome back Spain international Beñat Etxebarrí, whilst Pellegrino looks to build on a good week and win his first league game on the road since taking over . Manolo Jimenez will face his old team Seville in Zaragoza in Sunday’s noon kick off with Michel’s side sitting in fifth, level on points with Madrid, and seemingly over their dip in form with last week’s win over Mallorca.

In the weekend’s other game, Llevant- whose 3-0 win over Dutch league leaders Twente on Thursday made it three wins in a row – are at home to fifth from bottom Granada.