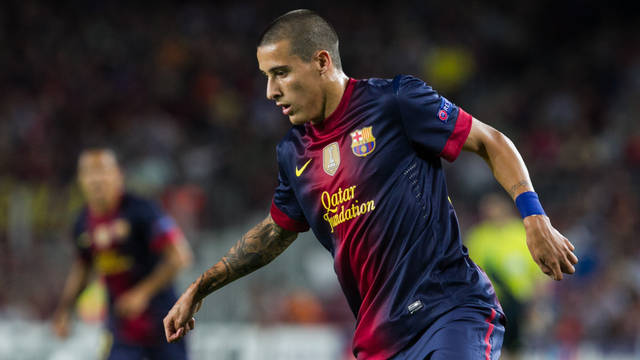 Cristian Tello, one of the standout players in Barça’s victory over Spartak this Wednesday, said that “the first three points of the Champions League are very important”

Xavi Hernández rues the injuries to Gerard Piqué and Carles Puyol, but he said that “the team is big enough to cover their absences”

Training session on Thursday at 11.00

The team will return to training this Thursday morning at 11.00 at the Ciutat Esportiva. Cesc Fàbregas will talk to the press after the session.

Messi and Cesc passed their anti-doping tests after the match against Spartak Moscow.

Cristian Tello put in a brilliant performance this Wednesday evening against Spartak Moscow. The Auzlgrana forward said that “I’m very happy we won and that we got the three points, the first Champions League match is always important. The team went all out and everyone saw it.”

The Barça B player talked about his performance and of the confidence that Tito Vilanova gives him: “I’m very pleased that the boss is confident in my abilities and I’m happy that I played a part in two goals – I scored the first and I assisted the second. I do what the boss tells me to do, he told me to take my chances, I’m lucky that my shot went in.”

Tello also had words for Leo Messi: “He thanked me for the assist, I’m really happy for him. Messi decided the game, like he always does.”

“We won a difficult match, that’s our merit. It’s not easy to fight back when they close themselves off and they defend in their own area.”

“They have very fast forwards and they’re very good on the counter.”

“It’s a shame that Piqué picked up an injury. He’s very important to the team, as is Puyol, but we have more than enough players on the team to cover their absences, and even more in the reserve side.”

“What we want is titles and we’re on the right path. My goals are only important if they help the team.”

“It was a very difficult match against an organised team that can play the ball well when they go forward. Their men up top, Ari and Emenike, are quality players.”

“With the substitutions we opened up the pitch. Alexis was in the middle – in the 9 position – so he had more presence in the area and it all worked out. The fans helped us a lot and they carried us throughout the match.”

“Any team that makes it into the Champions League play at a high level and we know that, we’ve been saying that this group won’t be easy and that we have to take it a game at a time.”

“All of the players that have picked up injuries are important. Puyol and Piqué, without a doubt are very important, but the team is big enough to cope with their absences.”

“We’re focusing on Saturday’s match, before the Clásico there are two more league games and another Champions League fixture.”

“It’s clear that it would be good to get them [Puyol and Piqué] back before the Clásico, but we have a good team. Busquets, Song, who played a good game, Mascherano .. all of them can play in the center back position.”

“They came into the match with the idea of defending and that made it more difficult for us. I believe that we were the only team that tried to win the match. They scored two goals in two isolated plays, but our insistence allowed us to win.”

“It’s complicated to play against teams like this, it’s hard to attack, we almost didn’t need defenders. The most important thing about football is attacking.”

“I’m very sorry for Víctor, that has never happened to me before. I feel terrible because he’s been unlucky in the goals other teams have scored on him.” 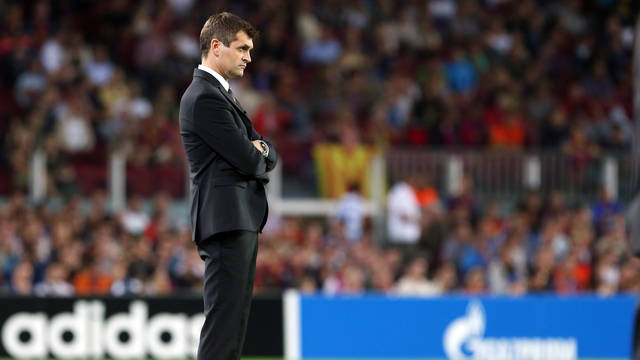 On the match, he said that ““We carried the weight of the game and had the initiative throughout the whole match. We knew that their forwards were fast and that they were dangerous on the counter”

The Spartak Moscow manager congratulated Barça for this evening’s victory and he noted that “Barça are one of the favourites to win the Champions League.” Emery also said that “I have the bacd luck of being one of the managers that has never been able to win in this stadium. But I’m lucky enough to have come to the Camp Nou six times.”

“I would have preferred to have won more easily and suffered less. However, I think these types of games are good for all of us. Football is not easy. The comeback proves that this team is eager to win,” said Tito Vilanova in the Richard Maxenchs press room. The manager praised the ambition his players showed throughout the match: “they proved that they really like playing football. It’s difficult for a team that has won so much to be this hungy for victory.”

“We carried the weight of the game and had the initiative throughout the whole match. We knew that their forwards were fast and that they were dangerous on the counter,” said Vilanova. “When were were behind we changed our style of play and that gave us more options going forward. Of course, that means we were a bit more vulnerable at the back.”

Song as a center back

The Barça manager explained that “I could have sent in Marc Bartra for Piqué but there was a lot of time left on the clock and Marc hasn’t played a full game yet this year. Song, on the other hand, was brought in for this purpose and he has more experience.” The manager added that “Song is a player that brings the ball out well from the back because he’s played in the pivot position many times before.” On Bartra and Fontàs, Vilanova added that “they need to wait for their opportunity to play.”

When asked about the performance put in by Tello, who scored a goal and assisted Messi for the team’s second, Vilanova said that “he’s having a good season. He had a good season last year as well. He finds space on the wing and he’s confident enough to take on his mark. It’s good that he scored a goal tonight because he had a couple of chances last time he played.”

On the Argentine: “Messi is playing well. He’ll have more rhythm as the season goes on. This Wednesday he scored two goals. Not bad at all,” said the smiling manager.

Lastly, when asked about Jordi Alba, he explained that “he played with the Spanish national team whilst on medication [antibiotics] and, seeing that he hasn’t completely recovered, the Club decided that the best course of action was to take him to hospital. His medications have left him a bit weak and he should be good to go by Saturday.” 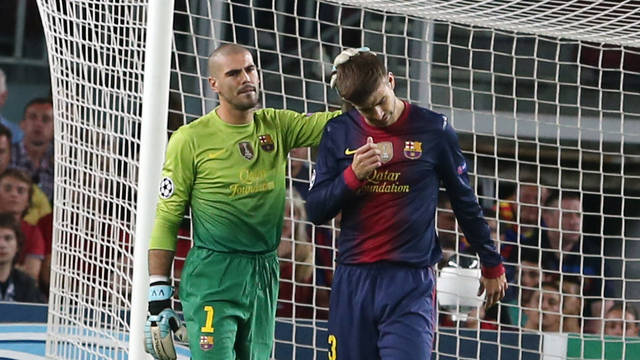 The defender, who picked up his injury on the seventh minute of the match against Spartak, sprained his left foot and will be out of action for at least two weeks

Before tonight’s match, the Catalan defender was the most used player by Tito Vilanova

Gerard Piqué will be sidelined for two to three weeks after picking up an injury shortly after kick off against Spartak Moscow. According to the Club’s Medical Services, the player has spain in his left foot.

Piqué went forward to contest a corner kick on seven minutes and received a knock on his left foot. The center back couldn’t continue on the pitch, even though he tried, and was subbed out two minutes later. The Cameroon international Alex Song filled in for the injured Catalan as center back.

Piqué, the most used player up until tonight

The defender was the most used field player by Tito Vilanova in Barça’s six official matches of the season. Before this evening’s Champions League match, Piqué played a total of 492 minutes between Liga and Super Cup matches.

Piqué joins captain Carles Puyol, who sprained the posterior cruciate ligament of his left leg, on the injury list. The captain will be out of action for four to six weeks. 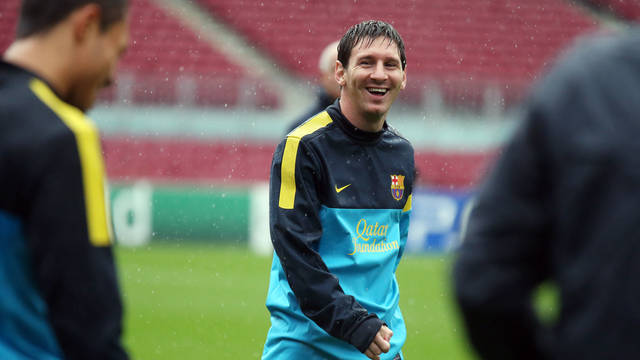 Jordi Alba, who is out of the game as he continues to recover from the flu, trained apart from the rest of the players

Under heavy rain, the players put in their final training session ahead of tonight’s Champions League game against Spartak Moscow. The 19 players called up by Tito Villanova, including Alexis Sanchez who has still to receive the medical ok to play, again trained on the Camp Nou pitch, as they did on Tuesday evening.

Jordi Alba trained apart from the rest of the players as he continues to regain full fitness after the bout of flu that laid him low last week and ruled him out of the Getafe game and tonight’s European clash.

After spending the night together at the Hotel Majestic, the players were brought to the Camp Nou at noon in order to put the finishing touches to preparations for the Spartak game and at 13.30 they will return to their hotel until they return to the stadium for tonight’s 20.45 kick off. 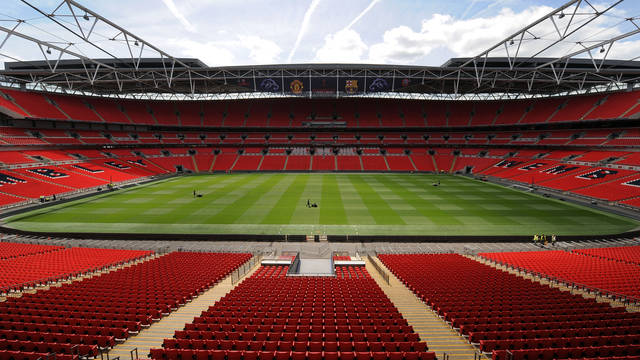 FC Barcelona, leaders of La Liga, will kick off its Champions League campaign this Wednesday with its sights set on the May 25 Wembley final