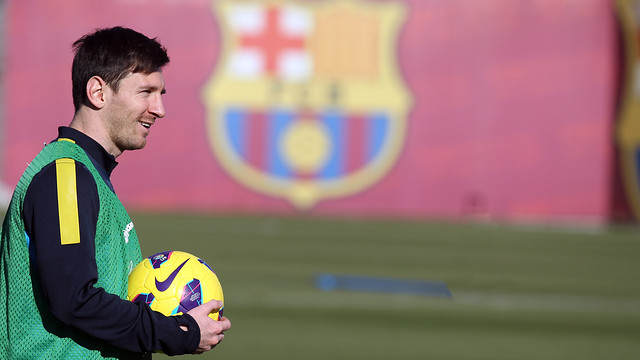 After training on Saturday with the rest of the squad, Leo Messi will be in the team headed for Seville on Sunday to take on Betis in the league (21.00, Canal+)

Messi has been named in Tito Vilanova’s squad that goes to Betis on Sunday after training normally on Saturday morning. The Argentinian has recovered from the knee injury that saw him stretchered off the pitch on Wednesday after clashing with Benfica keeper Artur. Messi has worked hard over the last few days to regain full fitness from an injury that turned out to be far less serious than originally feared.

Messi himself admitted the day after the match that he had expected something much worse. “When I first felt the knock, the pain made me imagine I’d be out for many months. After the tests and finding out that it is not a serious injury, I’m feeling a lot calmer” he said.

The striker trained normally this morning in a session involving all available members of the first team, plus Tello of Barça B. Apart from the news concerning Messi, there were further smiles at the Ciutat Esportiva with the medical clearance of all of Marc Bartra, Alexis Sánchez and Dani Alves. Abidal worked out in isolation. The team will fly to Seville on Sunday morning for a game against Betis that kicks off at 21.00. 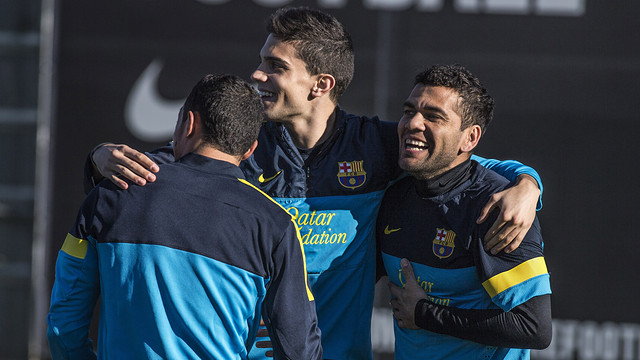 Alves and Alexis are back to full fitness and in Sunday’s squad, while Marc Bartra has been given the medical all-clear too

There was no shortage of good news on Saturday morning at FC Barcelona. Not only have fears concerning Messi’s fitness been dispelled, but Alves and Alexis are also back in the squad for the game at Betis. Both players are fully recovered from their respective injuries and have been included in Tito Vilanova’s list of 19 players that will be headed for Seville. The names left out are Montoya, Dos Santos and Bartra, the latter also having been declared fit on Saturday morning.

Marc Bartra pulled a muscle in his right leg while training on November 18. Alexis Sánchez has recovered from a sprained foot sustained while in international duty for Chile and Dani Alves has been out with a pulled hamstring in his right leg.

The first team flies south to the Andalusian capital on Sunday morning. The 15th match of the Liga season against Real Betis kicks off at 21.00, and will be shown live on Canal Plus.

The saturday’s training session before Betis match with Leo Messi 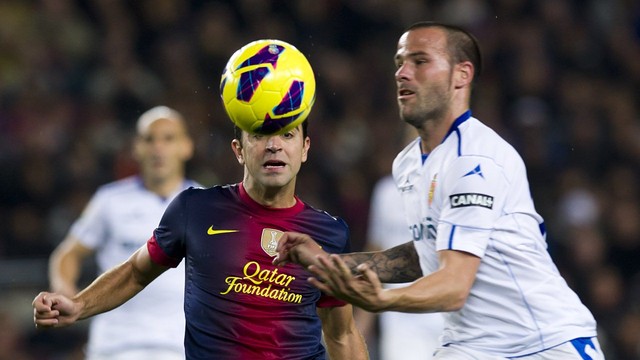 Barça will host Espanyol on January 6th at 19.00 and visit La Rosaleda
the following week to face Malaga on Sunday 13th at 21.00.

The LFP has released the dates and times for the first two games after Christmas and Barça will play Espanyol in the Camp Nou on Sunday January 6th at 19.00 and then travel to Malaga the following Sunday for a 21.00 kick off.

Barça still have four games left to play before the festive period, visiting Betis this Sunday (21.00), hosting Cordoba in the Spanish Cup on Wednesday 12th at 20.00, playing Atletico Madrid in the league on 16th at 21.00 and closing the year with a trip to Valladolid on 22nd with an 18.00 kick off. 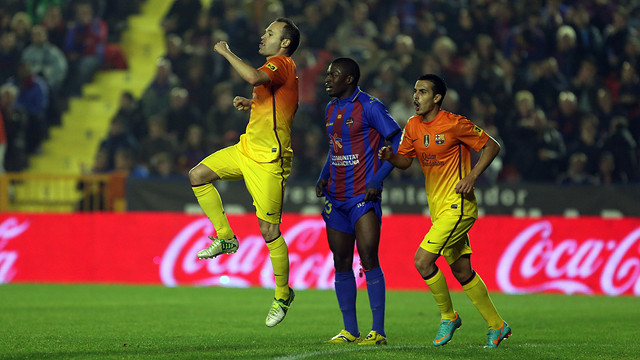 FC Barcelona will be looking for their eighth straight away win in Seville on Sunday – something they didn’t manage last season.

The Club record of 10 straight wins on the road was achieved under Pep Guardiola in the 2011/11 season.

A win against Betis – which has proved a difficult ground for Barça in recent years – would not just strengthen their position at the top of the table and stretch their record breaking start to the campaign, but would also bring them closer to the record of 10 straight wins on the road held by Pep Guardiola’s 2010/11 team
That run saw wins over Racing, Atletico Madrid, Bilbao, Zaragoza Getafe, Almeria, Osasuna, Espanyol, Deportivo and Hèrcules in the first ten away games of the campaign.