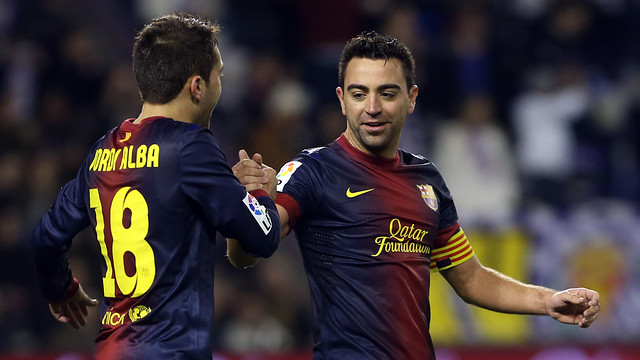 Barça will return to training on Tuesday at 11.00, at the Ciutat Esportiva Joan Gamper. Up to 10 FC Barcelona players, who will be with the Spanish national team, and Alexis, will miss the session.

Jordi Alba played at Mestalla once again but this time he donned the FC Barcelona strip. Barça were held to a one-all draw, but the defender put in a fantastic performance. After the hard-fought match, Jordi Alba said, “it was a very even match and either side could have won because both teams created chances.” After the Copa del Rey match against Real Madrid, Alba explained that “we were a bit tired because the Cup match was very demanding.”

“It has always been difficult”

The Barça defender also noted that “it’s always been difficult for Barça to come to Mestalla.” He added: “Valencia are very strong since Valverde arrived at the club and I’m sure they will up in the table at the end of the season.” The home team made it difficult for Barça, but the defender considers the one-all draw a fair result.

On his return to Mestalla, Jordi Alba explained that “I really enjoyed my time at Valencia, I can only say good things,” and “I noticed that a lot of fans still care for me, not all of them, but all opinions are respectable.”

Barça’s next match is scheduled for next Sunday at noon. On the scheduled kick off time, Jordi Alba noted “I think it’s a good time to play, we’re used to training in the morning and we’ll also have our fans on our side, and a lot of kids will be able to come.”

“If we can’t win, we must at least get a point,” said Alves

The Brazilian player considers that Barça did well to earn a point from tonight’s match. Alves was very clear that “we were not on form today, and when you can’t win you must at least get a point.” The Blaugrana was very direct when he was asked about the team’s form: “we should look for excuses. Valencia were very intense and we should be happy that we won a point.”

With that said, Alves noted that Barça “controlled certain parts of the match, despite Valencia’s pressure.” He also talked about the advantage over Real Madrid (16 points). “We shouldn’t look to the team in third place because there’s a team in second, they are closer and if we don’t pay attention they’ll could surprise us.” 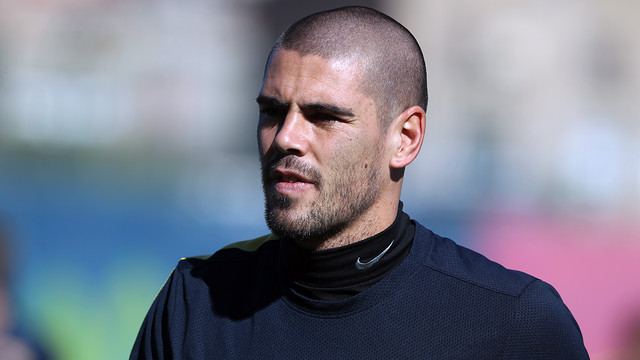 Jordi Alba’s return to Mestalla saw him put in a notable performance. The Catalan player was calm and collected as his team looked to score the go-ahead goal down his wing. In addition to Alba, Víctor Valdés played a crucial role in Barça’s success this evening. Despite conceding a goal to Banega, Víctor was sure and dominating in goal. He also kept his team in the game in the final minutes of the match.

Mestalla is a complicated ground for FC Barcelona. The fans are right on top of the players and the Valencia were well aware of the difficult task ahead of them as the referee blew the starting whistle. Valverde instructed his men to keep the lines tight, and he deployed his defence farther up the pitch in the hopes of catching Barça on the counter.

With this approach, FC Barcelona were not comfortable on the ball. Barça’s midfield was run by Xavi and Iniesta, however, neither of them found enough freedom to link up well with the Blaugrana forwards.

It became evident that it was up to Barça’s wide backs to unlock the Valencia’s defence. Jordi Alba and Dani Alves played a fundamental role in thinning out an overcrowded midfield.

Alba returned to Mestalla, the stadium that saw him make his debut in Spain’s top flight, and put in an all-around solid performance. He was intelligent, quick on the ball and voracious on defence. It was a special match for the defender, who recovered possession 10 times and sent in three crosses in to Guaita’s area.

Víctor Valdés also played a crucial role for Barça against Valencia. The home team took the lead thanks to a strike from Ever Banega. The keeper, who didn’t have a clear view of the shot through his defenders, was unable to divert the Argentine’s attempt.

After the goal, however, the keeper was a brick wall in goal. In the dying minutes of the match, Cissokho recovered possession and crossed the ball in for Soldado, who unleashed a shot that very well could have been the match winner if it had not been for the keeper’s fantastic save. 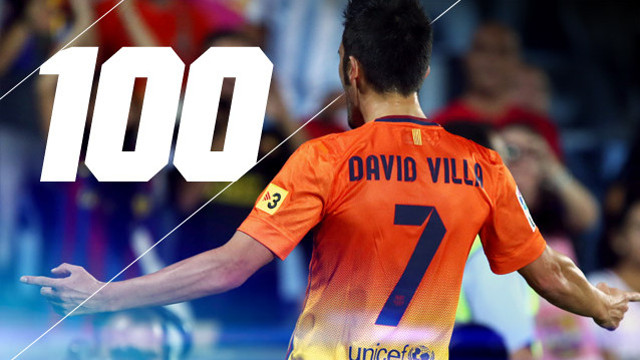 The Spaniard features in his 100th match for FC Barcelona

Villa made his debut on August 21 of 2010 and he scored his first goal for Barça on August 29 of the same year, against Racing Santander

David Villa made a triumphant return to Mestalla. The Spanish forward played his 100th game for FC Barcelona and he did it in front of the fans that watched him grow and succeed as a professional.

The Blaugrana forward has played 64 matches in La Liga, 10 in the Copa del Rey, 21 in the Champions League, 3 in the Spanish Super Cup, 1 in the European Super Cup and one in the Club World Cup for Barça. Villa has scored 42 goals from his 100 official matches for the Catalan Club.

Villa’s first year at FC Barcelona couldn’t have been better. He scored 23 goals from 52 matches: 18 in the Liga, 1 in the Copa del Rey and 4 in the Champions League.

On December 15 of 2011, in his 76th match as a Blaugrana, David Villa fractured his tibia during the Al-Sadd vs Barça Club World Cup semi-final match (0-4). Barça would go on to defeat Santos in the final.

On July 31 of 2012, seven and a half months after his injury, Villa was given the all clear to return to competitive play. He played his first minutes in the friendly against Dinamo Bucharest, and on August 19 he featured in in the 5-1 thrashing of Real Sociedad in La Liga. Villa scored the fifth goal of that match. 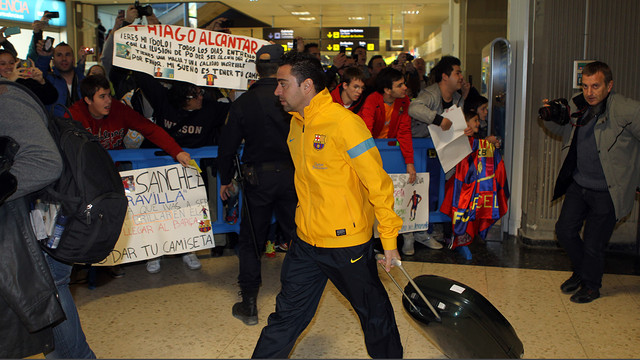 Barça arrived in Valencia this morning where they will face Ernesto Valverde’s team at 19.00 in Mestalla

Barça have arrived in Valencia, where they will play against Valverde’s team at Mestalla for Week 22 of La Liga. The team’s plan departed El Prat airport at 10.40 and landed in Valencia at 11.15.

The Blaugrana expedition is led by vice president Josep Maria Bartomeu and the directors Pilar Guinovart and Javier Bordas. The Club’s Director of Football, Andoni Zubizarreta, is also with the team.

The team went directly to The Westin Hotel upon arriving in Valencia. Jordi Roura has named 19 men to the squad for this afternoon’s match. 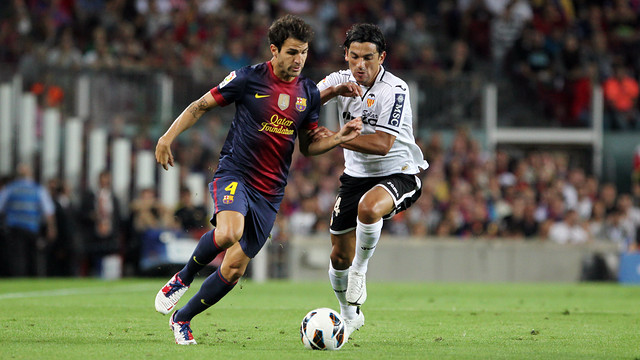 7 pm, Canal+ Liga, GolT – Barça looks for a prestige away win against a much improved Valencia

Non-stop football! Just days after the exhausting midweek duel with Real Madrid in the Cup, FC Barcelona goes down the Mediterranean coast to face Valencia in the Mestalla in what promises to be a tough match. Valencia has improved a great deal since former Barça star Ernesto Valverde took over and has had the whole week to prepare for the clash. Meanwhile, the Barça players have had just a few days to recover from their efforts in the Bernabeu.

Jordi Roura ha s called on 19 players for the trip down to Valencia. The only change from the squad that faced Real Madrid on Wednesday is the inclusion of Montoya in the place of Bartra. Tello also remains behind in Barcelona as do Abidal and Dos Santos, both of whom are still on the injury list.

Although the Mestalla is traditionally a difficult place to go, the fact is that Barça has a pretty good record there in recent years and is currently unbeaten in the last five seasons. The last time Barça lost there was in the 2006/07 season (2-1), when David Villa was still a Valencia player. Today, the Spanish international striker could make his 100th appearance for Barça. It will also be a special occasion for Jordi Alba, who returns to the stadium that was his home for the previous three seasons for the first time since signing for Barça.

Valencia on the up

Valencia is currently enjoying a bit of a revival under new manager Ernesto Valverde, who seems to have halted the slide experienced under former boss Mauricio Pellegrino. Despite a severe mauling from Real Madrid in the league (0-5) as well as a more respectable exit from the Cup against the same team (2-0 and 1-1 in the quarterfinals), Valencia has started to challenge again for a European finish in the league table. Now they’ll be hoping to reduce the gap with the top four with a win against the league leader.