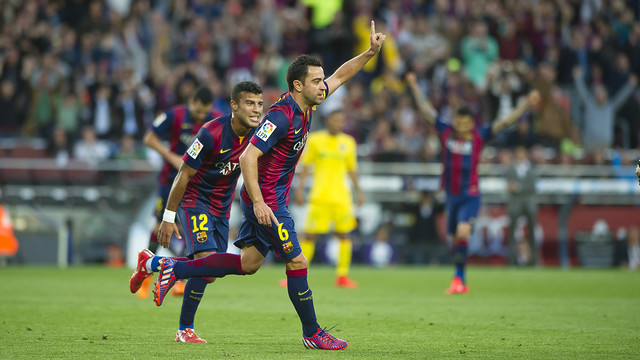 Barça bring their triumphant league season to an end on Saturday at 6.30pm CET

FC Barcelona secured the Spanish league championship with a win at Atlético Madrid last week, and did so with a game in hand, Saturday’s 6.30pm CET home fixture against Deportivo de La Coruña. It means that there will be a relaxed, party-like atmosphere at the Camp Nou as the team celebrates its 23rd Liga title and also pays tribute to legend and captain Xavi Hernández, who announced on Thursday that he is leaving the club after 17 seasons in the first team. As well as saying some words to the fans after the final whistle, the midfielder will be presented with the league trophy.

It’s a different matter for Deportivo though, because if results don’t go their way, they’ll be playing second division football next season.

Luis Enrique made it very clear that Xavi will be in the starting line-up for his last ever league game for FC Barcelona, and also hinted that Thomas Vermaelen will be in the squad and may well get to make his first-team debut. Being uncharacteristically frank, he also admitted that, with the Spanish Cup and Champions League finals to come in the next fortnight, this is a game in which he’ll be fielding several of the players that have not had as many chances as others this season. Jérémy Mathieu, still having trouble with his right Achilles tendon, will not play.

Deportivo boss Víctor Sánchez is missing the suspended Luisinho and the injured Manuel Pablo García, Cezary Wilk and Juanfran, the latter having failed to recover from a fractured left hand in time. Their absences mean places for José Rodríguez, Hélder Costa, Pablo Insua, and Roberto Canella.

“This is a match that should serve as a reinforcement for us going into the two finals that are left,” said Luis Enrique in his pre-match press conference. Indeed, he was asked very little about the Deportivo match and was instead quizzed about the upcoming finals and Xavi’s departure at the end of the season.

“Xavi made a decision that eventually had to be made, but he can still win two more titles,” he declared. “He’ll have a new and very enriching experience and he’ll also be able to see what he had at Barça.”

But although Barça have nothing but honour to play for, Sánchez is by no means anticipating an easy match. “We’re expecting the best Barcelona team and that’s what we’re preparing for,” he explained. “If they make changes it doesn’t mean they won’t have top quality players even if they aren’t quite international superstars.”

Barça are on an absolute high. The Liga title already secured, they are still on course for a historic second treble of league, cup and Champions League, which would mirror what Pep Guardiola achieved in 2009. And they are in perfect form, having won their last six league matches, while scoring 21 goals and conceding none – the ideal end to a season in which Claudio Bravo is now certain to win the Zamora trophy for the best goalkeeping record in the first division.

Deportivo had been looking doomed after spending 21 weeks in the relegation zone, but a 2–0 win against Levante finally lifted them into relative safety last week. They are now tied on 34 points with Granada, but if either of those two sides slip up, then either Elche or Almeria, on 32 points, could stay up with wins at home to Córdoba and Valencia, respectively.

During Deportivo’s golden era around the turn of the century, results between these sides would go either way. But the Galicians are currently winless against the Catalans in nine attempts and haven’t scored in their last four visits to the Camp Nou (although in 2011 they did manage a scoreless draw).

Barcelona had little trouble when the sides met at Riazor earlier this season, winning 4–0 thanks to yet another Leo Messi hat-trick and an 83rd minute own goal from Sidnei.

No matter where you are in the world we have you covered. And remember, you can enjoy live commentary in English on Radio Barça. The link will appear at fcbarcelona.com just before kick-off. Twitter users can follow @FCBarcelona for a live feed of all the action. 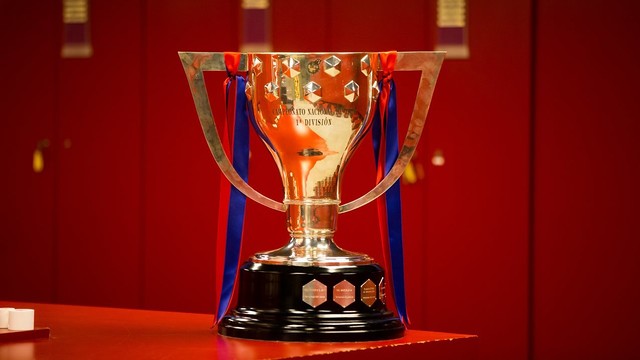 FC Barcelona clinched the title last weekend and will get the hardware on Saturday, after the Deportivo match

The La Liga trophy has landed at Camp Nou. On Saturday, after FC Barcelona face Deportivo in the final league match of the 2014/15 season, the Catalans will officially receive the hardware affirming their status as this year’s top team. The trophy is patiently awaiting Saturday’s ceremony at the Club’s main offices.

Xavi to raise the cup

The cup will be officially handed over by Spanish Football Federation President Àngel María Villar, who will place it in the hands of Xavi Hernández, the FC Barcelona captain and legend, who announced on Thursday that he’s leaving the Club at the end of the season after 17 years playing for the first team. 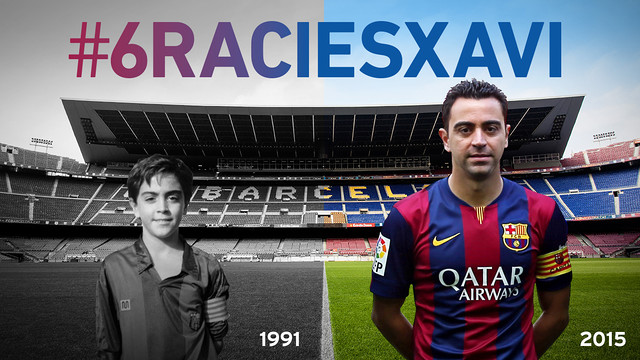 After the final game of the league season against Deportivo, the captain will collect the trophy and then be honoured following the announcement of his departure

On Saturday, FC Barcelona will play the last game of the 2014/15 league season at the Camp Nou against Deportivo la Coruña (6.30pm CET) and fans coming to the stadium will be able to enjoy all the excitement of celebrating the 23rd Liga title in club history and also take part in a thoroughly deserved send-off for club legend and first team captain Xavi Hernández, who has announced that he is leaving at the end of the season.

Xavi was just 11 when he joined FC Barcelona and came up the ranks before making his first team debut 17 seasons ago. He has gone on to make a record number of appearances in a Barça shirt and has won more honours than any other player in Spanish football history.

Before the game starts, there will be a photocall on the grandstand forecourt, where fans can take their picture with the thank you image that has been especially designed for Xavi’s farewell. The fans will also be able to help form a mosaic to celebrate the conquest of the Liga title and also unfurl a giant banner to bid Xavi farewell.

When the game is over, Xavi will be presented with the league trophy, the eighth time he has won it. The title celebrations shall then commence and there will be a special goodbye ceremony for Xavi, including a video on the stadium scoreboards and some words from the man himself.

Join in on social networks

In addition, from Thursday a series of activities have been set in motion on social networks so that both fans and colleagues can post their tributes to Xavi.

As the club has already done for other first team players, it will be inviting fans from all around the world to put on their shirt and use the hashtag #6raciesXavi in honour of the most decorated player in club history.

The club’s website will be displaying some of the best tweets and posts from the fans using the #6raciesXavi hashtag, as well as others using the usual ones: #FCBWorld and #FCBFans.

Supporters can also honour Xavi in their social profiles by downloading the images that FC Barcelona has created in testimony to a man who has been in the first team for no fewer than 17 years.

Against Deportivo on Saturday, the club will also be wearing a special shirt bearing the words ‘Thank you Xavi – 23 May 2015’ (in Catalan) to commemorate the day of his last ever Liga game at the Camp Nou. 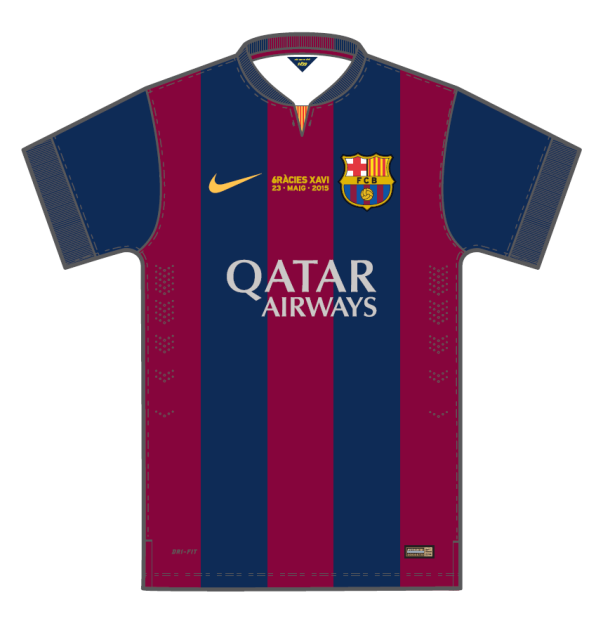 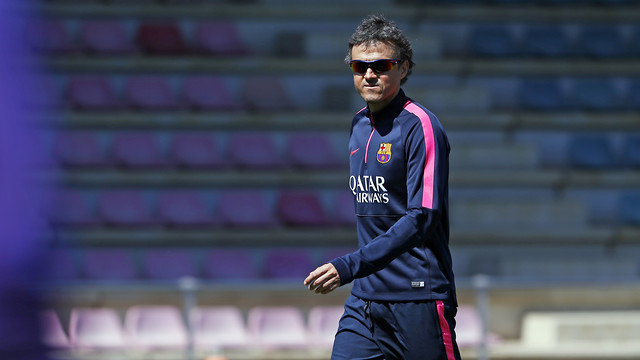 FC Barcelona head coach Luis Enrique Martínez made an exception and announced ahead of time the names of two players who will be guaranteed minutes in Saturday afternoon’s match at Camp Nou against Deportivo de La Coruña. Kick off is set for 6.30pm CET and, as always, the game will be televised globally. Luis Enrique confirmed that Xavi Hernández will start in his last league match at the Camp Nou and Thomas Vermaelen will make his official Barça debut. The coach also said that those players who have played fewer minutes this season will have chance to play.

Although Barça have nothing to play for, having already wrapped up this season’s league title, Luis Enrique said that the game against Deportivo “is a match that should serve as a reinforcement for us going into the two finals that are left.” [[CITA_1]] When asked about Xavi’s decision to move on from Barça, Luis Enrique said: “Xavi made a decision that eventually had to be made, but he can still win two more titles. He’ll have a new and very enriching experience and he’ll also be able to see what he had at Barça.”

He also referred to the two finals that still lie ahead. “Finals are very special matches. The atmosphere is wonderful, the stadium is 50/50 with fans for both teams,” he said, talking about the coming duels with Athletic Club and Juventus.

Here are some of the other things Luis Enrique had to say:

“Xavi’s been the captain for many years, but even before that he was a leader in the dressing room.”

“I’ve seen unity in the dressing room since the beginning of the season.”

On his coaching staff

“I have a very well-prepared coaching staff. I’m extremely happy with them.”

For me, Xavi is still good enough to play one more year for Barça. But it’s his decision. 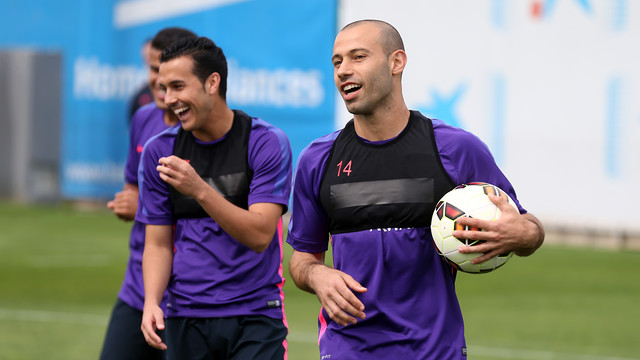 FC Barcelona worked out on Friday morning in what was the team’s final training session before hosting Deportivo La Coruña at Camp Nou on Saturday. Luis Enrique had all of his players available, except for Sergio Busquets, who worked out alone for the second straight day.

Saturday’s game against Deportivo kicks off at 6.30pm CET at Camp Nou. Barça clinched the La Liga title last weekend. After the game the team will celebrate this year’s championship with the fans, who will also bid farewell to Xavi Hernandez.