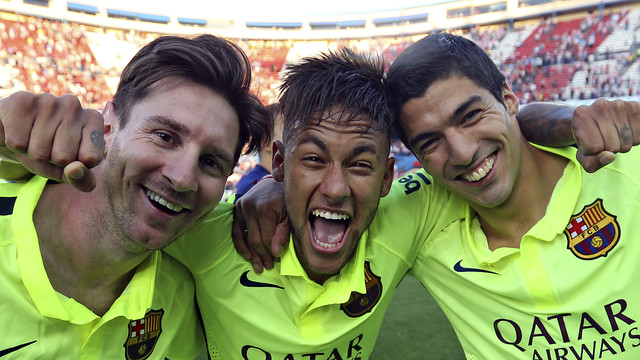 Barça’s front three have outscored all their European rivals

Messi, Neymar and Suárez ended the league campaign with the best stats of any front three in Europe –81 goals and 39 assists.  Messi averaged more than a goal a game, Neymar pushed on from last season to record his best stats since joining the Club and Suárez bounced back from missing the start of the season through suspension to re-establish himself as one of the world’s most incisive strikers.

A look around the European leagues put the Barça trio’s efforts in context: in Spain, second placed Real Madrid’s, Cristiano Ronaldo, Benzema and Gareth Bale have bagged 76 goals between them, with a total of 35 assists, whilst the front three of  Barça’s Champions League opponents Juventus – Tévez, Morata and Llorente have scored 45 goals, with 13 assists. Over in France, PSG’s Ibrahimovic, Cavani and Lavezzi. have claimed 45 goals, with just 9 assists and at Pep Guardiola’s Bayern Munich, Robben, Muller and Lewandowski have managed 47 goals and 22 assists

Leo Messi has been Barça’s leading scorer and provider in the league with 43 goals and 18 assists, which gives the Argentinean an astonishing average of 1.13 goals  – his third best figures at the Club.

Neymar has built on last season’s start and scored 22 league goals– 13 more than in his debut campaign- whilst providing 7 assists and Luis Suárez, who was suspended for the first 8 games of the season, managed 16 goals in his 27 appearances and provided 14 assists, a figure only bettered by Messi and Cristiano Ronaldo. 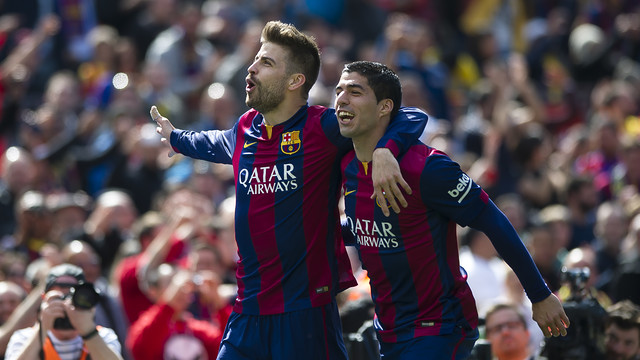 Answer 38 questions, one for every game of the season, about Barça’s league title winning campaign 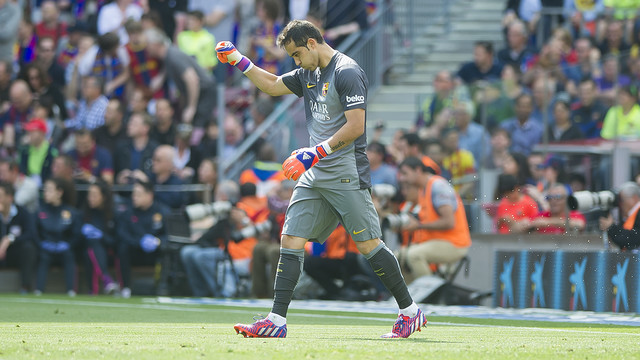 Claudio Bravo will have some personal hardware to go along with FC Barcelona’s La Liga title this season. The Chilean goalkeeper not only played a huge role in FC Barcelona’s league championship campaign this season, but he’ll also add his very first Ricardo Zamora Trophy, awarded to the La Liga goalkeeper with the best goals againsta average.

Bravo’s numbers are spectacular, having only given up 19 goals in 37 league games this season, well ahead of Valencia’s Diego Alves, who conceded 29. Bravo did not play the final game of the season, giving way to Jordi Masip after the team had clinched the La Liga title with a game to spare. With Saturday’s two goals conceded to Deportivo, Barça have given up 21 in total this season. No team has surrendered fewer goals since the 1993/94 season, when Deportivo only gave up 18.

In addition to the Zamora Trophy, Claudio Bravo set two new records this season. He set a new La Liga record by going 754 minutes without conceding to open the season, surpassing Pedro Maria Artola‘s previous record of 560 minutes which was set in 1977/78. In addition, Bravo racked up a record 23 shutouts in the 37 games he played. The previous record of 20 was achieved by both Valdés (2004-05) and Andoni Zubizarreta (1988/89). 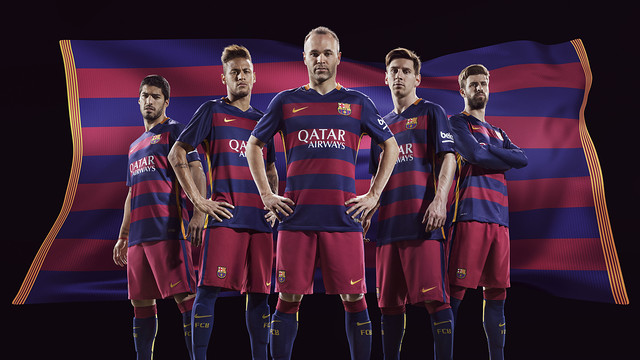 The famous Barça stripes will be hoops, inspired by the horizontal stripes of the Barça flags that fans wave on match days at the Camp Nou

On Tuesday 26 May the ‘blaugrana’ shirt will be on sale at NIKE.COM/FCB and club shops

“These new kits are a homage to the club, its fans’ passion and its incredible sporting history”, comments Martin Lotti, Creative Director at Nike Football. “The kits are the result of a close collaboration between FC Barcelona and Nike and reflect a profound understanding of the unique cultural importance of the club and our shared commitment to revolutionising the sport of football”.

On 26 May the shirt will be available at NIKE.COM/FCB and in the shops.

The four maroon horizontal stripes stand out on a blue background, a design that is 100% blaugrana for fans all over the world. A yellow gold rivet with four thin red stripes surround the outside part of the collar, stylised and modern and on the inside of the collar the club’s famous logo ‘More than a Club’ can be seen, just as it can be in the stands at Camp Nou.

The yellow golden stripe on sides of the shirt continues down the shorts which are in the classic red of FC Barcelona.

The new socks for the first team are blue with a red stripe in the top part where a wide stripe of small chevrons in the calf area can be seen in golden yellow.

Both for the first and second kits there will be a special form of lettering for the names and numbers of the players, more refined and thinner for the coming season.

Check out the Nike developments 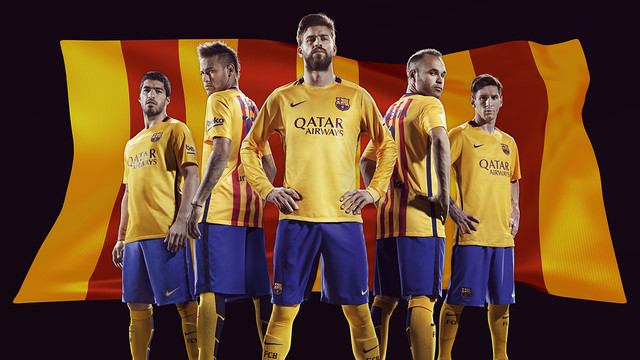 The Catalan flag is the inspiration for this shirt, with four red vertical stripes on the back over a golden yellow background

The ‘senyera’, the iconic flag of Catalonia, that is so important in the city and club’s culture, is the inspiration for the second strip, with evocative colours and plenty of details.

The new second strip is golden yellow, a tone associated to Catalonia. There are four vertical red stripes on the back over a golden yellow background from top to bottom. The design is inspired by the way that FC Barcelona fans drape the Catalan flag over their backs like a cape, thus expressing their passion for Catalonia and the club.

The shirt will be on sale from June 25 and features a modern, rounded collar, which is yellow in front to match the neck of the shirt, and has two stripes on the back in the typical Barça colours around the neck, in recognition of the usual first strip colours. Inside the neck we find the famous club slogan, ‘Més que un club’.

The shirt also has a blue line on each side. These go down to the sky blue shorts as well, which is a nod to the kits that so many legendary FC Barcelona players wore in the early 1970s.

This season, FC Barcelona has a second option for the shorts, a golden yellow model with a blue stripe on the sides, which clearly reflects Catalan pride in the form of yellow from head to toe.

The new golden yellow socks of the second strip include a wide blue stripe with little crests on the calves.

For both the first and second kit, the exclusive FC Barcelona font for the player names and numbers has been modified. It has been slightly refined for the new season, looking sharper and thinner.

Check out the Nike developments