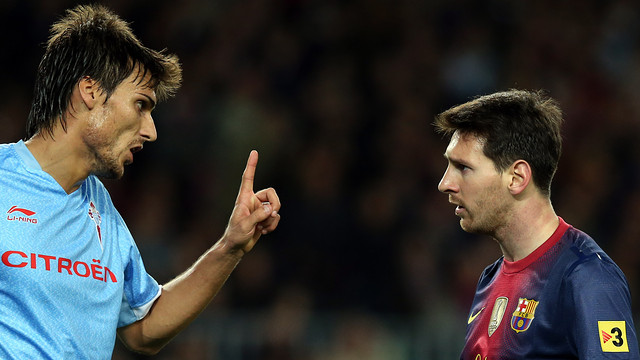 The other side of the match against Celta 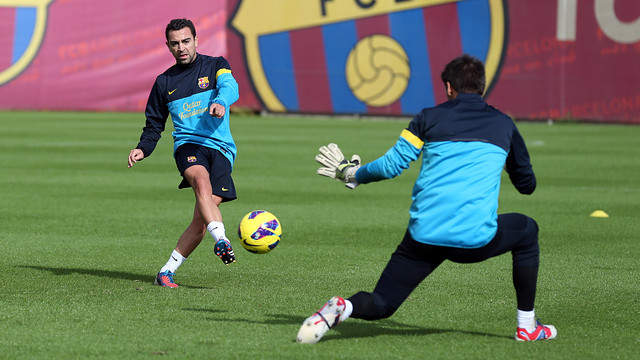 The first team will face Celtic in the Champions League in Glasgow on Wednesday, four days later the team will play away to Mallorca in La Liga

Barça will travel to Glasgow on Tuesday, a full 24 hours before the Champions League match against Celtic FC. In addition to the clash against the Scottish team, Barça’s schedule this week will conclude with another match away from the Camp Nou. Tito Vilanova’s team will face Mallorca on Sunday at 17.50.

10.00 – Training session at the Ciutat Esportiva

11.00 – Training session at the Ciutat Esportiva 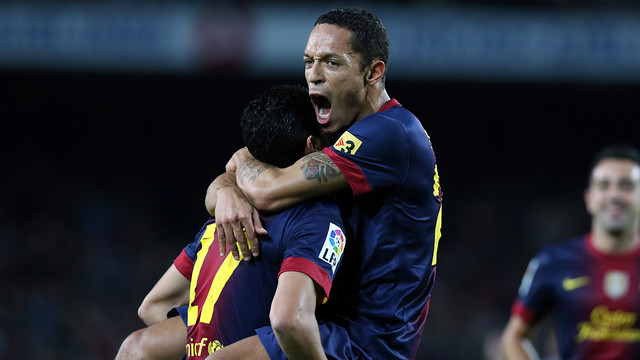 The FC Barcelona backline has scored seven goals so far this season with contributions from Adriano (3), Jordi Alba (3) and Puyol (1)

FC Barcelona has a free-scoring defence. With the campaign still in its early days, Adriano (3), Jordi Alba (3) and Puyol (1) have chalked up seven goals between them.

Here are just a few more of the stats thrown up by the win against Celta:

– Of the 46 Barça goals this season, seven have been scored by defenders. Adriano has hit three in the league, Alba has scored two plus one in the Champions League, while Puyol has added one in the league.

– Saturday night was the first time in a year that Barça defenders have scored twice in a match. On 19th November 2011, Piqué and Puyol contributed two of the goals in the 4-0 defeat of Zaragoza.

– Both of Alba’s league goals have come against Galician teams (Deportivo and Celta) while in the Champions League he scored against …Celtic.

– Villa has a personal tally of 6 goals in 12 competitive games. Celta keeper Javi Varas has the worst record against Barça’s Asturian striker, having conceded three.

– The win against Celta, together with the 2-0 defeat of Atletico Madrid away to Valencia, mean that Barça have pulled away from Atletico after three match days sharing the top spot. Barça led the table from day one until Atletico went level on points the weekend that Barça drew at home to Real Madrid (2-2).

– In terms of goal scoring opportunities, the match was more balanced than usual. Even so, Barça were superior in total shots (13 to 11) as well as shots on target (6 a 4). However, in terms of passes, Barça were streets ahead with a total of 914 to Celta’s 395, and 847 completed passes to 315.

– Cesc and Valdés are the only members of the squad to have started all ten league matches.

– Vilanova has used 22 players in his starting line-ups in 17 competitive matches. In the first team squad, only the injured Muniesa, Abidal and Cuenca have yet to appear, together with Jonathan Dos Santos. Barca B players Sergi Roberto and Tello are also still waiting for their chance in the starting line-up. 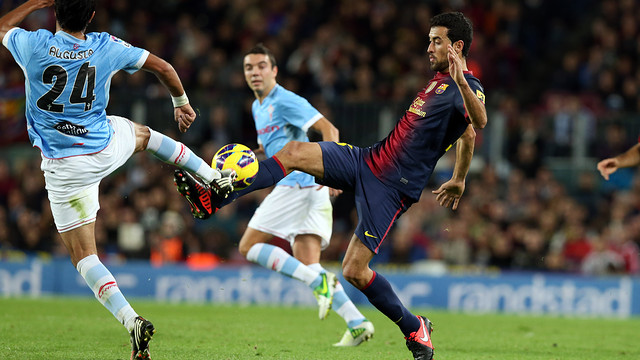 The Blaugrana midfielder, who played parts of the game against Celta in the centre back position, said that “Barça had more control of the match in the second half”

Barça will train this Monday at 11.00 at the Ciutat Esportiva ahead of the Champions League clash with Celtic FC. After the session, Marc Bartra will hold a press conference.

Sergio Busquets played a crucial role for Barça against Celta as he alternated his position between the team’s back line and the midfield. Barça started the match with a three-men at the back, with Busquets playing in the holding midfielder position, and on various occasions the player dropped to plug the holes in the team’s sparse defensive line. On the positions he played this evening, the player said: “I’m a midfielder but I can play in the centre defender role as well. It’s about helping the team, always.”

In addition to the three points won against Celta, the team broke the Club record for the best-ever start in La Liga. When asked about the team’s new record, Busquets said that “records are a part of history and we know how difficult it is to achieve them.” The midfielder was also pleased with how the team played against Celta: “It was a bit difficult at first and Celta created a couple of chances, but in the second half we had a lot more control and they weren’t as dangerous.”

Injuries, the only piece of bad news from tonight’s match

With the addition of Adriano to the team’s long injury list, Barça will be without yet another defender for at least three weeks. “The injuries are the saddest thing about our start to the season, I really hope all the injured players can return to competitive play soon,” he said. When asked about the upcoming match against Celtic, a match he cannot play due to suspension, he said: “The players are very eager to clinch qualification to the next round of the Champions League and we’ll try to seal our passage to the knock-out round in Scotland.”

Here are the statements made by the FC Barcelona players after the 3-1 victory over Celta:

“I’m a left back, but I like to go forward and it’s always nice to score goals”

“We read the game well after Celta’s first counterattacks. We had more control in the second half”

“I feel great, I’m very comfortable on the pitch and I’m sure that I’ll improve as the season goes on”

“The fact that we broke the record says a lot about the team. We’re very eager to do a good job and I’m sure the team will improve”

“I’m sure that we’ll have difficult moments this season, but we have to take advantage of this situation”

“It’s almost impossible for Messi to have a bad game. He had a couple of chances today but he was unlucky in front of goal” 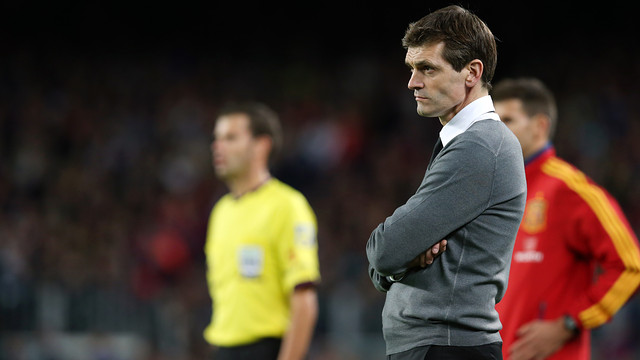 The Barça manager believes that the team’s record-breaking start to the season is simply “anecdotal.” However, the manger noted that his team’s impressive run “is a demonstration of how eager the players are to win”

Vilanova also said that “Piqué might play against Celtic” this week

Zubizarreta: “This start to the season has been practically impeccable”

The director of football Andoni Zubizarreta played down Barça’s record-breaking start to La Liga: “The objective is not to have the best start but to get to the month of May and win the title.” However, he did note that the team has been “practically impeccable” in the first months of competitive play.

On the match, Zubizarreta went on to analyse Barça’s three-man defence: “It’s an addition option. It’s a strategy we’ve developed here at home. The manager is the one who decides these things.” He added: “This team has the capacity to play many different styles of football, even in the same match.”

On Villa, who scored one of Barça’s three goals, Zubizarreta said that “he never gave up and he’s showing us what he’s capable of.” He also congratulated Leo Messi for becoming a father and he said “everything that’s good for the person is good for the footballer.”

Tito Vilanova became the first manager in Club history to lead Barça to nine wins in the opening ten games of La Liga. The Catalan played down the importance of breaking the long-standing Club record and placed more importance on the 28 points won so far this season. “Besides the record what’s important are the points that we’ve won,” said Vilanova. The manager went on to praise his players for the attitude they displayed in tonight’s match against Celta: “It’s not easy [to break these kinds of records] seeing that you have to beat teams like Celta. This record is a demonstration of the desire these players have to win.”

“Piqué could play against Celtic”

Adriano, who picked up an injury this evening and will miss the next three weeks of competitive play, is the latest defender to join the team’s long injury list. Vilanova admitted that the Brazilian’s injury “ is troubling.” However, the manager is hopeful that he’ll be able to use Gerard Piqué in the team’s next match. “We have a training session on Monday. We’ll see if there’s a possibility for Piqué and Puyol to join the team. It’s possible that Piqué will be fit for the match against Celtic.”

Vilanova also explained why he named Messi to the starting line-up even though the Argentinean didn’t train on Friday: “He was fit enough to play and he told me that he was eager.” The manager also played down the fact that Messi didn’t score this evening.

The manager concluded his press conference by congratulating David Villa. “He takes an additional step each day,” said Vilanova as he reminded the press that the forward has scored in Barca’s last three matches. “We’re very pleased that he’s making a good return to competitive play and that he’s as eager as ever after such a serious injury.”