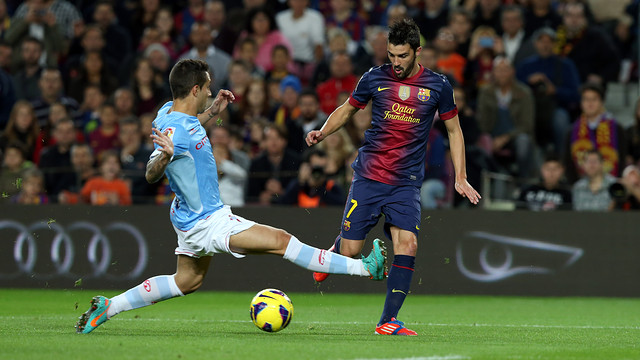 The goalscoring mark set by Tito Vilanova’s men means that they are level with Helenio Herrera’s 1959/60 team are only bested by the 42 goals scored by Daucik’s Barça in 1950/51.

Barça are dead set on winning the 2012/13 Liga title. They remain undefeated in the competition and have won 34 out of 36 possible points.

The Blaugrana have scored 39 goals from their 12 La Liga matches, averaging 3.25 goal per game, which makes them the most effective team in front of goal – beating out Real Madrid, who have 32 goals.

Taking a look back, the men managed by Tito Vilanova came very close to breaking the mark set by Fernando Daucik’s Barça, the Barça team that scored the most goals in Spanish football history in the first 12 games of the competition (42). This year’s team are just behind Daucik’s legendary squad (1959/60) and level with Helenio Herrera’s men, who also scored 39 goals from their first 12 Liga matches.

Of Barça’s 39 goals this season in the Liga, 17 have been scored by Leo Messi. This feat not only makes the Argentine the team’s top scorer, but it also takes him to the top of the goalscoring list of the domestic competition, five more than Cristiano Ronaldo, who’s in second place with 12 goals. Another curious fact: Messi has more goals than 12 top-flight teams. 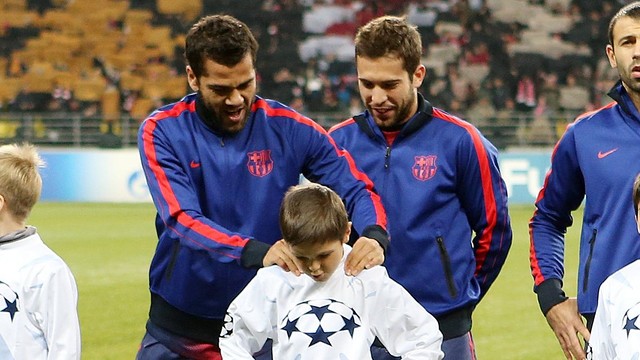 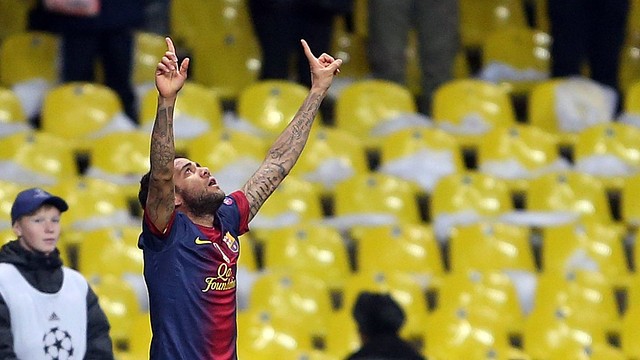 All details about the match in Moscow

– Vilanova: “The players once again showed how great they are”

– Messi: “Everything worked out perfectly”

– Nine consecutive Round of 16 berths for FC Barcelona

– How Barça will fight the cold in Moscow

– Vilanova: “You can’t beat anyone easily in the Champions League”

– Cesc Fàbregas: “The pitch and the cold won’t be a problem or an excuse”

– Spartak-FCB a guarantee of goals

– Barça have never lost in Russia 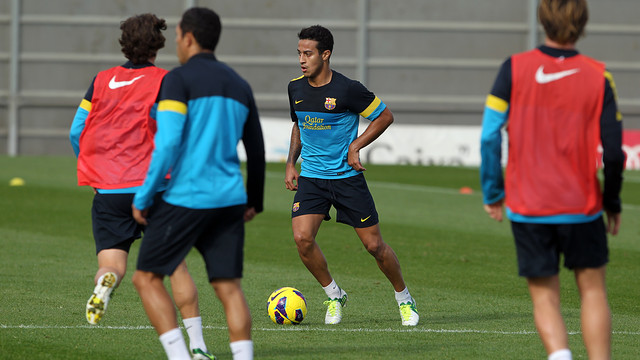 The first team trained together with Barça B today, with the starters against Spartak involved in a recovery session

After flying home from Russia this morning, the first team trained at midday, with Thiago and Adriano joining despite still carrying injuries. Thiago is on the road to recovery after tearing ligaments in his right knee on September 29 against Sevilla, while Adriano injured his right thigh against Celta on November 3.

The Wednesday session at the Ciutat Esportiva saw the first team work out with members of Barça B, with the players that started against Spartak limiting their exercises to the customary after-match recovery routine. 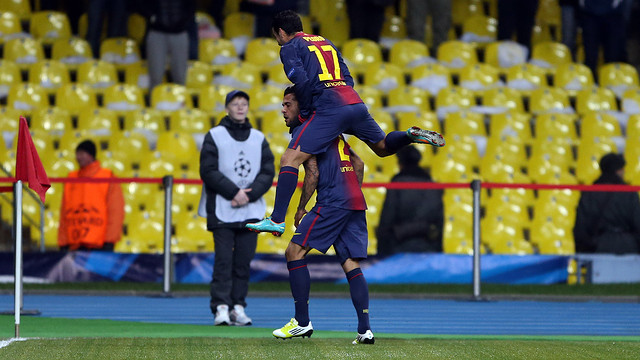 FC Barcelona, after comfortably winning 3-0 in Moscow, have qualified top of their group for the sixth season in a row

Five players have started every game in this Champions League: Valdés, Mascherano, Xavi, Pedro and Messi

– The win in Moscow means FC Barcelona have won their group for the sixth time in a row, and qualified for the second round for the ninth consecutive time.

– Valdés, Mascherano and Messi are the only players that have played the full 90 minutes of every Champions League game so far.

– All three, along with Pedro and Xavi, are the only players that have started every game in the competition so far.

– Cesc Fàbregas, who started last night, has now made 75 Champions League appearances. His debut was in 2004/05 for Arsenal, and since then he has scored 20 goals in the competition, two of which have come in his 13 appearances for Barça.

– Mascherano and Busquets won the most balls in Moscow, 12 and 11 respectively.

– This was the third time season that all of Sergio Busquets, Xavi, Iniesta and Cesc have played alongside each other. The quartet also featured in the home wins against Real Madrid and Celta.

– Jordi Alba has started in 11 of FC Barcelona’s last 12 matches. The only game he has missed recently was the cup tie with Alavés, when Tito Vilanova opted to rest him.

– The Brazilian full back hadn’t scored since February 26 away to Atlético Madrid (1-2).

-Following last night’s brace, Messi now has five goals in the Champions League and is just five short of Gerd Müller’s record for goals in a calendar year (85).

– Gerard Deulofeu played in his first game of the season last night. But it was not his Champions League debut, for last term he came on against BATE at the Camp Nou (4-0).

– In the 20 official matches played this season, FC Barcelona have managed to keep six clean sheets (four times away and twice at the Camp Nou).