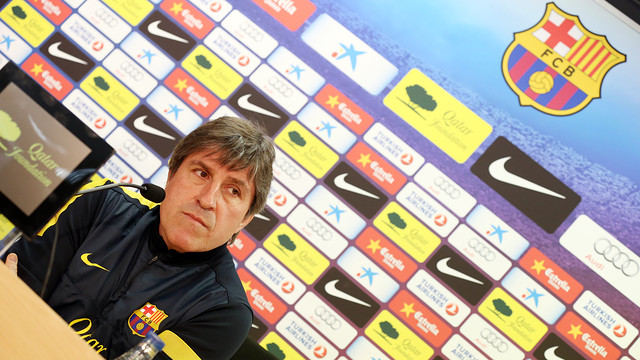 The Barça assistant coach told reporters on Saturday: “Tito Vilanova sees all the matches and we even have a system of cameras that allow him to see the training sessions”

As regards the early kick-off on Sunday, Roura said: “It’s a special match because of the time but we will try and go out there with the maximum intensity”.

Tito Vilanova has been receiving medical treatment in New York now for a few weeks but Jordi Roura confirmed today that he is being kept fully up to date on the players and is taking an active part in all decisions regarding the matches and the training sessions. “We’ve been in permanent contact with him all the time thanks to new technologies. He’s more active than ever, he’s feeling really well. Tito has access to all the matches and the reports, and that allows us to talk about it all. There’s only a slight difference even though he’s not here”. He also revealed that the exchange of information is not just limited to talking during the matches: “We even have a system of cameras that allow him to see the training sessions”.

Turning to the Getafe game, Roura made special mention of the unusual kick-off time of 12 noon. In addition, no fewer that 14 players from the first team squad were involved in international action in midweek so the coaching staff may be thinking of team rotation: “The time is special but we will try and go out there with the maximum intensity and get stuck into the game so that these factors don’t affect us. One or two players may be tired but in four days you can recover quickly. We’ll see how everyone is and then decide the starting eleven”.

A win against Getafe will be the perfect way to start a busy February programme: “Getafe is a team that always been difficult for us as they defend well and are strong at the back. Now we’ve got two games in a week and it would be really important to be able to win them ahead of the Champions League and the Cup. But the reality is that we have to take each game as it comes”. 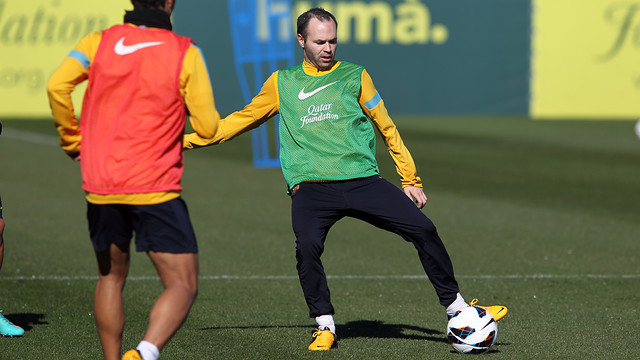 Xavi, Dos Santos and Abidal have been excluded due to injury

The Barça coaching staff have called up 20 players to face Getafe in the Camp Nou on Sunday at midday.  The only names missing from the list due to injury are Xavi, Dos Santos and Abidal.  Given the early kick-off, the players will report for duty at 8.15 on Saturday evening.

The players had their final training session before the match on Saturday morning, following on from a day off on Friday.  The session passed off without incident and featured the reappearance of number 2 keeper Pinto who had missed the previous session due to a stomach bug. 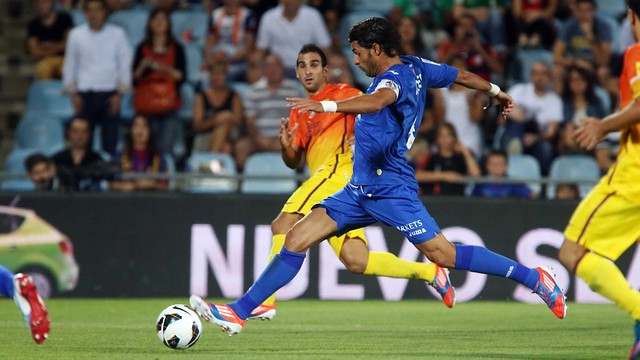 In September of 2012, Getafe hosted FC Barcelona at the Coliseum Alfonso Pérez for Week 4 of La Liga. Interestingly, just like this week, the match in Madrid was preceded by an international break. Barça managed to stave off the dreaded FIFA Virus and won 1-4 thanks to goals from Adriano, Leo Messi (2), and David Villa.

Getafe sit 12th in the table on 29 points from 22 matches. The Madrid-based team have earned six points from their last five matches thanks to three draws (0-0 against Atlético Madrid, 2-2 against Granada, and 1-1 against Sevilla) and one win (3-1 over Deportivo). Their only defeat since the start of the new year was away to city neighbours, Real Madrid (4-0).

Matches like tomorrow’s against FC Barcelona could very well dictate the fate of Luis Garcia Palza’s men, who are only five points adrift of the sixth spot in the table (currently occupied by Valencia), which gives direct access to next season’s Europa League. Conversely, Los Azulones (team nickname) have a nine point gap between them and Celta de Vigo, who sit in the relegation zone.

Getafe’s defence is led by Alexis, who arrived from Sevilla in the summer of 2012, and goalkeeper Moyá. Unfortunately, the keeper, who has only allowed 12 more goals than Valdés in the domestic competition this season, was shown a red card in last week’s 1-3 victory over Deportivo, and will miss tomorrow’s match due to suspension. His likely substitute will be Jordi Codina. Codina is a Real Madrid youth-academy graduate who was promoted to Los Blancos’ senior side before he signed with Getafe in 2009.

Getafe have netted 28 goals this season. Of those, five have scored by Diego Castro, three by Álvaro and another three from the defender Alexis. Their midfield – which usually lines up with two defensive midfielders and three ‘creators’ (4-2-3-1) – is anchored by Xavi Torres, which leaves Barrada and Gavilán free to develop and create chances for the likes of Colunga (centre forward) and Diego Castro. 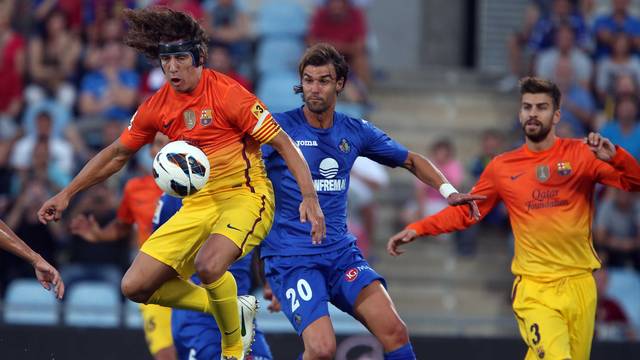 With Barça clear at the top of the table, attention will focus on the bottom, with Mallorca’s new boss Manzano facing Osasuna, Deportivo hosting Granada and Celta at home to Valencia

Two six-pointers at the bottom, whilst Atletico travel to Rayo and Levante and Malaga meet in the fight for European spots

With the sacking of Joaquim Caparros in midweek, Gregorio Manzano has returned to Mallorca, who he previously managed in 2002 and from 2005 to 2010. He faces a tough task as he takes his team into their must-win six pointer with Osasuna, knowing that they are without a home win since September, but on his appointment he insisted: “I know the squad and the club. We need 120% from all of the lads now, but I am convinced we have the quality to stay in the top flight”. Mallorca are currently next to bottom on 17 points, four behind Osasuna, who are just outside the relegation zone. On 16 points, Deportivo are in last place and they too have to get a result at the Raizor against a Granada team boosted by last week’s win over Real Madrid. Granada, on 23 points, could lift themselves clear of the relegation dog fight ahead of next week’s visit from Barça, whilst a defeat could see them drop into the bottom three.

Celta are the other team involved in the relegation places, sitting in 18th on 20 points, and they face a tough task when Valverde’s Valencia, who come into the game on the back of three wins away to the other teams at the bottom – Osasuna (0-1), Granada (1-2) and Deportivo (2-3) and their 1-1 draw with Barça last weekend. Valencia could lift themselves into fourth spot with a win – a great boost ahead of Tuesday’s Champions League game against PSG – if Malaga slip up in their trip to Levante. Pellegrini’s side have won just once in the league in 2013 and although they have a good record on the road – having conceded just six goals all season – Levante, just three points behind Malaga, have one of the best home records and have won their last three games at the Ciutat de Valencia.

Rayo: “won’t settle for a draw”

Rayo have also put themselves into the European mix with an impressive run that has taken them to seventh on 34 points and they will prove difficult opponents for Atletico Madrid in the Madrid derby on Sunday – as their striker Chori Dominguez declared on Friday: “we’ll not settle for a draw – we want a win”. The other Madrid team, Real, play Seville at the Bernabeu and with the Champions League game against Manchester United on the horizon, Di Maria is rested, whilst Xabi Alonso hasn’t yet recovered from his groin strain, though Mourinho can welcome back Pepe after his injury layoff. Seville will be looking to take advantage of any lack of concentration from their hosts and build on the excellent start made by Unai Emery, who is still unbeaten in the league since taking over from Michel last month.

With just one defeat in their last twelve games – and that a narrow 4-3 result at the Bernabeu- Real Sociedad are one of the league’s most in form sides and a win in Zaragoza on Sunday would take them to 36 points, level with Malaga, whilst Betis – on 35 – host Valladolid on Monday night with the chance to put an end to their recent run of poor results that has seen them take just one point from the last three games.

In the weekend’s other game, Espanyol travel to the Basque Country to take on Athletic Bilbao on Sunday and maintain their excellent recent run under Aguirre with four draws in La Liga, three wins and just one defeat – against Barça – since the Mexican took charge. A win for the Catalans would take them above Bilbao, whose irregular season has seen them so far win less than half of their games at the traditionally safe San Mames. 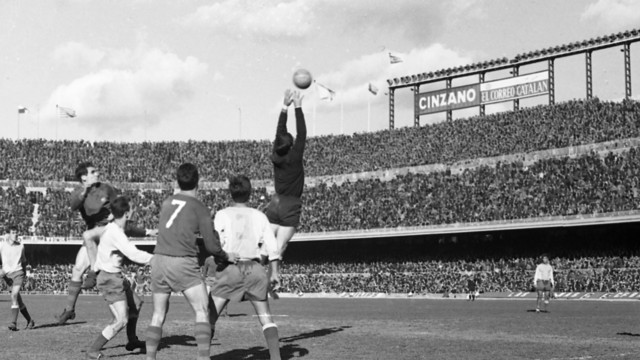 Barça won 3-2, thanks to goals from Müller, Benítez and Eladio

The last league game that Barça played at the Camp Nou in the morning was on Christmas Day 1965, when they kicked off at 12 noon against UD Las Palmas. Managed by Roque Olsen, Barça won 3-2 with goals from Müller, Benítez(penalty) and Eladio.

The morning had begun nearly two hours earlier when the then B team – Condal – and Langreo kicked off at 10.15. The game ended in a resounding 8-1 win for the locals, with goals from Feliu (5), Martí Filosia, Giralt and Navarro.

From the 1920s through to 1970, it was a tradition to stage a friendly game at the Barça ground on Christmas Day, first at Les Corts and then at the Camp Nou . The last such Christmas friendly was played in 1970 against CSKA Sofia, where Barça lost 1-4 in front of 60,000 spectators who had turned up for the 12.15 kick off.

Before the CSKA game, a Women’s Football match was held –kick off 11.25 – between Barcelona, who were trained by Antoni Ramallets and UE Centelles.