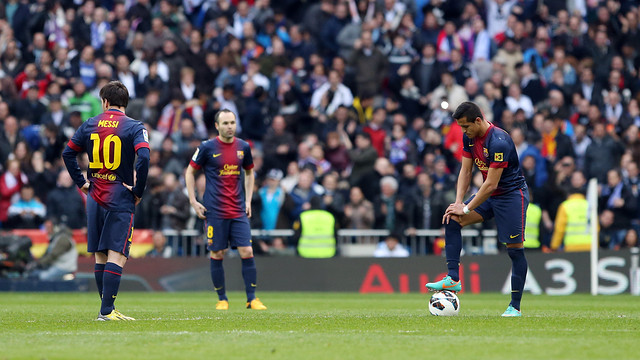 The defeat on Saturday at the Bernabeu was only the second of the season for FC Barcelona in La Liga. Here we look back at some of the stats of El Clásico

– Messi also broke Roberto Carlos’s record for the most appearances in Clásicos with 25.

– Messi has now scored in an incredible 16 consecutive league matches. He’s already scored 50 goals this season, 39 of them in the league. He’s the first player in the history of Spanish football to score 50 or more goals in three different seasons.

– Víctor Valdés, Dani Alves, Gerard Piqué and Messi himself are the only players to have featured in the starting line-up in the last five league Clásicos in the Bernabeu.

– Last Saturday’s defeat ended a run of four seasons without losing in the Bernabeu in the league. Since losing 4-1 on 7th May 2008, Barça had chalked up three wins and a draw.

– Dani Alves made his fourth goal assist in the last seven league games.

– Finally, Real Madrid had 14 shots, of which six were on target and one hit the post. Barça produced five shots, two of them on target. 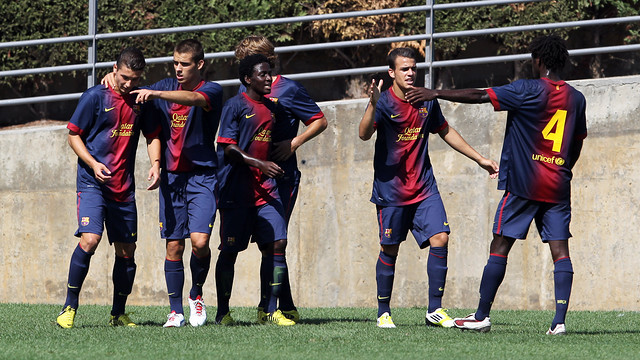 Live match corresponding to round 25 of the División de Honor (Group 3). If Barça win, they will mathematically clinch the title

Live match from the Ciudad Deportiva Joan Gamper between the FC Barcelona and UE Cornellà U19 teams. 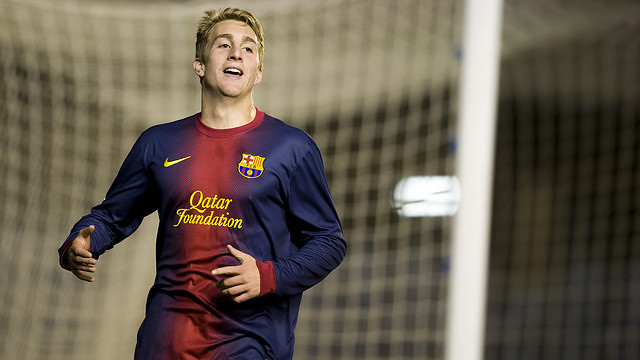 The game between Barça’s reserve side and Las Palmas ended in a three-all draw. Las Palmas took an early lead thanks to a strike from Tato, but Rafinha brought Barça level just before the break. Deulofeu was decisive in the second half as he fired Barça ahead. However, with 10 minutes to go, Oier committed a penalty and he was shown a red card. Bañuz, the reserve keeper, saved the penalty but he was unable to save the subsequent shot from Nauzet. Deulofeu, once again, scored to give Barça B the lead, but Hernán, in the last minute of the match, brought the home side level. 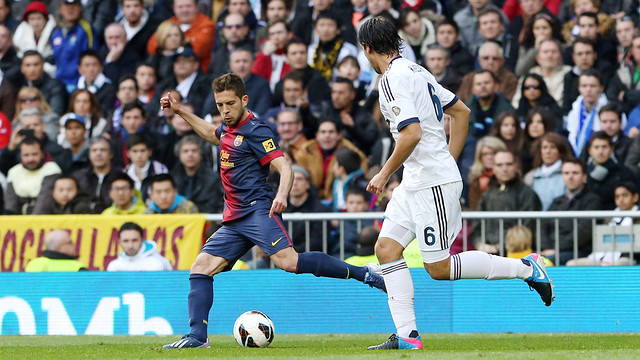 On FC Barcelona’s upcoming matches, the Catalan notes: “We have to give it our all and even more so when we play against Milan. We have confidence in ourselves”

Jordi Alba, David Villa and Alex Song won’t return to Barcelona with the team. The three Barça players were given permission to not return with the team.

After this afternoon’s match, FC Barcelona hold a 13-point advantage over Real Madrid in the league. Alba, who spoke to the press after the match, said: “we’re leaving without any points but we know we have a good advantage over Atlético and Real Madrid.” In addition, he said, “it was a fairly equal match and a draw would have been the fairest result.” After two bad results against Madrid, the full back said, “we have to give it our all and even more so against Milan. We have confidence in ourselves.”

“We managed to have possession, but they hurt us on set pieces and long balls,” said Alba. The full back, however, would like to move on after today’s defeat to Madrid: “we need to leave this behind and focus on the match against Deportivo and Milan.”

Alba also explained his gesture to the Madrid fans after Messi’s goal: “my gesture to the fans wasn’t bad, I used my index finger to show that Messi is the best in the world and that he deserves the praise.”

Gerard Piqué, who also talked to the press after the match, declared: “we were a little better today than we were at the Camp Nou, but we have to give a lot more of ourselves.” He added: “we weren’t fluid like we usually are and we’re missing certain things. We’ve had these bad moments when we won a lot of titles, but we have to end this poor streak as soon as possible … I don’t think it’s the right moment to criticize our style of play, we’ve secured a lot of good results with it.”

The Blaugrana centre back didn’t hide his disappointment with this afternoon’s defeat at the Bernabéu: “we know that when you come to the Bernabéu you have to be very superior to Real Madrid in order to win.” Despite the setback, Piqué wants to focus on the future: “we’re confident that we’ll eliminate Milan, but first we have to defeat Deportivo … we have the right team to get out of this situation.” 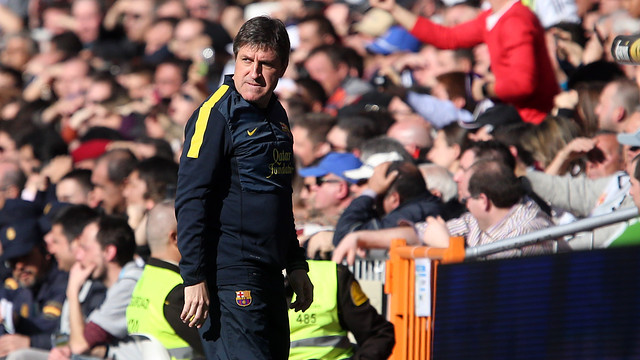 FC Barcelona’s assistant manager admits that “we intended to extend our advantage over Real Madrid,” but, despite the result, he’s pleased “with the team’s attitude.” He adds: “They fought until the end”

“It was a very complicated match. It’s always difficult here. The team worked hard and we had our chances,” says Roura

On the possible no-call penalty on Adriano at the end of the match: “the images are sufficiently clear and eloquent”

“This is the league. We came in with a 16-point gap and we wanted to extend our advantage over Real Madrid,” said Jordi Roura in the press room of the Santiago Bernabéu. After the match, the Blaugrana manager said, “we have to pleased with the team’s attitude. We had our chances of winning points. We’re coming off of a fairly difficult week and we had to play in a difficult stadium and the team fought until the end.” He added: “it was a very complicated match. The team worked hard and we had out chances. It’s obvious, however, that the result is what counts.”

Along the same lines, he said, “we’ve had a couple of hard weeks with a lot of very intense matches with few days to rest. But I don’t think we have a physical problem. Despite the result, we had our chances to win points.”

“We tried to control the game”

“We tried to always have control of the match and I think we did that throughout most of the game. We didn’t want the match to break down. But perhaps we weren’t solid enough in the first minutes, when Madrid were strong and very dangerous,” said Roura, who went on to say that’s why his team opted to retain the ball for longer periods of time. “Real Madrid’s style is to take advantage of your errors and that’s why it was important retain control.”

Lastly, on the possible penalty not called in the final minutes of the match, the assistant manager simply said that “the images are sufficiently clear and eloquent.”