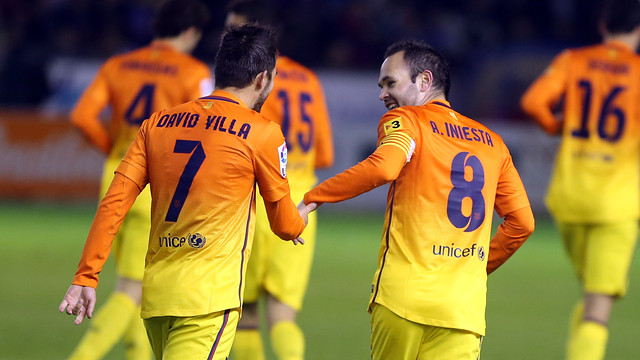 Barça have presented a wonderful image of themselves in their cup debut at Alavés of Division 2B, winning thanks to three terrific goals from Villa, Iniesta and Cesc

Barça have got their cup title defence off to an impeccable start with a convincing win away to Division 2B outfit Alavés. There were clearly no problems with motivation for this round of 16 visit to Mendizorroza, in which they showed all of their class against a side that had a very definite idea about the kind of tactics they would need to employ in order to deal with the difficult task of taking on the league leaders. But ultimately, Alavés were up against a far superior side, and three tremendous goals from Villa, Iniesta and Cesc have set the Catalans on perfect course for a place in the next round.

Working as hard as ever

With all of Valdés, Alba, Xavi, Pedro and Messi rested, Tito Vilanova still managed to field a highly competitive starting eleven. Pinto, Alves, Mascherano, Bartra, Iniesta, Sergi Roberto (the only member of the B team) and Alexis were all back in the side, while the only players that had featured against Rayo were Montoya (on the left), Busquets, Cesc and Villa.

What ensued was a highly intense game of football between two teams with very clear ideas. Alavés were not afraid to attack, but also retreated into defence when called upon in an impressively organised fashion. Barça, however, were clearly in control of the possession, using the wings more than they usually do, possibly because of the absence of Messi in the middle. Indeed, it was from a run down the right that Alves created the first chance of the night for Alexis, which home keeper Urtzi dealt with expertly in the 13th minute.

The defending champions pushed and pushed in search of the opener. Without reservations. And they needed to be insistent, because they were up against a side that was belying its lower league status. Although strikers Alexis and Villa were looking incisive, Barça found it difficult to create clear-cut chances, and when they did come, the aforesaid duo were failing to find any magic over the last few metres. But in their second major opportunity, Villa made no mistake. Following a sloppy clearance by the home defence after an Iniesta effort, Villa pounced on the loose ball and sent it homeward with a left footed strike that deflected off the crossbar and over the line. 39 minutes gone, and Barça were ahead thanks to an absolute peach of a goal.

Having conceded the first goal of the night, Alavés were obliged to push up the field with a little more ambition. Naturally, this gave Barça more room for manoeuvre and a crafty interception of the ball as it was moved out of the Basque defence ended with it at the feet of Iniesta. And from the edge of the area, the midfielder sent the ball delicately floating into the back of the net. Fifty minutes gone, and Mendizorroza despaired. Moments later, an Alexis goal was disallowed for inexistent offside. Alavés had been impressively tight at the back up until this point, but after going two goals down their shape was hopelessly lost as they assumed greater and greater risks in the hope of pulling a goal back. The most important thing on their minds was to go to the Camp Nou with at least some hope of turning the tie around.

Tito Vilanova opted to send on Song, Tello and Dos Santos for Busquets, Villa and Iniesta. Pinto was handed the captain’s armband but the FCB stopper was practically one further spectator as the game became a monologue of Barcelona possession and pressure, with the side from Vitoria now merely playing for pride.

Cesc worked, Sergi Roberto directed and Alexis deserved a goal. It could have been a rout if it hadn’t been for some extraordinary saves from the home keeper, but shortly before the final whistle, Fàbregas headed home a pinpoint cross from Alves and Barça were rewarded for never sitting back on the two-goal cushion. They are already on good course in the Champions League and Liga, and tonight have got their Copa del Rey campaign off to an equally impressive start. Barring a miracle comeback from Alavés in the second leg, they are through to the last sixteen. 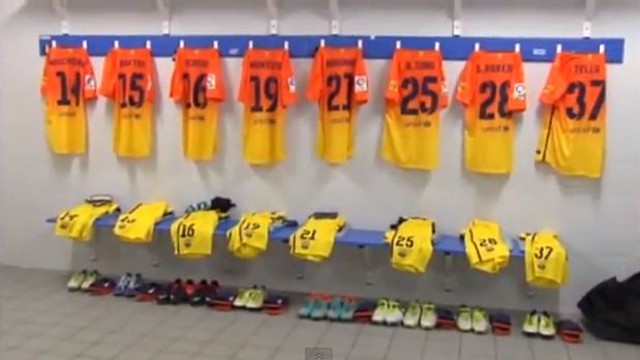 22.00, Marca TV – The reigning champions of the Copa del Rey will kick off its defence of the title against the leaders of Segunda División B in the away leg of the Round of 32, against Deportivo Alavés 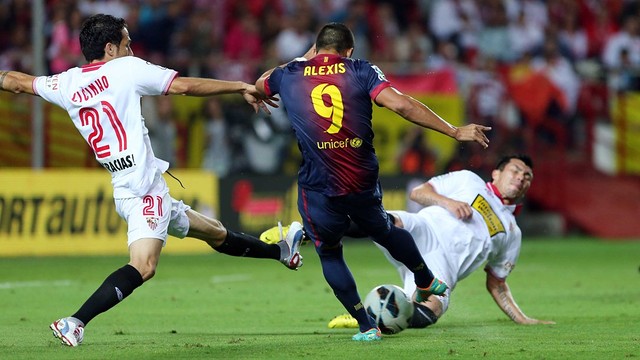 Atlético Madrid kept pace with Barça at the top of the table with a 3-1 win over bottom club Osasuna, whilst Málaga dropped two points at Espanyol in this weekend’s La Liga action

Falcao notched up his tenth goal of the La Liga season as Simeone’s team brushed aside Osasuna 3-1, with Miranda and ex-Osasuna idol Raul Garcia getting the first two for the hosts,  who stay level on 25 points with Barça. The win was Atlético’s 22nd consecutive game without defeat. Málaga have also made a great start to their season – both domestically and in Europe- but they were unable to break the deadlock on Saturday against Espanyol, who were grateful for just their sixth point of the season, with trips to Seville and Real Sociedad before the potential six pointer at home to Osasuna. Third from bottom Deportivo stay a point ahead of Pochettino’s team after they held on for a point in Balaidos against Celta after the hosts had been reduced to ten men soon after the break when defender Cabral was shown red.

Real Madrid stay fourth after a 0-5 thumping of Mallorca – Ronaldo and Higuain both scoring twice- whilst Betis are a point behind them after beating Valencia 1-0 thanks to an early goal from the aptly named Salva Sevilla and a stellar performance from keeper Adrian. Levante are sixth and after their 3-1 win over Granada, with two goals from Nigerian striker Obafemi Martins, they now have the second best home record in La Liga, with four wins and just one draw.

“Football is treating us too harshly” according to Sevilla boss Míchel after his side went down 2-1 in Zaragoza, who chalked up their second home win of the season and lifted themselves into the top half of the table, just two points behind Sevilla in seventh. Getafe sit between Zaragoza and Sevilla, following their 1-2 win at San Mamés, as Bilbao crashed to their fifth defeat of the campaign and stay firmly entangled in the relegation dog fight.  Bilbao’s fellow Basques Real Sociedad took their first away point of the season in an entertaining Monday night draw at Valladolid with Griezman getting both the visitors’ goals. 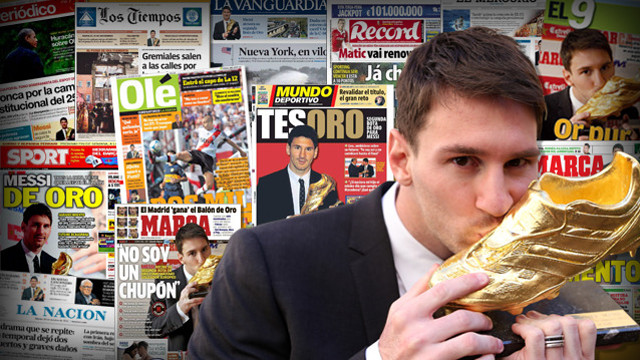 The day after collecting his second Golden Boot, the ’10 ‘FC Barcelona is one of the most visible faces on the covers of several newspapers around the world 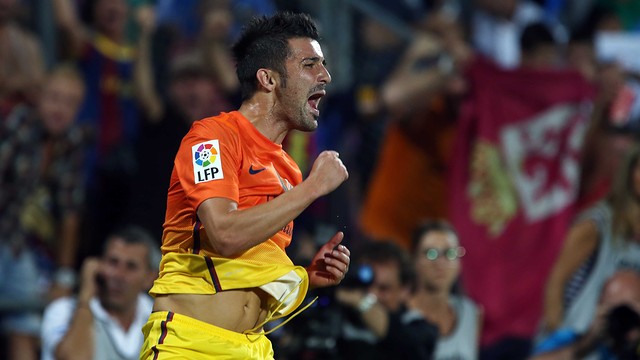 22.00, Marca TV – The reigning champions of the Copa del Rey will kick off its defence of the title against the leaders of Segunda División B in the away leg of the Round of 32, against Deportivo Alavés

FC Barcelona will kick off its defence of the Copa del Rey title this evening. The first obstacle in the way of the reigning champions is a team that currently plays in the Segunda División B, but Vilanova’s men know better than to take the match lightly. Deportivo Alavés, Barça’s rival, currently sit atop of Segunda División’s Group 2 and they’re favoured to win promotion this season. This Cup fixture is much more dangerous than it might seem, warned Tito Vilanova on Monday.

The Blaugrana manager has decided to name many first team players to the team for the away leg against Alavés. However, five of the most utilised players by Vilanova won’t make the trip to Vitoria. They are Valdés, Messi, Xavi and Pedro, the four first team footballers that have played the most this season for Barça, and Jodri Alba, who has featured in Barça’s last six starting line-ups. Three Barça B players – Oier, Sergi Roberto and Tello – will also suit up against Alavés in addition to the first team players that were named to the team by Vilanova.

Therefore, Pinto will probably continue to be the starting keeper for Barça in Cup and players like Bartra and Dos Santos might be named to the starting team.

Four years in Segunda B

Deportivo Alavés have a long history in Spanish football. It’s worth nothing that they played the final of the UEFA Cup 11 years ago. However, Alavés have been battling it out in Segunda B for the past four seasons. The men led by Natxo González have won eight matches and only lost twice this season. This string of results have allowed Alavés to storm to the top of the table of Segunda División B’s Group 2, and if they continue on this excellent form they’ll undoubtedly be one of the strongest contenders for promotion this year. Barça be warned, in yesterday’s pre-match press conference González stated that “we can beat Barça.”