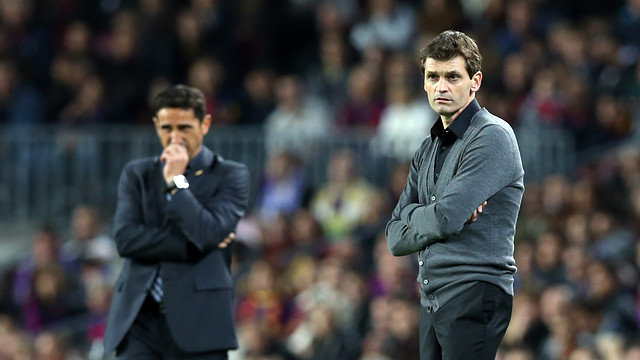 The manager doesn’t agree with Manolo Jiménez that the match the Barça-Zaragoza was won solely by Messi, seeing that “we need all of our players because just one man can’t win you the match”

“It’s important to get players like Puyol and Piqué back. We hope to get Adriano and Thiago back soon,” said Andoni Zubizarreta after the match. When asked about Alexis’ injury, the FC Barcelona’s director of football said, “this doesn’t disrupt our plans, that’s why we have a large team.”

On Wednesday many of Tito Vilanova’s players were away with their respective national teams, but they didn’t let him down as they claimed the three points against Zaragoza at the Camp Nou this evening. The Barça manager praised his players for their hard work against Los Maños:  “The effort of the players after international week stands out.”

After the game, the Zaragoza manager, Manolo Jiménez, said that “that match is won by whoever has Messi [on their team].” Vilanova responded by pointing out that it’s “too simple” to think about football like that. He added: “Leo is a very good but we need all of our players because it isn’t possible to win with just one man.”

The Catalan went on to praise Zaragoza for their match at the Camp Nou: “They are a team that wanted to play football. It seems as though more and more teams simply don’t to play and for us it’s good that they played for the three points and didn’t close themselves off at the back.”

Vilanova also explained why he subbed Puyol out of the match in the second half: “I wanted to give Jordi Alba some rest but he told us to have a player ready just in case Puyol needed to come off. I decided to sub him out because he hasn’t played in a long time and we’ve been having [injury] problems with our centre backs.

The manager, when asked about the Puyol-Piqué duo in the middle of Barça’s defence, said, “it’s good for all of us to have them back on the team. This also allows us to rest players like Mascherano. They’ll regain their form and their performances will improve over time.” 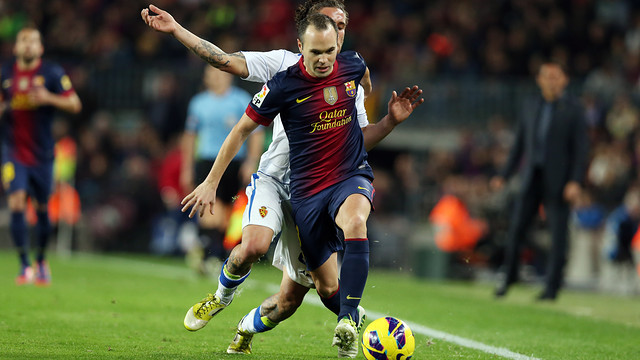 The Spanish midfielder almost scored one of the best goals of the night but he was denied by the woodwork. “It’s a question of centimeters with these types of plays and sometimes they don’t go in,” said Iniesta

Barça will return to training at 11.30 tomorrow at the Ciutat Esportiva Joan Gamper. After the session the team will travel to Moscow, where they’ll face Spartak on Tuesday for Week 5 of the Champions League Group Stage.

Andrés Iniesta’s performance against Zaragoza improved as time ticked off the clock and he was on the verge of scoring one of the best goals of the night but was denied by the woodwork. The Spanish midfielder noted that “it’s a question of centimeters with these types of plays and sometimes they don’t go in.” On the match, Iniesta said that “Zaragoza make you run, they wanted to have the ball and that wears you out.”

Errors that need to be corrected

Despite the amount of goals conceded by Barça this season, the midfielder said said that “football is a game between two teams, and our opponents come to play. We need to correct our errors so we don’t concede as many goals, but these are things that can happen.” Iniesta concluded his post-match interview by praising Leo Messi, who scored a brace this evening taking his goal tally in La Liga to 17. The midfielder said that “we’re used to Messi making the difference in matches, he’s unique. I hope his form and the team’s continues.”

Montoya in the starting line-up

The right back Martín Montoya played the entire 90 minutes and he assisted Messi for Barça’s last goal of the night. The defender noted that “it’s a pleasure to play at the Camp Nou, I feel very comfortable with the team and the fans.” On the match, the Catalan said that “Zaragoza made it difficult for us because they have good players in the midfield and they surprised us in a couple of plays.” For Montoya “it was key to react quickly after they equalised,” and he noted that Barça face “a complicated match” against Spartak Moscow on Tuesday “due to the artificial turf and the cold” in the Russian capital. He added: “If we play well against Spartak we’ll have our options of winning the match.”

“I’m very pleased that we won and I’m happy that I got to play.”

“The fact that Messi is breaking so many records is good for the team because it means we’ll be remembered in the future.”

“The most positive thing about the match are the three points we won.”

“Zaragoza played a good match and at times they displayed a very high level of play, but in general I think we were the superior side.” 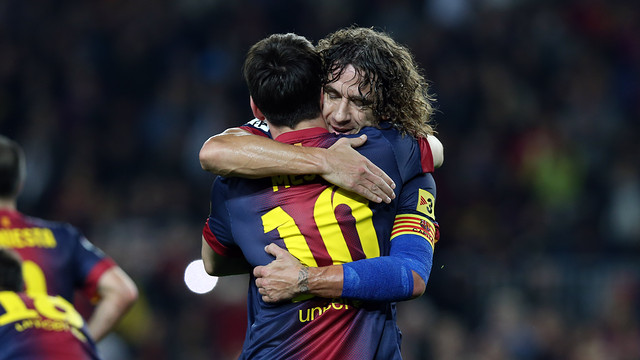 Barça won their eleventh game of the twelve league games this season tonight, beating Zaragoza 3-1 with two goals from Messi and Song’s first for the team

Tito Vilanova’s men have taken 34 of the first 36 points in play in La Liga after another convincing win at the Camp Nou tonight, seeing off Zaragoza and showing no ill effects from the international break. A brilliant start saw Leo Messi put Barça one up and although Zaragoza got their equaliser, Song soon restored the lead and in the second half Messi scored his 78th goal of the calendar year. Barça finished the game with ten home grown players on the pitch.

Puyol and Piqué were back at the heart of the defence and Barça began strongly, dominating possession and moving the ball about at pace to pin Zaragoza back in their own half. Within a minute, Jordi Alba broke down the left and set up Messi, who shot wide, but the Argentinean didn’t make the same mistake on 15 minutes, when he again linked up with Alba and slipped the ball past the Zaragoza keeper for the opener.

Song gets his first goal for the team

Barça looked comfortable on the ball, attacking en masse and recovering possession quickly, but Zaragoza then equalised with their first attack. Montoya blocked a Montañes effort and gave away a corner, from which Montañes himself hit a shot which hit Puyol and beat Valdes. The draw didn’t last too long though, as from another corner Messi controlled a loose ball and set up Song to make it 2-1 with his first goal since joining the Club.

Messi finishes the game off

That goal saw the game begin to open up and even though Barça kept control, they lost some of the fluency and Zaragoza even managed to threaten Valdes with a couple of efforts. After the break, Xavi imposed some order on the game again and on the hour mark, Montoya crossed for Messi to fire home with a clinical finish. Soon after, Tello came on for David Villa.

Zaragoza threw on Postiga and looked to dead ball situations to get back into the game, but with Puyol – who received a standing ovation when he was taken off – replaced by Bartra, the Barça defence stood solid. Iniesta was set up by Cesc on 78 minutes and saw his effort hit the woodwork as Zaragoza began to leave spaces at the back, but Barça were content to avoid any problems and control the final minutes with their trademark passing style.

All details about press conferences at Camp Nou 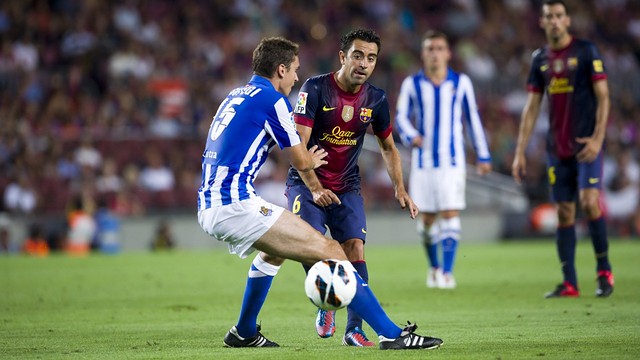 With Atlético not playing until Sunday night, Barça could go 6 points clear on Saturday, whilst 3rd place Real Madrid could close the gap on their neighbours to 2 points if they beat Bilbao

At the bottom, Ossauna will be looking to build on their win over Espanyol last week when they entertain Malaga, whilst Pochettino’s men face a tough task away to Valencia. Both Deportivo and Celta are at home  – to Levante and Mallorca – and will fancy their chances of putting some space between themselves and Espanyol.

Atlético Madrid travel to Granada on Sunday for a game their captain Gabi reckons: “is one of those games you have to win if you want to be up there at the top”. Their hosts will be boosted by last week’s win at Betis, but could be without midfielder Mikel Rico, as they look for a home win after two defeats to Zaragoza and Bilbao, whilst Atlético have so far lost just once on the road. Real Madrid could close to within a couple of points of Atletico if they can see off Athletic Bilbao on Saturday night: Mourinho can count on Ronaldo after his cut head against Levant last week and Khedira and Benzema are likely to return, whilst the Basques will be without the suspended Herrera and De Marcos and the injured Iñigo Perez.

Betis face Sevilla in the Seville derby at the Sánchez Pijuan – a game the hosts striker Álvaro Negredo reckons is: “different from any other match and a must-win game. If you look at the table, you’d have to say that they come into it as favourites, but we are both coming into the game on the back of defeats”. Betis are currently fourth on 19 points, four ahead of tenth placed Seville.

Málaga are just a point behind Betis, but after back to back league defeats to Rayo and Real Sociedad they could have asked for an easier trip than Saturday’s to Pamplona, where Osasuna will be looking to build on their win at Espanyol last week. Osasuna have only won once at home so far this season, but that conceals a brave effort against Barça(1-2), a 0-1 defeat to Valladolid after a late winner for the visitors, draws with Betis and Mallorca and  – perhaps more ominously for Málaga – a 4-0 thrashing of Levante. That’s a record Manuel Pellegrini was no doubt well aware of when he warned on Friday: “it doesn’t matter where they are in the table, Osasuna is always a difficult place to visit – they really let you know that they are the home team and though they’ve had some poor results this season, I’m sure we will be up against a tough opponent”.

….and a tough one for Espanyol too

With just a point more than Osasuna, Espanyol, who are also embroiled in presidential elections at the moment, face a tough trip to Valencia – two hours after kick off in Pamplona – and could go into the game back at the bottom. Their hosts are also in need of points, with home form vital to offset their terrible away record and will be without the injured Pereira, Gago and Jeremy Mathieu as well as the suspended Aly Cissokho, whilst Pochettino has dropped Capdevilla and will be without the suspended Stuani.

Celta and Deportivo favourites at home

Celta and Deportivo are both a point ahead of Espanyol and will be looking to move further ahead with home games against Mallorca and Levante. Celta – whose players all took part in Wednesday’s General Strike in Spain – have only lost once at home so far, whilst Mallorca have still to win on the road. Deportivo haven’t been quite so effective in La Coruña – winning two, drawing one and losing two more – but Levante haven’t been great on the road either, with just one away win from home.

In the weekend’s other games, Getafe are at home to Valladolid on Sunday and Real Sociedad host Rayo in the Monday night match.