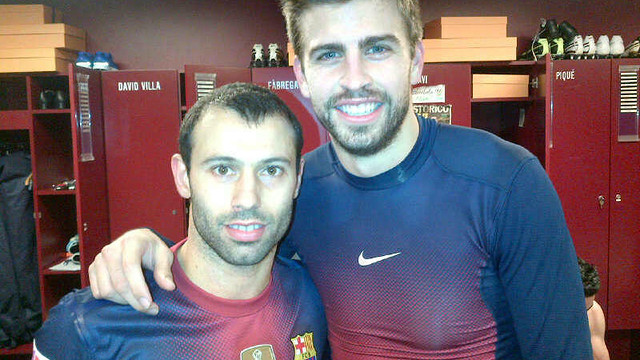 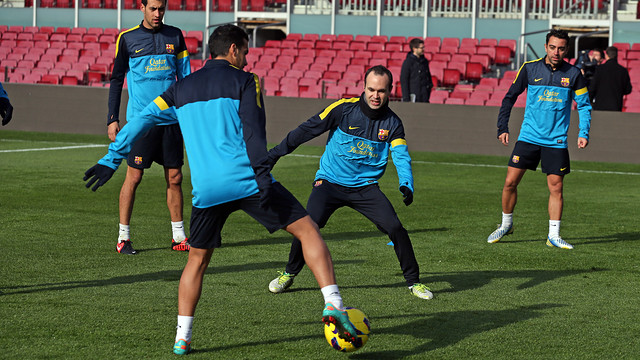 On Sunday, the men led by Tito Vilanova will visit the Benito Villamarín as they attempt to maintain their undefeated status in the domestic competition

Barça will close out the Champions League group stage on Wednesday when Benfica visit the Camp Nou. With a spot in the last 16 already secured, the Blaugrana will attempt to close out the competition’s initial phase with a victory over the Portuguese side. Four days later, Barça will travel to Seville to face Betis for matchday 15 of La Liga.

Barça will train at the Ciutat Esportiva on Monday, Tuesday, Thursday and Saturday to prepare for the two matches. On Friday, the Blaugrana will have the day off, and on Wednesday, before their Champions League match, they’ll train at the Camp Nou. 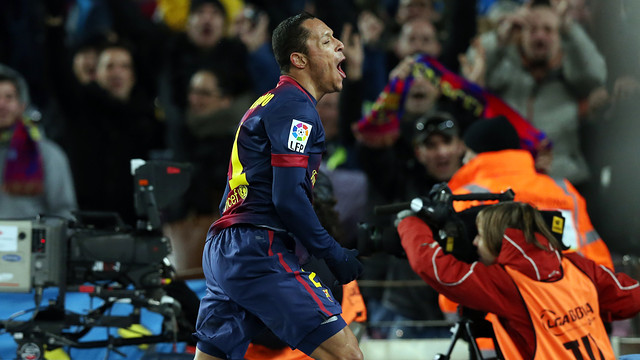 The Brazilian defender scored against Athletic Club, taking his season goal tally to five. “I’m very happy to be able to score goals for the team,” he said after the match

Barça will train tomorrow morning at the Ciutat Esportiva Joan Gamper at 11.00. After the session, Gerard Piqué will hold a press conference.

Adriano Correia has burst onto the this season’s scene as a left back capable of scoring a lot of goals. With his goal against Athletic Club, the Brazilian now has five goals in 14 La Liga matches. After the match, the Blaugrana defender said, “I have never scored so many goals at this point of the season,” he added: “I’m very pleased that I’m able to score goals for the team.”

Fourth highest scorer for the team

In Barça’s great start to the season – the best start in the history of La Liga -, Adriano, besides proving to be a great defender, has become the team’s fourth highest goalscorer. On tonight’s 5-1 victory over Athletic Club, the Brazilian explained that “we were very serious from the start, the first half was fantastic.” The Basques approached the match with an offensive mindset, and Adriano is thankful for that: “We prefer to play against teams that want to play their football, it makes you more focused and it forces to play at your best.”

The defender, who recently recovered from injury, featured in the Cup match against Alavés on Wednesday and today he was named to the starting line-up. “I had to work hard in order to recover in time for this game. I managed to do it and the manager thought it was a good idea for me to play,” said Adriano. He added: “Matches against Athletic Club are always physical and demanding.” Lastly, Adriano said, “this is probably my best season, and the team is playing very well, but there’s a lot left to do.”

Here are the statements made by Cesc and Jodri Alba after the match:

“This is always one of the most difficult matches of the year, they are always demanding.”

“We really enjoyed ourselves on the pitch because Athletic Club force you to play at your best level.”

“We did what we had to do; whatever happens in the Madrid derby is secondary.”

“We’re very proud to break the record for the best ever start to a La Liga season, but nothing is decided and we have to continue working hard.”

“The team never gets tired of winning, it’s an honour to part of this group.”

“We played a very good first half and in general we played a great match.” 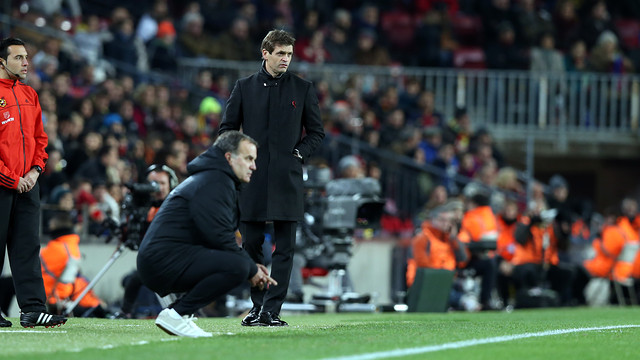 The manager praised his men for how they played against Athletic Club: “I’m sure we’ll win a lot of games and will be there when it comes time to fight for titles if we continue to play this way”

Vilanova is convinced that he’d still be on the losing end of any comparisons with his former boss, Pep Guardiola: “These past four years are unrepeatable in every regard”

Tito Vilanova has led FC Barcelona to the best start in the history of La Liga. It’s a record that clearly satisfies him but it didn’t overshadow his joy with how his men played tonight’s game against Athletic Club. “I’m pleased that we broke the record but I’m even more pleased with how the players interpreted the game.” He added: “Even though we were up 1-5 we kept on pressing them with the intention of scoring more. If we continue down this path I’m sure we’ll win a lot of matches and we’ll be there when it comes time to fight for silverware.”

“We were intense in the individual match-ups”

Despite the comfortable with over Athletic Club, the manager knew that the game against Bielsa’s men wouldn’t be a walk in the park. “Athletic have a different way of playing than the rest because they never let up, they never give you time to think.” Vilanova added that “if you don’t play at an intense pace, Athletic can make it very complicated for you.” In addition, the manager went on to say that “we were very intense in our individual match-ups, we took risks and we were on target in front of goal. Even though the end result shows a big difference, it wasn’t an easy match.”

When he took charge of the first team, Vilanova declared that he’d be on the losing end of any comparisons with his former boss. Even with the best-ever start to La Liga under his belt, the Catalan manager hasn’t changed his mind. “Those four years are unrepeatable because of everything that was done, because of the titles, because of how the team played. I’m very proud that I was part of it.” He added: “I’ve only been in charge for a very short time.” 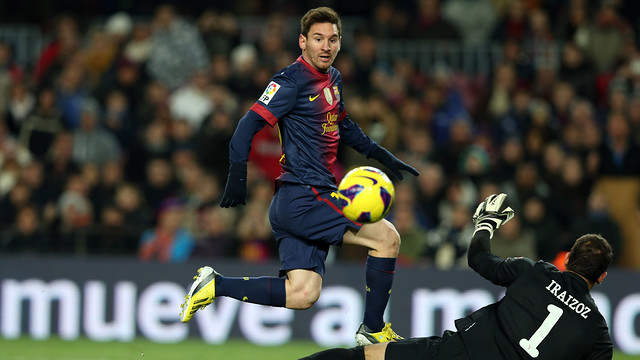 The match that confirmed the best start in the history of La Liga was a relatively placid but hard-fought win over Athletic Club. Barça’s two FIFA Ballon d’Or finalists pulled the strings for the home team as Barça treated the Camp Nou faithful to a spectacular performance on a cold Barcelona night.

The men led by Marcelo Bielsa started the match with the intention to battle for the three points. However, after the first ten minutes and with Andrés Iniesta running loose in Los Leones’ area, the visiting team knew it was going to be a long night.

Iniesta was driving Barça’s attack with a wide array of excellent passes, dribbles and vision of the pitch. In fact, the midfield maestro assisted both Leo Messi and Cesc Fàbregas.

Messi continued his quest to equal Gerd Müller’s all-time high goalscoring record. The Argentine’s now scored in six consecutive matches, and tonight was his 350th official match for FC Barcelona. In addition, he now has 20 goals this season in La Liga, and he’s only one goal adrift of Der Bomber’s mark.

The Argentine has six games left in 2012 to equal or surpass the historic mark of 85 goals set by the German in 1972.

Andoni Zubizarreta, football director for Barça, admitted that the match shows “Barça’s good teamwork” against an Athletic Club that pressured “high up the pitch.”