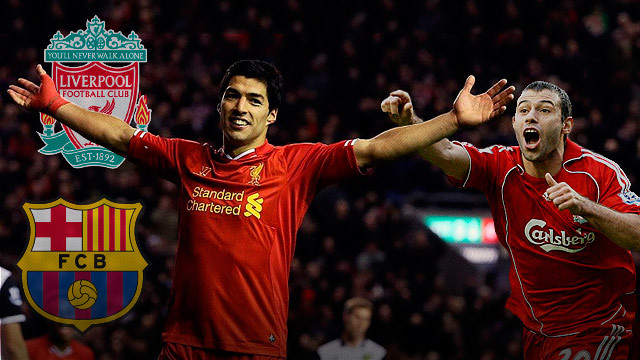 Luis Suárez is the second player to have come to Barça from Liverpool. The other is still in the squad, namely Argentinian Javier Mascherano.

Mascherano left Merseyside for Catalonia in 2010. A regular starter for the Reds, he was an astute signing by Pep Guardiola who had an immediate impact on the team, helping them to the 2010-11 Champions League, and since then has always been a regular starter under each different manager.

The FC Barcelona – Liverpool connection has also worked in the opposite direction to that taken by Suárez and Mascherano. Luis García, who came up through the youth system, and Finn Jari Litmanen both left Barça for the Premiership outfit.

Jari Litmanen went to Liverpool in 2001, after injuries had prevented him from impressing as much as had been expected of him in La Liga. . He continued to struggle with fitness at his new club, but still won the UEFA Cup, the FA Cup, the Community Shield and a European Super Cup.

Luis García went north in the summer of 2004, and won a Champions League medal in his first season under Rafa Benítez. While in England, he also won the FA Cup, the Community Shield and a European Super Cup.