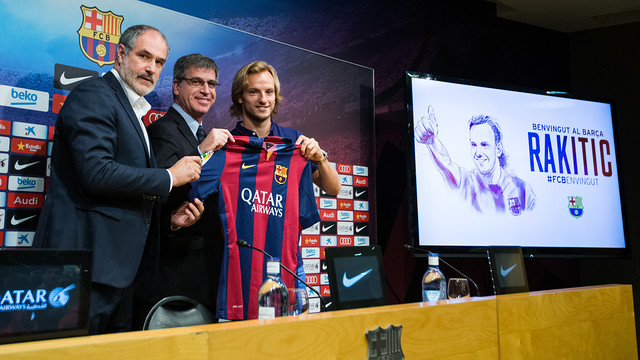 Ivan Rakitic will wear the number 4 shirt and he explained: “it’s special for me to wear the same number as Pep Guardiola. I loved the way he played the game and everything he did as a coach. I hope I can be as successful as him”, Ratikic also mentioned his country man Robert Prosinecki, who played for Barça: “ It was great to see him play – it was as if he danced with the ball at his feet”.

[[DES_1]] During his presentation as Barça’s latest summer signing, Ivan Rakitic made it clear that he’d come to the Camp Nou to achieve success: “I want to win more titles. Last season’s Europa League really whetted my appetite. I want to make history. I want more. I’m hungry for success”.

Accompanied by Club vice-president, Jordi Mestre and sporting director Andoni Zubizarreta, Ratikic thanked the Club for the interest they showed in him and joked that when he got the call from Barça “ I gave as strong an ‘I do’ as I did the day of my wedding!”.

The Croat believes: “the most important thing for a footballer is to feel comfortable and know that a Club is counting on you. I wanted to leave Seville on good terms and take a step forward in my career. Now it’s all down to me”. Rakitic also revealed that he had spoken to Luis Enrique and explained: “I’ll give the same football I did at Seville. I play with a lot of intensity, I train hard and work hard on the pitch, but I know I can improve”.

Rakitic is a versatile player, having played in the hole behind the strikers at Seville and also as a holding midfielder at Schalke 04, and he explained: “it’s important to know what the boss wants from me. What is best for the team is best for me. I am available to play wherever I am needed”.[[CITA_1]]Ivan Rakitic also reckons he’ll fit in easily at the Club: “I know Barça and their style well, I just need to train and work hard. There is a midfield full of talent and everyone who has played against them know that Xavi, Iniesta and Busquets are reference points in the game. At this Club you always have to win every game and fight for every title”.

There is a midfield full of talent and everyone who has played against them know that Xavi, Iniesta and Busquets are reference points in the game