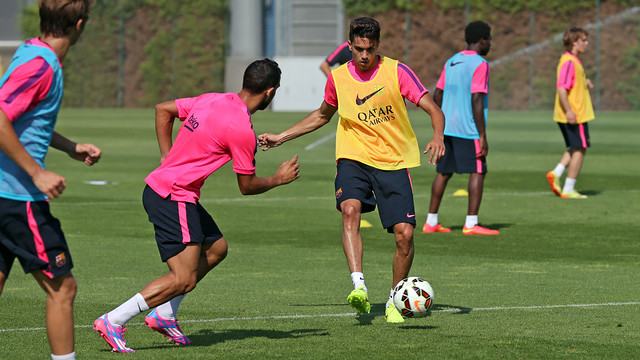 This will be the only session today, but there are two programmed for Friday

The first team trained this morning in what will be the only session of the day. Luis Enrique worked with the same set of players as on Wednesday evening, namely eight from the first team (Ter Stegen, Masip, Montoya, Bartra, Sergi Roberto, Deulofeu, Afellay and Bojan) and 15 from the reserves (Patric, Bagnack, Edgar Ié, Lucas, Diagne, Grimaldo, Samper, Halilovic, Babunski, Munir, Sandro, Dani Nieto, Joan Román, Dongou and Adama).

Adriano Correia was absent after it was announced yesterday that an abnormal heart rhythm was detected in his medical on Monday, and Rafa Alcántara is also side-lined with a bruised big toe. Luis Enrique continued using work with the ball as one of the main elements of his training schedule.

Cristian Tello, who started the week training with the first team, has now left to go on loan to Porto for two seasons.