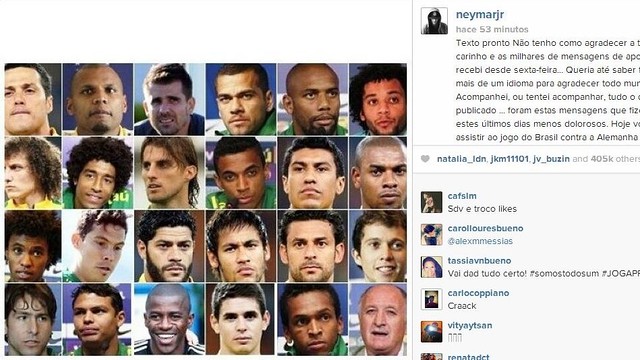 Since Neymar Jr’s injury was confirmed during the match in Fortaleza, messages of support from the world of sport and fans on social networks have been constant. The Brazilian was taken to hospital and days later to his home. “I cannot thank you enough for the shows of affection and the thousands of messages of support I’ve received since Friday,” said Neymar Jr this Wednesday.

In a letter thanking his fans and colleagues, Neymar Jr says that the shows of support “have made these past couple of days less painful.” In addition, the FC Barcelona forward makes a call to arms to support Brazil in the semi-final showdown with Germany: “I will watch the game from afar, I will be among the 200 million fans watching on – I know how important it is for the players to be supported by the fans.”

Neymar Jr adds: “Let us all cheer the team on until the final second because I want to be in the stands with the fans and my team-mates on Sunday.”